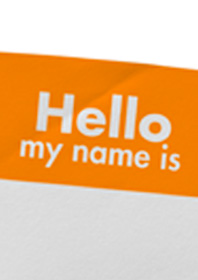 Sure, we can dish out a lot of advice—but can we take it?! Some of the CollegeXpress editorial staff decided to revisit the college application process and take a crack at one of this year’s essay prompts. You’ll find our essays below, and if you’re looking for more application essay help, you’ll find plenty in the articles here.

My father’s favorite show was The Dukes of Hazzard. “Daisy,” he suggested.

“No,” my mother instantly vetoed. “She is our daughter, not a scantily clad cocktail waitress. Anyone else?”

My middle sister was currently obsessed with Full House. “DJ!” she insisted. “What does DJ stand for?” my family asked. She didn’t know. And so they went back to the drawing board.

Mom took a stab. “What about Phoebe?” Luckily I wasn’t born on a Thursday, so she wasn’t missing the latest episode of Friends. But “no way,” the others protested. “She doesn’t look like a Phoebe.”

The task of naming me was proving to be more difficult than they had thought.

My eldest sister decided to give it a go. “I like Claire,” she stated. She was enamored with The Cosby Show, and Mrs. Huxtable’s name sounded as sophisticated as the character herself. This was something my mother could work with.

She tested it out. “Claire,” she repeated. “Claire. I think we have a winner!”

Since I was only a few hours old at the time, most likely resting after what was certainly my busiest day of existence yet, this is how I imagine the Great Claire Debate unfolded. But the story has been hashed and rehashed for years, most often when my birthday rolls around every February. My sister takes much satisfaction in the fact that she is responsible for dubbing the member that completed our close-knit family unit.

Now, you may be asking yourself, what is my family’s deal with television? Why were only fictional characters from popular sitcoms suggested for my moniker when much more special names exist, say, after a great grandmother or a parent’s childhood friend? Simply put: My family loves television. We live television. We eat, sleep, and breathe television!

But I feel like I have to defend myself here. No, my family is not inactive. Some of my best childhood memories are of my father and me playing basketball in our driveway. No, we are not unintelligent. My sisters were both valedictorian of their high school graduating classes, and I am currently in the running for that title myself. And, no, our world does not end if we miss one of our favorite shows because of extenuating circumstances. That is what DVR is for.

Families bond over shared interests, and our main interest just happens to be TV. We have lively discussions about soap opera characters and their relationships as if they were our own flesh and blood. We speak to each other in Simpsons quotes, each reference a part of our own personal language. Our love of television is something we can all agree upon, even if we don’t always see eye to eye on what to watch each night.

Television is a major part of my life, a field I have been destined to pursue since the day I was born. I plan to turn my zest for the small screen into a career in media and entertainment. And when my name appears in the byline of my first Entertainment Weekly column, I will thank my sister for not suggesting Rudy or Theo on that snowy February morning.

There is no way you can grow up in New England, specifically Massachusetts, without having the same conversation hundreds of times with your friends, even strangers. This conversation isn’t about life, dating, college, or what you want to be when you grow up—it’s about percentages. Your percentage is always the same, and the highest number always wins. The prize? Pride. But this percentage isn’t part of a math equation or some strange homework; it’s heritage.

New Englanders place a tremendous value on our Irish ancestry. When you reach back far enough, you’re able to pinpoint your “Irish percentage”; this is your number. My percentage throughout childhood was 75%, and it would always knock everyone out of the park. That is, until I learned more about the true origin of my last name, Gibbs.

My father had always been adamant that his family came to the United States via Ireland with a little of England thrown in there as well. It wasn’t until I went to Europe that I discovered “Gibbs” is not as Irish as we thought.

While Gibbs can also be found in England, my family stems from Scotland, which is where the large majority of Gibbs families are located. Gibbs can take on many forms, including Gibb, Gilbert, Gibbe, and Gislebert, to name a few. It seems that people would choose how they liked the spelling of the name, especially when it came to naming children.

In 673 A.D., there was a group of individuals from ancient Britain (the Picts) whom the Monarchies of Ireland refused permission of Irish land. This forced the Picts into Scotland, but only on the condition that all of their kings marry an Irish princess. According to the Gibbs coat of arms, the name is believed to have descended from this event. The Gibbs (among many other families) settled on Scotland’s eastern coast, and from as far back as 1120 A.D., the Gibbs name was found in Invernesshire.

From Scotland by way of Canada by way of Buffalo, New York, my ancestors and even older relatives found their way to New England and paved the path to where I am today. The name Gibbs represents a group of people who were pushed around, but persevered regardless. We might be underdogs next to the famous “Jones,” “Washington,” or “Jeffersons,” but we’ll always find a way to make the best of what we have been given.

My name tells not only my story but the story of my entire ancestry. When I look at my diminished percentage now (about 60%), I’m definitely not winning as many “Irish percentage” contests as I used to, but I’m still proud of the other 40%.

“Well, that can’t be right,” I thought to myself.

I had just found my name, nestled between Jessia and Jessie: “Jessica, Hebrew in origin, meaning rich, wealthy.” Disappointed, I let out a wistful sigh.

At 13 years old, I had never bothered to look through a book of baby names before, and I was excited for what I would uncover. I expected my name to mean something whimsical and romantic, like an old word for a mountain spring or a songbird or maybe even a term little Italian grandmothers use to describe a particularly beautiful day to be outside. (It’s-a such-a Jessica day-a! Molto buono.)

Not only was my name’s meaning far from the dreamy stuff I had imagined, it was just empirically . . . wrong.

With only one working parent and six little mouths to feed (Why, yes, we are Catholic. How did you know?), my family was far from wealthy. That didn’t bother me, though, despite living in a town where other families’ vacations to Caribbean islands were commonplace. In fact, I didn’t even realize we were different from the rest of the people I knew when I was younger, and as I got older I came to appreciate how hard my parents worked, scrimping and saving so we could live in a town with one of the best school systems.

But on that day, with the baby name book open in my hands, I couldn’t help but feel that my name was some sort of mistake. It was like reading a horoscope that contradicted what you thought of yourself: you know it’s unfounded malarkey, but it still bothers you just a little bit.

I wanted Jessica to mean something more aligned with how I saw myself: a lover of the outdoors, of music, of cheese, and certainly a lover of words. And I vowed that when I got the chance to name something, like the characters in my as-yet-unwritten-but-eventually-bestselling novel, I would make sure each name fit perfectly—or fit perfectly in its irony—right down to its country of origin. (Introducing Lea Devonshire, an English cheesemaker who lives on the same pastoral land where she raises her cows.)

But I also understood how not everyone would care about the nuanced history of a name; how could my parents even have known what kind of person I would grow into anyway? They simply picked a moniker that spoke to them (“It sounded pretty,” my mother said), and it has served me well. And, of course, now I can think of my name in terms of figurative wealth. Loving family, great friends, food on the table: those are some real riches.

I closed the baby name book. My name, like the family I was born into, was my fate, and fate I could be grateful for. Besides, a few years later, I learned that Jessica also means “God beholds,” which can easily be expanded to “God beholds a particularly beautiful day to be outside.”