Letters of Recommendation Made Easy: Who, How, and When to Ask 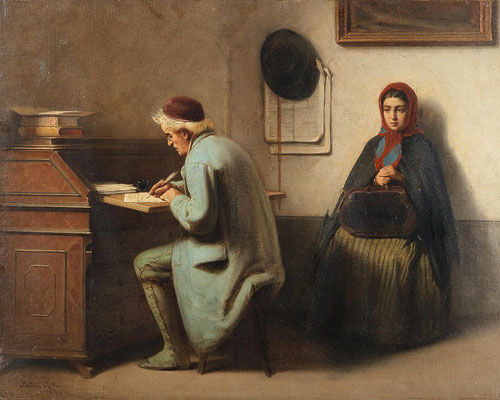 “A Letter of Recommendation” by Antonio Rotta, 1872

Along with some outstanding test scores and your high school transcript, letters of recommendation comprise a major part of your college application. When they see your test scores and grades, the admission committee knows you have the academic potential for the school, and your transcript proves you’re willing to take some chances on harder classes. Letters of recommendation (LORs) provide a window into your talents and personality from an “objective” perspective.

To be completely honest, I think the LOR process begins freshman year. The purpose of the LOR is to show your talent, leadership, academic potential, and respect for teachers (and students). The admission committee wants to see if you have any problems not divulged in your application, and they want to make sure you’ll “fit” their school. Scary, right? Well, if you play the LOR game right, the only concern you might have is making sure your teachers submit the letters before the deadline.

When and who to ask

To be safe, I would recommend asking teachers/coaches/directors during the early summer before senior year or a week into the school year. Students from across the school will be asking for letters, and with a huge number of requests, the quality of each letter might drop. To get a better quality letter, ask early.

But which teacher should you choose? You want to pick based on several qualities: how well they can write, how well they know you, your friendship with that teacher, how much interest they take in you, the college you’re applying to, and your grade in the class.

Notice how grade was at the end of that list? That’s because the grade you have in a recommendation writer’s class doesn’t have to be perfect. Shocker, right?! Although you probably don’t want to choose a teacher where your grade is below average, you don’t have to be the top student in the class to ask for a LOR. If the teacher knows how hard you worked to earn your grade, especially if you’ve asked them for help, they can testify to your dedication in the class—something all colleges look for.

Another subtle aspect is the college. It seems crazy, but if you’re applying to a school that values art over engineering, a LOR from your Calculus teacher may not be the best fit for that college. If the college values a balance of academics and extracurriculars, find a teacher who knows you both in- and outside the classroom. On the same note, choose a teacher who can speak to your talents that were either not listed or underemphasized in your application.

When I thought about my teachers, I knew there were a few experiences in my essays I consistently mentioned, so I chose teachers who could support the parts of my application that were lacking detail. For instance, my SAT scores weren’t so hot, so I chose a teacher who could elaborate on my academic potential in a STEM class.

Your relationship with that teacher/recommender needs to be solid. You don’t have to be best friends, but I wouldn’t choose someone you constantly argue with, have a grudge against, or just have a neutral relationship with. A teacher who has spent time with you (on the academic side, sports field, etc.) can paint the most vivid picture of your potential.

And don’t fish around for someone you know with a notable name, especially if you don’t know them that well. A cold, professional letter from the state governor won’t impress admission officers as much as a carefully crafted letter from your favorite teacher. You want your LOR to showcase you, not your ability to name-drop.

You might also consider the teacher’s area of study. The Common App shows the professions of your recommender that you can choose from (clergy, coach, teacher, counselor, etc.), but ask yourself how that person knows you. If your application is weak in the sciences for instance, you might pick a Chemistry teacher that you know well. If you’re a strong student but your extracurriculars are weak, you might ask a coach you played under or an employer you’ve known for a while to write the letter.

For most colleges, the Common App suggests between one and two LORs from your teachers and one from your guidance counselor. However, don’t let this necessarily be your limit. I asked for letters from four teachers/mentors and one from my guidance counselor. Having more than enough allowed me to pick and choose which letters to send to each college I applied to; I aligned certain letters with schools that shared certain attitudes.

Finally, each teacher or counselor has to fill out a scoring sheet that ranks you as a student on several qualities. Don’t forget to submit this along with the letter!

So you’ve narrowed down your list of potential recommendation writers. Now it’s time to ask. The recommender has probably written a LOR before, so don’t worry about embarrassing yourself. Send a polite, professional email or ask after class/school if they would mind writing a LOR for your college applications. Make a professional résumé to give them as a reminder of your accomplishments. Also make sure to set a clear deadline. Teachers generally have a lot on their plate, so adding your letter to their to-do list can be risky. Give them a month or so to finish, and then start reminding them once a week if they haven’t. It’s okay to ask for updates. Teachers are humans—they can forget too.

Related: Who and How to Ask for College Recommendation Letters

So, your letter is written. Now what? First you need to decide if you want to submit your letter online or through the mail. Personally, I chose to mail mine because I could submit it neatly and have the teacher’s signature in ink. I ran the risk of becoming an irritation to the admission committee, however, knowing they might have to make copies instead of printing directly from the PDF. Whichever delivery method you choose, be professional and timely. Double-check, spellcheck, make physical copies, etc. Depending on the liberties your teacher gives you, keep extra copies on hand in case you need them.

When it’s all finished…

Congratulations! You’ve submitted your letter—but the process isn’t quite over. Now it’s time to thank your teachers. Give a hand-written thank-you card and/or a small token of appreciation to each teacher. You know them best, so show your thankfulness however you think they’d enjoy it.

One aspect I worried about was my recommender’s writing ability. If a teacher had a run-on sentence, wouldn’t that degrade the teacher’s testimony and ruin my chances? (I know—I’m paranoid.)

It turns out that’s less of an issue than you might think. According to Yale’s admission office, the more heartfelt and unfiltered the letter, the better—regardless of grammatical errors or letter length. In fact, the longer the letter, the less likely it is to be read fully. So don’t worry if there are any grammatical errors (as long as they aren’t glaring), and don’t pressure your recommender to write too much.

How to Improve Your Admission Chances After a Low Test Score

Should You Write Your College Essay Now?

Carson is a senior at Reicher Catholic High School. He enjoys playing soccer, following politics, participating in robotics, reading, and working in grassroots campaign movements. Carson hopes to major in Philosophy and Economics, minoring in Arabic. Long term, he plans to attend law school to become a civil liberties attorney. He hopes to share his insights on the college admission process, sharing his experience with students who aspire to attend elite universities in the United States.