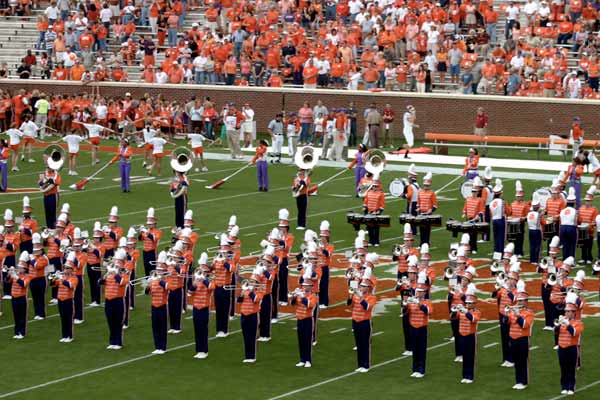 Last spring, like most other high school seniors, I had a huge decision to make: what college would I attend next year? After a lot of research and endless college visits, I finally made my decision. I decided to attend Clemson University in South Carolina. Choosing Clemson was the best choice I have made in my life thus far. I love it here. My second-best decision was joining Clemson’s marching band, aka Tiger Band. When most people hear the words “marching band” they automatically assume it’s “lame” or “nerdy.” Those people could not be more wrong. Tiger Band is quite the opposite—it’s full of amazing football, once-in-a-lifetime experiences, and great friends. Here are just a few highlights of my experience so far!

I grew up in a small town on the south shore of Long Island. Although football was a big sport in my town, it wasn't nearly as big as lacrosse. When I joined Tiger Band, I knew a lot of my free time would be spent at college football games. I’ve heard a lot of good things about college football, but nothing prepared me for this experience. There’s nothing quite like a game in Clemson’s Death Valley; the team’s entrance isn’t called “the most exciting 25 seconds of college football” for no reason! Tiger Band allowed me to go to all the home games hassle free: no waiting to get tickets and no waiting to go into the stadium. Not only was I able to go to all the home games, I was also able to go to all of the away games. What’s better than cheering on your favorite team all over the country with 365 of your best friends? Which leads me to…

What college freshman isn't worried about making new friends at school? Tiger Band allowed me to make friends even before classes started. I moved in a week early to attend band camp. Throughout band camp I built relationships with all different kinds of people. You don’t need to be a Music major to be in band.  Most of my fellow band members are studying Engineering or Biology or English.  Within a week I had already made more friends than I thought possible in such a short amount of time. I have met some of my best friends because of marching band, and I honestly think that I will be friends with them for the rest of my life.

As I write I am currently on a bus to the College Football National Championship in Tampa, Florida, where the Clemson Tigers will take on the Alabama Crimson Tide for the second consecutive year. Pretty cool, huh? This is my third time traveling to Florida this year, strictly because of Tiger Band. Last week I was in Arizona for the semifinal playoff, where my team beat (excuse me, crushed) the Ohio State Buckeyes. Tiger Band has allowed me to travel to five states in one season (Alabama, Georgia, North Carolina, Arizona, and Florida). Some members even got to fly to Boston for a game. My band did a lot more traveling this year than other bands may have, because our football team has gone “all the way.”

Now you may think that these trips are all work and no play; however, there is more to it. Yes, the main reason for going on these trips is to bring spirit to the football games and to support the team, but there is also a fair amount of free time built in. Usually we have time to go to dinner with friends, hang out, or just explore the town. This past weekend in Arizona, I went hiking with a lot of other band members and had a great time.  It’s such a great feeling running into fans on the street and yelling “Go Tigers!” in a state on the other side of the country. This weekend we are headed to Tampa for the championship game. Yes, we have multiple performances and rehearsals, but we also get to go to Busch Gardens and have a decent amount of free time to do whatever we wish, which is a huge perk.

There is nothing on this Earth like game day in Clemson, South Carolina.  Games in Death Valley are second to none. I can’t advocate for other college bands, but Tiger Band starts off every home game day the same—with rehearsal. At rehearsal different sections have different game-day traditions, but you’ll have to join Tiger Band to find out about those. Following rehearsal we have some free time before our call time.  I’ve seen members use their time differently: some students study, while others grab something to eat or just hang out with friends.

Then it’s time for the real fun to begin.  We gear up in our uniforms and head out to the amphitheater for our pre-game concert, where we play some music for Tiger fans. After this comes my favorite part about game day—the parade down the hill to the stadium. We line up and begin the parade, and there are screaming fans wherever you turn. Nothing beats the feeling of seeing little kids in Clemson gear reaching out their hands for a high five from you.  Once the parade is over, we go into the tunnels and hang around for a bit before running onto the field to perform our pre-game show (and then later at halftime). But that feeling you get running out of the tunnels and onto the field in the beginning of pre-game is like no other. Playing Tiger Rag in front of 80,000 people as the football team runs down the hill is truly an indescribable experience.

Are you (or were you) a part of your college’s marching band? Give a shout out in the comments!

Should College Student-Athletes Be Paid?

Georgia Krendel is a freshman Political Science major at Clemson University. She is originally from Lynbrook, New York. She plays the trombone in Clemson’s marching band, pep band, and concert band. She played in her high school’s jazz band, pit orchestra, orchestra, and wind ensemble. In her free time she likes to snowboard, horseback ride, and travel. Georgia has been riding horses since she was seven years old and has been showing competitively since she was 12. She played softball through high school as well as volleyball for multiple travel teams.