Sometimes, the best way to save money on college is to have less college to pay for . . .

Sometimes, the best way to save money on college is to have less college to pay for . . .

When you think about the cost of college, do you experience:

If you suffer from one or more of the previously mentioned symptoms, you may have College Tuition-Induced Anxiety (CTIA)*. CTIA is a common condition that affects thousands of incoming college freshmen each year. It is described as having an anxious response to the thought of having to pay for an undergraduate education, usually because one does not have the funds readily available to him or her. (*Okay, this condition isn’t listed in the Diagnostic and Statistical Manual of Mental Disorders . . . because it’s not exactly real. But stick with me here!)

Under the assumption that it cures most cases of CTIA, high school counselors often prescribe the traditional course of action to students: complete the FAFSA, then apply for scholarships, and finally, if necessary, gain employment at a part-time job. While this formula works for a select group, the success rate is nowhere close to perfect. You might be one of the many students who earn little money through these channels, which in turn causes a worsening of your mental state. Further frustrated and frazzled, you may have even considered taking on the debt burden of student loans. You understand that symptoms will reappear around one to six months after graduation, but you'll do just about anything for temporary relief.

Although your prognosis seems bleak, it actually isn't. There is an alternative treatment available for CTIA, one you've probably never heard of. I discovered it after also trying the traditional three-step approach, but coming up without nearly the amount needed. Instead of continuing to focus on obtaining money, I would deal with the root of the issue: time. I would reduce my college costs by only attending my university for two years and earning the remaining credits through cheaper and less time-consuming methods.

As I wasn't exactly sure how to accomplish this goal, I sought out suggestions from counselors, teachers, peers, and online forums. During this quest, I stumbled upon several credit-earning options, including various courses, exams, and activities. One of my favorites was CLEP exams. Similar to AP Exams but generally much easier, CLEP exams are simply exams for credit. You show up at a testing center, sit for an exam, receive your score, and, depending on your score and your school's transfer credit policy, earn college credit. In total, I invested around 10 testing hours and approximately $600 on CLEP exams. Not bad, considering I was awarded 30 semester credits and fulfilled a variety of general education requirements. Or in layman's terms, an entire year of school and a whole bunch of classes with virtually the same material I learned in high school.

In addition to CLEP exams, I earned credits through a pre-college summer program, dual enrollment, and intersession abroad, among other things. I also used my time well by taking a full credit load during one of the school years and extra classes over the summer. I by no means had to give up my college experience; all of this did require some sweat equity. However, my hard work definitely wasn't for naught. At age 20, I graduated summa cum laude with a bachelor’s degree in business administration. Even better, because college ended up costing nearly half my original estimate, I had just enough funds from university scholarships and part-time work to cover it and walk away with my diploma debt-free.

Are you eager for a clean bill of health? Give the alternative therapy a try and get through college faster. Regardless of whether you shave off less than a semester or more than two years from the standard four (or more coming nowadays, five or six), you'll reduce your overall college costs, including tuition, books, and fees. And the best side effect? Since you'll graduate early with possibly little to no debt, you'll have the time and money to start chasing after your dreams much sooner than expected. So even though it's not typically doctor recommended, the quick fix sometimes is the right solution. 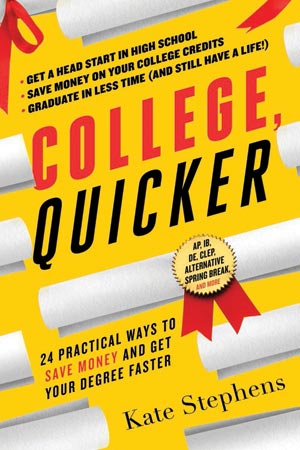 Kate Stephens is the author of College, Quicker: 24 Practical Ways to Save Money and Get Your Degree Faster (Sourcebooks).