College Loans: Why You Need to Look Before You Leap 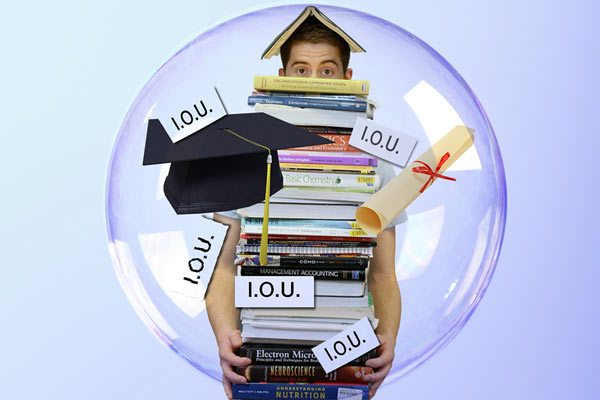 For many, education is the key to success. But it has become more and more financially demanding to get a college degree in America. The ideology of the “American dream” has been cast away as a mythological idea constructed by foreign lands. Those who live in the financial crisis of student debt feel that loans have denied their possibility of ever achieving the American dream, as the chains and weight of paying off that debt is filled with fear, shame, and disappointment.

In July 2015, AJ+ released a video capturing the thoughts of students on their college debt, titled“Faces of the Student Debt Crisis in America.” In the beginning of the video, students describe their student loan debt in a single word.  Their responses include “cumbersome,” “crushing,” “inflated,” “astronomical,” “overwhelming,” and “negative.” The video is an emotional ride, but eye opening. It helps reveal the faces of students struggling in the depths of student loans, and also portrays the underlying idea of American universities’ treatment of their students as consumers rather than pursuers of education.

Currently the United States has $1.2 trillion in student loan debt—one of the largest types of personal debt. The number in itself is terrifying to accept, but it is necessary in order to move forward and realize the struggle to pursue an education in America. Due to a moving idea that “education is not worth it,” some students are less prone to try and work against student loans and decide to not pursue post-secondary education at all. In many cases, students fear the inability to balance cost of living expenses and an education and want to avoid the anxiety all together.

Those who do pursue higher education and need financial assistance seek out the offices of financial aid and are prone to receiving student loans. Many students are unaware of the reality of a future with those loans, but for some it is their only choice. Some are the first in their families to seek post-secondary education and become fascinated with the idea of being the first to receive their degree. These students envision completing their degrees without the need to place any financial burden on their families.

The idea of becoming in debt because one decides to reach out for student loans is often condemned in American society. It is seen as something that an individual “got themselves into.” But from primary and secondary schooling, young people are constantly encouraged to receive a college education at all costs and to sacrifice for a degree, one that will help them achieve the American dream. This condemnation from society can ostracize individuals who feel that the sacrifice they made for their education was not worth it, and so students begin to feel trapped and helpless, often leading to prolonged consequences—financial and otherwise—down the road.

It is not to deny that student loans are not useful; it’s simply that many students are unaware of how they work. Therefore it’s essential for students to learn about the responsibility that comes with student loans. Educate yourself about different types of loans, interest rates, and payment plans. And always seek out other sources such as scholarships and grants that don’t need to be repaid. You will thank yourselves later when you avoid taking on more debt than you need to, all because you took time to apply for free money.

Of course, students who are fully aware of the consequences of loans and how they could affect life after college still pursue this path. For those students, that is their sacrifice for their education. Student loans are the image of salvation for many, but remember: it is a salvation with a price.

I am a very unique person who has a passion for English and literature. I love reading books and completing new writing assignments. I am also a fan of music and very much enjoy classical, instrumental, and post-rock. (I also play the flute and piccolo). I hope my writing is fun and joyful! :)