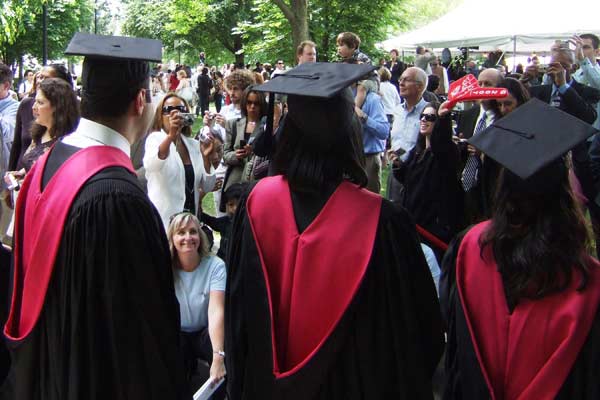 You survived the undergraduate process, and now you’re ready to further—or change—your career. A great means to that end is graduate school. If you’re like many people considering this fairly momentous decision, you’re probably wondering what the experience is like. Often, it helps to talk to someone who’s been there. So that’s what we did.

In person, online, or both: In person

I wanted to specialize and hone my expertise and also have the opportunity to go into academia, as well as for networking purposes.

How did you find the right program for you?

At the time, yes, it was exactly the program I was looking for—on paper—but as it turned out, the program was really all about what you made of it. My courses were primarily project based, very little to do with theory, and surprisingly lacking when it came to lectures and guest speakers. I had chosen to go to Germany because I had attended a semester there as an exchange student during my bachelor’s studies. The program was extremely affordable at only a few hundred euros per semester rather than the $40,000 it could’ve been in the States, and the facilities were amazing. I spent a full year in an intensive German program. Then, the day before my final German exam, I learned that I could now take the program in English! But it was a good thing I stuck with the intensive German, because most of the professors spoke limited English and the assistant professors, librarians, and staff spoke little to no English.

The program and the school took a long time to get used to, as it was never clearly defined what was expected of you. I found much of my course work, the grading system, and even the work of my peers to be lackluster. (Many Bauhaus students preferred to work with me just because I was reliable and hardworking.) The whole grad/undergrad relationship is not clearly defined in Germany. They do not have the same emphasis on thesis work, instead doing more course work.

Did you engage in graduate student life activities and if so, what?

I didn’t do as much as I did in my undergrad. There was an international student group I took part in, but social life in Germany isn’t so much about being active in student life. It’s more about going to the right cafe or sitting in the library or the park and debating. I was a part of founding an official club for working with media and children, but that was more on a social basis then an academic one.

Did you have a fellowship or assistantship, and if so, what was your experience like?

I did two assistantships, which was almost unheard of in Germany as most students do not work and study at the same time.

Did you hold a job during grad school? If so, how did you manage your schedule?

I worked as an assistant but also taught English and did some catering on the weekends, so there were a lot of late sleepless nights. But I was more or less working to pay off my undergrad loans and for my rent and food rather than for my grad school expenses. Many German students get assistance money, so they don't work at all or just might hold a part-time job at a bar or coffee shop.

What effect did attending graduate school have on your career?

It expanded my portfolio and helped me establish contacts and connections in Germany. It gave me time to develop my vision and my style both personally and professionally.

What would you do differently?

I might have taken a different program at a different German university like in Cologne or Berlin, something a bit more structured. But I would still advocate for getting a graduate degree abroad; you find yourself and learn so much about a culture and a place when living and studying there. Additionally most grad schools in Europe are very reasonably priced, and many offer English programs, so they allow you to focus on your studies, not your student loans!

What advice can you offer students pursuing a similar program?

Try and get to know that country before you commit to studying there long term. A two-to-three-year commitment is a lot, and it takes a while to adapt to the other cultures teaching and learning styles, and it may or may not be right for you.

Any advice regarding paying for school and pursuing financial aid?

In Germany you are required to have proof of a $600 a month income, either from family or a loan, and you are only allowed to work 400 euros a month on a student visa, but other countries might be different. The program prices may vary too; my language courses at 1,000 euros cost more then my entire master’s degree at 180 euros per semester. So in all it is very affordable, and some of the universities here are world leaders in their fields, especially in mathematics and physics.

Bonus question! What was your favorite class and why?

I had this class called Processing, and we got to make artistic installations with programming and wires and it was just so different from everything else I had done, so I really enjoyed that.

The City University of New York