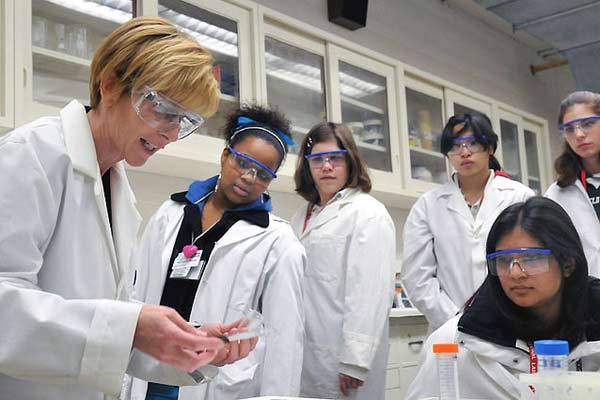 We all know at this point that women’s involvement in STEM fields—science, technology, engineering, and math—historically has been low. While there has certainly been progress in recent years, especially in the areas of biology and chemistry, their numbers still lag far behind those of men. In the most striking example, National Science Foundation research shows that while women make up 47% of the national workforce, they only represent 4.5% of mechanical engineers in the United States. To say that this percentage is higher than it once was is, frankly, not saying much.

Scholars and researchers have posited diverse theories for these inequalities, including biological and social explanations, implicit or feared discrimination in the field, and a lack of early educational opportunities in STEM. Regardless of the explanation, however, women show a nearly equal interest in STEM to men during K-12 development: the disparities begin at the higher-education level. According to a 2009 study by statistician Berry Vetter, 14% of boys and 10.5% of girls will complete the courses required to pursue a career in STEM early in high school. However, the numbers quickly drop after that point: women make up only a quarter of those pursuing science degrees in college, and half of those women later switch majors (most often due to loss of interest or discouragement). Women make up only a sixth of those who move on to Ph.D. programs in STEM. This is not only an issue of equality for women; the explosive, exponential growth of available STEM positions over the past several years means that, without women, large gaps will emerge. There will simply not be enough men to staff all those STEM positions that require graduate-level study.

How do we target this gap, which appears to yawn widest at the point of graduate admission? Luckily, it has been widely noticed and publicized over the past few years. In early 2013, President Obama called on the nation to support the growth of women in STEM graduate programs and in general. The Office of Science and Technology Policy, in collaboration with the White House Council on Women and Girls, has made a mission of increasing female participation “by increasing the engagement of girls with STEM subjects in formal and informal environments, encouraging mentoring to support women throughout their academic and professional experiences, and supporting efforts to retain women in the STEM workforce.”

Graduate institutions have taken the cue, and schools like Eastern Michigan University have used federal grants to attract women to growing STEM departments. Other institutions have recently made the news for their efforts as well: Texas A&M University seeks to close the gender gap in engineering positions throughout the region by admitting increasing numbers of women, while the University of Iowa’s Girls Go STEM program seeks to attract and retain women in STEM graduate programs by successfully fostering an interest in STEM projects among younger students. The Institute for Broadening Participation maintains a growing list of STEM opportunities for women, including scholarships, fellowships, and specific institutions that are known to foster women’s growth. It is evident that many graduate STEM programs have begun to shift their focus more heavily toward the recruitment of women even over the past year.

Researchers at NSF note that there is still a significant amount of growth necessary to ensure that female graduate STEM students enroll and complete their degrees. In order for enrollment to continue to rise, it is necessary to prepare graduate students for career obstacles by offering mentoring services and dialogues on career opportunities and work-life balance. Programs must take steps to eliminate the subtle prejudice and biases against women in STEM higher education, especially by incentivizing and supporting graduate students themselves to promote these ideas. Researchers have proposed new types of equality training and mentor connection websites to promote these changes. It is also necessary to implement change on the classroom level: in recent weeks, a study by Piazza (an online platform dedicated to higher-education information dissemination) revealed a much lower average confidence level in women STEM college and graduate students than that of men, as measured by their comfort level with answering questions in class. Change can only be affected by getting students and teachers themselves involved.

While women’s enrollment and graduation rates are rising in graduate STEM programs, it is necessary that we continue to focus on finding our way to the root of the problem and taking steps to provide support and opportunities for women at every level. With millions of computer programming and engineering jobs opening across the country over the next decade, the need for highly trained, confident women in STEM is greater than ever. Luckily, progress is being made almost daily.

Should You Go to Graduate School During the Pandemic?

Jessica McCann works in research communications at Harvard University as well as a freelance writer and editor. She graduated in 2004 from Northeastern University with a BA in English and a minor in international affairs, and in 2017 with a master’s in English Literature from Harvard University Extension School. Outside of work, Jess is usually doing yoga, running, traveling, or eating ice cream cones on the beach.