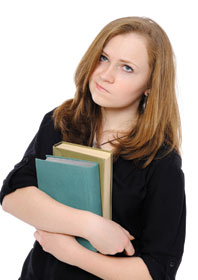 Choosing a college major can be difficult—it takes a lot of self-exploration, in addition to knowledge of the current and future job market. Luckily, it’s easier than ever for students and parents to find tools to help decide on a degree: websites, personality tests, employment statistics, and so on. Of course, just because you have the tools doesn’t mean you know how to use them . . .

There are many aspects of choosing a major that students often overlook, along with many questions they should ask themselves: What if I have to change my course of action? What can I do to enhance my degree? What is my next step? The admission and career experts here know exactly how to use those tools, and they know how to build the perfect plan for that seemingly distant end goal: getting a degree.

So put on your hard hat, prepare your tool belt, and get ready to deconstruct the search for your perfect college major.

Students who have always known the career they want are part of a lucky few. But even if you have your heart set on a particular job or field, it’s important to explore your options before applying to college. Why, you ask?

“Developmentally, students are not ready to make a [career] choice at 18, yet we force them to do that,” says Virginia Gordon, Dean Emeritus and adjunct associate professor at the Ohio State University, and author of Selecting a College Major: Exploration and Decision Making and Foundations: A Reader for New Students. “There’s a pressure on students to make a choice early. Unfortunately, most universities now make curricula so finely defined that it’s hard to explore without worrying about time.”

Gordon says one problem high school students have is a lack of exposure and experience in different kinds of work. If high schools don’t offer experiential opportunities, students should take it upon themselves to find a range of jobs or service options in fields that interest them, including internships or even job shadowing opportunities.

Gordon has observed cyclical trends in major decisions over the years. The media has a great influence on students’ career choices, she says. For example, when hospital TV shows were popular, there were a lot of pre-med freshmen. The same thing happened with legal TV shows, leading many students to enter pre-law.

Gordon also points out the dependence on surveys that show the number of job openings in a certain area, or which particular degree fields are in higher demand. “Parents are always looking for the hot jobs, and that’s really misleading,” she says. “By the time the student has entered the workforce, those jobs have changed.”

Elizabeth Venturini is a college and career strategist and the founder of Scholasticus, an advising practice where she helps teenagers and their parents through the entire admission process. In recent years, Venturini has found students much more in tune with themselves and their competition. They know the importance of their strengths and weaknesses, likes and dislikes, and their learning and work styles. Students also know that standing out among their peers is more important than ever. As a result, students and their parents are starting their college search much sooner to better prepare for the differences in admission requirements and deadlines among schools.

The search process doesn’t end at high school graduation. Students need to continue exploring majors, and those with a few fields in mind need to narrow their search. Even students who have their hearts set on a major should keep their options open—it’s estimated that up to 50% of college students change majors!

Carolyn Yencharis Corcoran, Assistant Director of the Insalaco Center for Career Development at Misericordia University in Dallas, Pennsylvania, has been a career advisor for eight years and has worked in higher education for over 13 years. She admits, career bliss can be a moving target. “Even if you love what you’re going into, you’ll always ask yourself, Is this what I’m going to do for the rest of my life?” With that in mind, she always asks her students what they want to do right now. It’s easier to tackle a major and career choice if students look at their future in smaller pieces.

For most students, since it’s their first time being fully independent, college is a place for exploration, Yencharis Corcoran says. Like most schools, Misericordia doesn’t require a declaration of major until the end of sophomore year, so students should make the most out of their time by taking a range of classes, attending events and activities, joining clubs, and interning.

While at college, it’s essential that students define their academic/major goals. Then, they need to figure out how to best spend their time at the institution to reach that objective. Things like getting involved, networking, or interning are all important steps to reaching whatever goal has been set for the student.

Andrea St. James, Career Counselor for the College of Arts and Sciences at Western New England University in Springfield, Massachusetts, says some students enter college with a major in mind, but they want to test it first by taking a few classes. “Find out where your natural strengths lie,” she says. “We want to capitalize on those natural strengths because with a little work, students can use those to be successful, passionate, and engaged.”

Despite popular belief, entering college undecided isn’t the end of the world. Students have a plethora of resources available to help them explore their options and make a decision.

Venturini emphasizes doing as much research as possible before entering college. “With high tuition costs and a tight job market, today’s high school student needs to be researching college majors and potential career possibilities before they leave high school,” she says. Without some familiarity with their potential major options, students may end up taking useless classes and, as a result, spend additional years in college trying to make up for lost credits. This, of course, means spending more tuition money—and not all scholarships extend past four years.

When students enroll undecided, they just need to be honest with themselves about it, Gordon says. “Many are afraid to admit that they’re undecided, and that’s a big mistake. They should be as open as they can . . . and take advantage of all the resources. Even small colleges have career counselors and academic advising centers,” she adds. When working with students, Gordon often gives them a list of majors and asks, Which ones would you absolutely hate doing? The elimination often helps.

Gordon adds that no matter what, students should always look at their current and potential majors as tentative. While they take required classes, students should enroll in courses in other areas to explore their interests or confirm whether or not their current major is the right choice. Many go through the curriculum at such a locked step that later in life they may find it’s not exactly what they want out of their career.

Even for those who do have a major, it’s important to have a back-up plan. St. James says she talks about plan A’s, plan B’s, and more with her students. If students put all their eggs in one basket and it works out, that’s great. But if it doesn’t, it really throws them for a loop. She then asks students a range of questions to sort out their next steps: What can we do to prepare you to get to the next point? What tools do we need to put in your toolbox? What skills do we want to put on your résumé?

“You can take a [personality] test, but if you take it and see 15 career options, that’s not going to provide you with any perspective,” St. James says. “Look at what abilities and activities come naturally.”

What else can students do during college to help develop a well-rounded résumé and prepare for their dream jobs? Nowadays, it’s about much more than just a degree on your wall, especially if it’s one of those majors that are far less “buzz-worthy.” Many may call degrees in English, psychology, or history less relevant since they’re seeing high unemployment rates. But in the end, that doesn’t change the fact that students may have their hearts set on these majors.

Venturini says there are still many graduates who select majors that offer less chance of employment, and thus, less of a return on investment in their education. But that’s no reason to completely eliminate a major.

“Students should research their chosen industry for employment projections, education required, years of experience, major tasks on the job, and starting salary,” Venturini says. “If they still intend to major in a degree that offers little chance of employment or a low salary, then double-major in a field that can provide an income until they are a proven professional in their chosen occupation.”

St. James is an advocate for adding a minor to the résumé as well. “For the future—and even the present—it expands your knowledge of a different area. You gain perspective and might find something you’re passionate about,” she says. “It will also show to future employers and internship [coordinators] that you have an educational foundation and you’re looking for practical application.”

Gordon emphasizes the importance of real-life experience, suggesting students have at least two internships, in addition to work outside of college and volunteer opportunities. “I asked students to fill out a résumé of the person they’d like to be when they graduate,” she adds. “It’s not so much what an employer wants from you, but what’s important is what you can give to an employer.”

Regardless of the alleged “employability” of a major, the most important thing is graduating with a useful skill set. “It’s the whole idea of being adaptable and preparing yourself to make change,” she says. “If you’re a person who doesn’t like change, you better learn to cope with it, because it’s a part of life now.”

Think to the future

Venturini recommends college students contact their school’s alumni offices to speak to graduates in their fields of interest. This will not only give students insight on a particular major and career choice, but also enable them to learn how the school’s program prepared the alumnus for success. “Students should research their future college major and school just as if they were researching for a job within a company,” she adds.

Undoubtedly, it’s intimidating to think of the long-term effects of the major decision, but Misericordia’s Yencharis Corcoran says students need to figure out what they want to do next, versus 20–30 years from now. What it comes down to—for all majors—is the ability to communicate the skills and strengths you’ve gained during college, and how to properly communicate that to employers. An important thing to keep in mind: “When choosing a major, you may not necessarily be choosing a job,” she says. Hiring managers are looking for skills and experience, and students can put together knockout résumés regardless of the degree field they choose.

In the end, it’s all about knowing yourself: what you want after college, what makes you happy, and how to best use your abilities. If you use your school’s resources to your advantage, you’re giving yourself the solid foundation needed to build a successful future.