How to Choose a College Major When the Options Seem Overwhelming 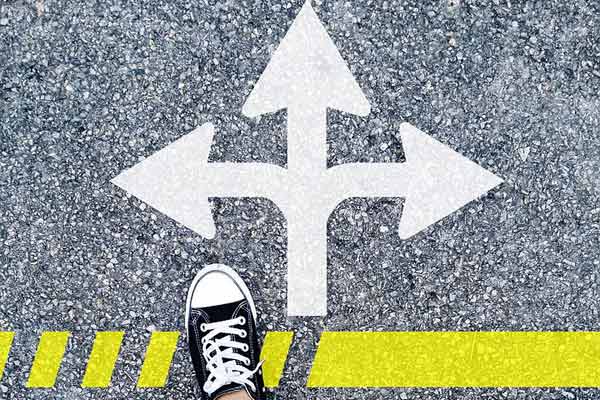 Choosing a major can become overwhelming when a school offers hundreds of programs, concentrations, and other degree options. If you aren’t quite sure what you want to study in college, this advice from real students and grads can help.

A former Stanford professor with three degrees, three children, and hundreds of published articles once told me he had not decided what to do with his life yet. In fact, he simply loved to learn, finding that when he was curious about a topic, he sprang out of bed in the morning—excited to begin his day. But even he had an original major: Electrical Engineering.

College course catalogs can seem overwhelming the first time, and the second time, and the third time you open them. Like the professor, while you certainly don’t have to be limited to a single career for the entirety of your life, you do have to make class selections and (hopefully!) work toward a major that you find captivating.

“My advice…is to work for some time within a field you are considering,” Johnson says. “This is the best way to become acquainted with the field.”

Luckily, Johnson found his interest with the first job he took as a pharmaceutical clerk.

“I decided on Pharmacy after working at my job for a few months—I enjoyed both the people and the career from what I could see,” he says. “I had been only slightly interested until my dad showed me the job opening. I applied, got the job…and then started to become very interested after working there for a short time.”

During his shift, Johnson enjoys every aspect, from the customer interaction and problem resolution to organizing prescriptions and prepared expired medications to the sweeping. He can genuinely see himself in this type of position in his future, he says—which can be key to choosing a major.

“If you do not like the field at the bottom, odds are you won’t like it higher up either,” advises Johnson. “So try jobs in different fields until you find something you like.”

He plans to attend Bismarck State College for one year before enrolling in North Dakota State University’s full Pharmacy program.

With less specialized fields, however, choosing a major is not the same as choosing a career.   Stanford graduate Caroline Grueskin, now a crime reporter at The Bismarck Tribune, didn’t get into journalism at all during college—in fact, she obtained a Philosophy major with a minor in German Studies and honors in Ethics in Society. What she did do was explore different subjects.

“Take the classes that interest you,” she says. “They'll help you find the right path. And don't shy away from the classes that look hard. When I signed up for my first philosophy class, I had no idea what I was doing, and I was the only freshman. The professor told me, ‘I usually let students make their own mistakes.’ So, I went for it and, with a lot of help from a great teaching assistant, picked it up fast.”

Grueskin maintained an interest in criminal justice debates and took internships with prosecutors during college; her first job was in a business position at a nonprofit news site, where she first noticed what the news team did. Like Johnson, she found a deep interest from working firsthand in a related position.

“Nothing beats the thrill of a good scoop,” Grueskin says. “And I love helping people tell their stories.”

Still, she does not believe that majoring in Philosophy was a detriment to her now seemingly unrelated career as a reporter. In fact, she credits skills learned in college to helping her in journalism.

“My philosophy classes taught me to be skeptical: how to read and listen closely for bad arguments and their cover-ups,” she says. “That's valuable to me almost every day as I interview people and try to get to the bottom of a story.”

To Ruben Krueger, a valedictorian from Newport, Oregon, engineering seemed his primary goal—for nearly two years, he remained focused on obtaining that type of degree. But “after some introspection, I have decided against Engineering and am interested in Mathematical and Computational Science,” he says. “One of the reasons for this change in majors was my realization that I have more of an interest in math rather than the design process of engineering.”

Realizations such as this stem from research about the specifics of a major, whether it is determining the types of jobs available for graduates or perusing samples of four-year university program requirements and classes that form the major’s core skills. Even though Krueger is pretty certain which major he will pursue, however, that does not mean he knows his class schedule yet.

“The process in between acceptance and move-in day is very exciting for me. Despite the fact that no one enjoys filling out forms, to me, I feel that these forms bring me one step closer to college,” he says. “I, in fact, finished all of my forms a few days after they were released. I haven’t decided what classes I’m going to take yet, but I feel the process has been fun.”

As long as you are aware that you may have to make some sacrifices if you enter a less traditionally marketable major, you should choose what you enjoy. Krueger recommends a practical approach as well: while obviously you hope to enjoy your major, it remains important to think about financial considerations.

“Pick the school which will challenge you the most and you’ll grow as a person the most, and…pick a major you can find employment in,” he advises.

Rising freshman Aaron Kaufer has chosen Math as his major not simply for its marketability but also because he has always had an interest in the subject.

“My earliest memory dates back to me at age four, arrogantly bragging about being able to count to 100. Basically, I just like math,” Kaufer explains. “Each new problem is like solving a tough puzzle. It’s rewarding when you solve it, but also more importantly, the putting the pieces together is what you enjoy.”

Applying to colleges while knowing his future major meant Kaufer did extensive research on the Math departments of selective universities. For someone who has not decided what to study, however, he recommends taking whatever classes you like to help you find the major that’s right for you.

“Seriously, go crazy,” he says. “Ever laid back and looked at the stars and thought, ‘Man, it would be cool to know more about this stuff?’ Then go take astronomy. I genuinely think that everyone has that little sweet spot of what they love to do—don’t just settle for something that seems right. Wait until you’ve found the sweet spot and stick to it.”

Related: How to Choose Your Major (or Not)

Tags:
college majors choosing a major how to choose a major majors and academics