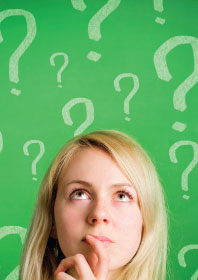 When Kyra Ellis-Moore arrived on the Amherst College campus three years ago, she had some idea of the course of studies she wanted, but nothing she could pin down and call her ideal major. Now a junior double-majoring in law, jurisprudence, and social thought as well as sexuality, women’s, and gender studies, Ellis-Moore realizes that embracing her indecision was exactly what she needed. “I ended up taking a lot of subjects I wasn’t exposed to in high school,” she says. When she found ones that interested her, she had the freedom to explore them.

Like Ellis-Moore, college students are learning that uncertainty about their college major isn’t such a bad thing. Many experts say that freeing high school students from making such an early decision about college majors might even help them land closer to their eventual goals.

Years ago, college students stressed about the end-of-sophomore-year deadline when they generally had to declare a major. But today’s students often feel the pressure much earlier, sometimes in high school, when well-meaning parents or advisors try to guide them to a college and a course of study that will land a solid job after graduation. With college increasingly seen as a pre-professional step to post-graduation employment, students feel there’s no time to waste choosing a major.

So before you decide your debate club experience in high school must mean you’re destined for the pre-law track, consider that exploration and finding out what makes you tick is just as important to picking a major as your possible future career.

“Not every high school student has a passion,” says Christoph Guttentag, Dean of Undergraduate Admissions at Duke University. “Students are trying things out and trying new interests. If you don’t know what you want to do, you shouldn’t be at a disadvantage. Even college is a time of exploration. Colleges, by definition, provide opportunities you can’t get in high school.”

Having an idea of what you want to study can help you choose a college, at least insofar as eliminating universities that specialize in certain subjects. But if you aren’t sure, picking a college based on a half-hearted idea won’t help you. If you are undecided, explore the colleges that offer a broad range of majors in an atmosphere where you would thrive.

“The idea that students have to have a major going into college is a misconception,” says John Boshoven, counselor for continuing education at the Community High School, Ann Arbor Public Schools, and a board member of Colleges That Change Lives. “They will change their minds several times.”

The College Choice Report, conducted by ACT, Inc., found half of the respondents indicated that the availability of their chosen major was the most significant reason for them to consider a college, but just over a third of them chose a major that wasn’t a good fit with their stated interests. According to the report, the interest-major “fit” clearly benefits both students and the colleges they attend: students engaged in good-fit majors are more likely to stay in college, stay in their major, and finish college sooner.

Majors in the college search

A small number of high school students can and should pick a college based on the major they know they want. If you are the kind of student who has devoted your time to playing an instrument you love and you cannot picture yourself doing anything but becoming first chair in a major symphony orchestra, then your college search can be narrowed down to music schools. Similarly, if you’re devoted to the problem-solving challenges of engineering, you need to look at schools with an engineering curriculum, because not all schools have them. Choosing a major can also be helpful in the scholarship search, as you may be eligible for awards specific to a field of study, available only to those who have declared it as a major.

“It depends on the serious and sustained interest you have,” says Jeremy S. Hyman, co-author with Lynn F. Jacobs of The Secrets of College Success: Over 800 Tips, Techniques, and Strategies Revealed. “And 17- and 18-year-olds change their interests. But if you really know what you want to do, it’s not a crazy idea to look at schools that will have that.” Most students, however, don’t fit that profile.

Parents and students often focus on post-graduation plans before even choosing a college, and they have reason to. Escalating education costs put pressure on families to get a good return on their investments. Laurence Shatkin, author of several books about choosing college majors, including The College Major Handbook, sums it up quickly: “College is important for getting a job these days.”

But how can students pick the right school for their career when they don’t even know what that career will be? What’s the best way to think about a major when you’re in high school and have no idea what you want to do?

Do what you love, love what you do

Thankfully, it’s not as overwhelming as it seems, according to Boshoven. He advises students to take an honest look at their school day and think of their favorite part, then investigate how that interest could become a career. Was it the afterschool yearbook club? That could translate into becoming a copy editor or graphic designer. Narrowing your focus allows you to dig deeper in the college search and concentrate on schools that offer those kinds of classes and programs.

This whittling-down process doesn’t mean you have to pick your college based on your possible major, but it’s good to have some ideas. “This might help students target the schools to consider,” says Katie Fretwell, Dean of Admission at Amherst College. “You have to start somewhere.” Taking an honest look at your interests can also help you “uncheck the boxes,” says Boshoven. Hate reading? A career in law won’t suit you. And if you faint at the sight of blood, it’s pretty safe to say that medical school might not be the right path.

While touring colleges, imagine how you will fit there and ask questions about the advising program. Is the academic program set up so that it’s easy to change majors? How does that compare to other schools you’re considering? What kind of guidance do students receive to help them decide?

Ellis-Moore says she knew no matter what classes she took, she would gain valuable skills just by exposing herself to new ideas. “It gives you the opportunity to open your mind in a different way or enforce wherever you are,” she says.

“I think there are lots of reasons why students should feel comfortable not knowing what they want to do,” Guttentag says. For one thing, it gives them the freedom to get outside of their comfort zones and challenge themselves. Other opportunities, such as creating your own major, studying abroad, internships, mentoring programs, and even unusual extracurricular activities all contribute new angles to shaping your life after graduation.

A little flexibility isn’t a negative thing. “A liberal arts education prepares you for postgraduate employment in important ways,” says David Shein, Associate Vice President and Dean of Studies at Bard College. “But your major is not the only relevant factor.”

Some colleges, especially those in the liberal arts, take a different approach to the major decision, allowing students to choose what they want to study. Amherst College doesn’t have a required core curriculum; instead, students pick classes that spark their interest. Many larger schools have specific classes that all first-year students take to get a broad overview. Other schools might have a portal, a degree path that offers focused, in-depth academic opportunities but leaves less room for change. “Find an institution that’s a good match for you and then dig a little deeper,” says Fretwell.

Take advantage of the curriculum once you are enrolled, advises Hyman. Talk to faculty in the department and look at graduation requirements (typically available on a college’s website) to find out what kinds of classes your major will entail. “Take one intro and one advanced class before you decide,” Hyman says. “You need to know whether you like the field and whether you can do [the work].” And if you hate the classes and/or find yourself constantly struggling in them, it might be prudent to consider other options.

Shatkin says no matter what a student’s passion is, taking classes in other areas only contributes to a well-rounded education, and it might also present other previously unexplored interests. You can also learn new skills through a student club or with a summer job. “Bring strengths to your main career that may come in handy later,” Shatkin advises.

Switching majors in college is so common that it’s expected among admission professionals. Once you are in college, you might find you are headed down the wrong path. “There are lots of people doing last-minute career changes based on one course that busted them,” Boshoven says.

And it’s certainly possible to change your major even after you have declared one—it just might be a little tricky. Depending on how many classes you have taken to meet your major’s requirements, you might end up taking five years (or longer) to earn your degree.

In fact, changing majors is one of the more common reasons that students take longer to finish college. If you switch majors or decide to double-major, you might need to earn additional credits . . . which might add an extra semester to two. According to a report by the U.S. Department of Education, less than half of first-time bachelor’s degree recipients in 2007–2008 got their degree in four years if they enrolled right after high school graduation. Twenty-three percent of that group took 49–60 months, and another 9% stretched their degree to 61–72 months. And each additional year means an additional year’s worth of tuition, which can become especially problematic if your ongoing scholarships only cover four years, as many do.

As you choose courses and deliberate your major choices, it’s important to keep these considerations in mind and work closely with your academic counselor to make sure you have a viable plan.

Your college years will give you many skills you can apply to a future career. Just as colleges look for well-rounded applicants, so do employers. Any major you choose, as long as it’s something you care about, will boost your critical-thinking and problem-solving skills.

Shein says students should consider the university’s fit and the opportunities a student could find on and off campus before they focus on declaring a major. “This is about the student, not the curriculum,” he says.

In the end, choosing a college based on a potential major, or even a major you’ve had your heart set on, isn’t foolproof. Make sure you study something you really enjoy, and if you change your mind, re-member that it’s not only okay—it’s common.