Many students think courses unrelated to their majors are completely pointless. Turns out, those gen ed requirements are a lot more important than you think.

When you decide on a major—whether it’s engineering, history, or creative writing—you likely envision yourself in the jobs aptly described by that major: an engineer, a historian, or a writer. So when engineering majors find themselves required to take a course on literature or creative writing majors need to take a science class, they may wonder what the point of those general education classes might be. Turns out, those gen ed requirements might be a lot more important than you think.

What exactly is general education? These programs, often referred to as “gen eds” or core curriculum classes, are a collection of credits required by all majors for a degree. No matter what your degree (BS, BFA, etc.) and how many credits are required for it, these classes are added on top of your mandatory major courses with the intent to broaden knowledge beyond what’s required in your field.

But with many students thinking courses unrelated to their majors are completely pointless, we’re left to ask, are general education requirements a waste of time?

Paul Hanstedt is an English professor at Roanoke College in Salem, Virginia, where he was also the general education director. He authored General Education Essentials: A Guide for College Faculty, and he also boasts the nickname and Twitter handle “Curricular Geek.”

Hanstedt says the biggest problem with gen eds is not the courses themselves but the fact that the importance of these courses often isn’t self-evident to students. Many may wonder why an English major needs to take math, but it turns out doing so is very relevant and valuable. “For instance, when I’m taking my gen ed course in literature, can I take the ideas of approaching literature and apply those problem-solving methodologies in a chemistry setting?” he says.

Students just need to realize how skills learned in one class can apply to an entirely different subject and, furthermore, situations that could be encountered during one’s career. (Besides, if you start your own freelance writing business with a dearth of skills in math, you may find balancing your budget especially taxing.) 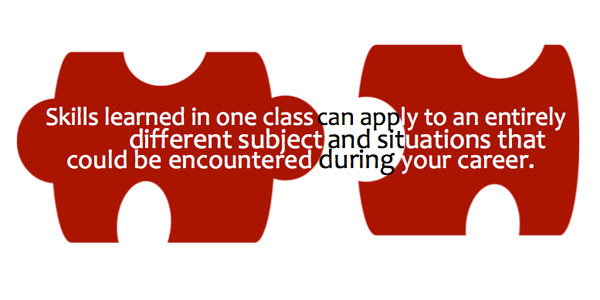 Moreover, recent studies show that many incoming college freshmen are actually not ready for the rigor of college class work, underprepared by their high school courses in core subjects like science and math. Though some freshmen may encounter material they once saw in a high school class, many are receiving a necessary foundation for the kind of critical thinking and knowledge base necessary to succeed in college and beyond.

Webster University’s Dr. Bruce Umbaugh, a philosophy professor at the St. Louis, Missouri, school, led the redesign of the University’s general education curriculum into what is now called the Global Citizenship Program.

Umbaugh emphasizes the fact that students concentrate so hard on what they’ll select as a major that they often overlook the importance of learning general skills like problem solving, communicating effectively, and analyzing information.

“It’s not just that they need to know a bunch of stuff and take a test; they need to be positioned to use that knowledge in the world,” he says. The program at Webster was created in a way that gives students repeated practice with their acquired skills in a more realistic setting. “They don’t just take a composition course, but they meet the writing requirement in the context of the subject matter that interests them, which is more authentic and better for building the skill.”

There are three kinds of general education curricula that Hanstedt discussed: The first is pure distribution, where students are required to take, for example, two natural science courses, two mathematics courses, two writing courses, etc. The second is a pure integrative model, which doesn’t focus so much on the content of the courses or distribution of fields of knowledge but instead on a student's ability to carry skills from one area to another. Lastly, there are those schools that combine both, which Hanstedt says is about 64% of US institutions.

“The trend is very clearly moving away from pure distribution to pure integration,” Hanstedt adds. “The benefit of [a pure integration] model is that it develops the flexibility of mind and...prepares students not for the world that’s there now, but for the world coming in five to 10 years, where none of us know what’s going to happen.”

This kind of knowledge is important, considering the competitive nature of the job market. There are jobs that didn’t exist previously, and these jobs have no set major—for example, someone with a career in social media doesn’t have a degree in social media but rather communications, marketing, or journalism. But what helps one excel in his or her field is not just the knowledge of the field itself, but the added skills developed.

In addition, “The jobs we go into aren’t nearly as simple as the majors we studied preparing for them,” Hanstedt says, while describing an architect. Only a fraction of what an architect does is architecture. The rest of the time, they are managing personnel, dealing with political issues in the community, looking for new business, and many other tasks.

Related: Find scholarships for your major

Otterbein University in Westerville, Ohio, has a general education program called Integrative Studies. The program is well known in the higher education industry: it has been used as a model at another institution and has received multiple grants over the years to redo the curriculum and include experiential education.

“We think it’s really beneficial for students to step outside their comfort zone...look at issues and problems from other perspectives, and to interact with students who see things differently,” says Wendy Sherman Heckler, Associate Vice President for Academic Affairs and Dean of University Programs at Otterbein.

Regarding students who think general education requirements are pointless, she says this option isn’t right for everyone. There are plenty of careers where a pointed program, like an associate degree, might be the perfect foundation for a skilled position. But a truly well-rounded education will help students think for themselves, “deal with unforeseen issues, think critically, and solve problems.” 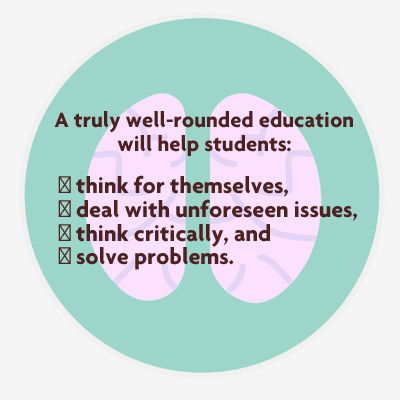 One often-overlooked benefit, regardless of the type of general education program, is the ability for students to do some discovering. For undecided students in particular, general education requirements enable them to explore the options available at a particular school, without the potential of getting off track and wasting credits—and in turn, wasting money.

For Otterbein graduates as well as those from other colleges, the benefits of a general education curriculum are not necessarily seen while in school but become evident once graduates enter the workforce. And what stands out about curricula like Otterbein’s is the fact that it’s purposeful: the creators have specific outcomes in mind regarding what the students are learning and how they can take those skills into the world.

“Sometimes, students are upset about gen eds because they feel it’s not career preparation, but we’d say it’s just the opposite, especially in an age when students will change careers multiple times,” Sherman Heckler adds.

Related: The Truth About College Majors

Hanstedt references a study done by the Association of American Colleges and Universities (AACU) in which 91% of employers said they are asking employees to take on more responsibilities and to use a broader set of skills than in the past. In other words, job seekers need to know a lot more than just the basic skills required to work within their fields. Additionally, 88% of employers said that to succeed in their companies, employees need higher levels of learning and knowledge than they did in the past.

“Inevitably, students walk into a job where they’re encountering content that hasn’t been delivered to them before,” he says.

In the end, general education requirements are all about preparing students for the unknown. A student’s interests can change, careers may advance, and new jobs may be created—all situations where a foundational skillset and broad-based knowledge are necessary for success. The purpose of these programs is to give students abilities that can’t be found in a textbook; they are the product of communication, analysis, problem solving, and experience.

Umbaugh emphasized what a general education curriculum enables students to do: gain broad knowledge, learn intellectual and practical skills, understand cultural differences, evaluate ethical consequences, and make connections across academic disciplines. “We try to prepare [students] for all of the jobs they might find rewarding and that they might use to make a difference in the world."