Life in the Liberal Arts 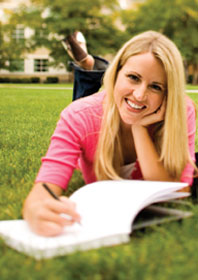 Here’s a pop quiz for you: What do the following people all have in common? John F. Kennedy and Bill Clinton, former Presidents of the United States; Sally Ride, first American female astronaut; Michael Eisner, former CEO of the Walt Disney Company; and Martha Stewart, media mogul and lifestyle celebrity. They were all liberal arts majors! They studied a little bit of everything at university in foundational areas like mathematics, science, English, history, and the arts. The skills they learned as liberal arts majors translated into their eventual careers, which, as you can see, are wildly varied.

As you browse through lists of college majors, keep in mind that it’s okay to be undecided, to want to explore your options, and to study different disciplines. Research says that the average adult (in the United States) will change jobs seven times in their lifetime. That doesn’t necessarily mean moving from one company to another—we’re talking about going from one career path to a completely different one! Taking an interdisciplinary approach to your education by exploring different subjects within the liberal arts will help give you a well-rounded education to prepare for future career changes.

When exploring and researching colleges and universities, take note of your deadline to declare a major. Some schools require you to declare a major upon enrollment, while others ask that you decide within the first two years. If you’re not 100% certain of what you want to do, find out how flexible the school is regarding changing your major once it’s declared. Some schools even let you design your own area of study, with faculty guidance and university approval.

Liberal arts schools encourage experimenting with different majors, and most require a core curriculum of classes in multiple disciplines. Typically, one-third to one-half of students’ classes will be in their major (if they’ve chosen one), and they will balance that course work with electives that fulfill the university’s core requirements. It’s important to major in a subject you enjoy—not just something you think you should be studying or something you’ve been told you should study. You want to pursue a major that makes you want to attend classes! As you take classes in different fields of study, you’ll discover where your true passions lie. It is very common for students in liberal arts schools to change majors, even after they are declared. Often, those students still graduate within four years, because most classes, no matter the discipline, will count towards the core requirement for graduation.

Deciding on a major at a liberal arts college can be a daunting task. Today, U.S. universities offer more majors to choose from than ever before. For the undecided student, that’s a lot to consider! Ask yourself the following questions:

Though the liberal arts may not seem like a “career-focused” area of study, employers seek candidates with very strong written and verbal communication skills. Liberal arts majors tend to have more interpersonal skills, are better able to understand how things interrelate, and quickly learn new things on the job. A liberal arts education is about approaching problems from a different point of view. A liberal arts school will ensure a multifaceted skill set. The liberal arts student will be a better multitasker and well-rounded individual.

An internship is another great way to explore career paths, providing real-world knowledge of what life may be like after graduation. This can show you the pros and cons that may accompany your major. Internships are an eye-opening experience—it may help you figure out what you do or don’t want to do for the rest of your life!

Meet with your academic advisor to review the majors you’re considering. Together, you can create a four-year plan based around a major (or majors) of interest and perhaps even add a minor or concentration that complements or contrasts with it. In the liberal arts, students can really design their own education.

A liberal arts education opens a wealth of possibilities through interdisciplinary study and major exploration. Speaking with an academic advisor can help students navigate the areas of the liberal arts until they find their passion.