Student-Faculty Research in the Social Sciences 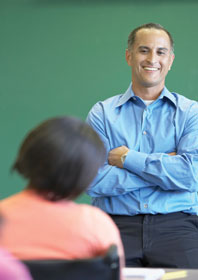 Participation in research enriches students' learning experiences, provides improved preparation for graduate school or work, and creates involved citizens who address community problems. The opportunities are countless, and students who seek out such experiences will be rewarded with both engaging work and increased career options.

In April 2010, the Council on Undergraduate Research (CUR) hosted its annual Posters on the Hill, a presentation of some of the best student research from across the country. The 58 students who presented were selected from over 400 applicants. Some of the issues students studied were:

* Pakistan: the nuclear implications of an Islamist takeover

* A league of their own: gender composition of educational environments and success

* Post-conflict peace-building and reconciliation: the roles of gender and religion in post-genocidal Rwanda

Research projects like these illustrate the vital role undergraduates play in university research. Students have found that their educational experience is enriched when they have the opportunity to engage in this process of innovation and discovery.

Campuses often help students develop research skills by involving them in inquiry-based activities and projects or through a research-rich curriculum. Others may engage first-year students in research activities under the supervision of a faculty member in the labs. Some campuses even offer a summer research experience prior to beginning the first year of college.

As you become more engaged in your major and experienced with the work, you may want to collaborate with a faculty mentor on his or her individual research. In the sciences, professors often involve students in some aspect of their ongoing research. A student may take a small piece of a much larger research project and work on it independently or alongside the faculty mentor.

Professors who are engaged in their own research often have funding from a federal agency such as the National Science Foundation, the National Endowment for the Humanities, the National Institutes of Health, or even private foundations. In some cases, the funding may also provide stipends for students to assist in the research during the academic year and/or over the summer. There are also opportunities for students to participate in research at a campus other than their own through the National Science Foundation’s Research Experiences for Undergraduates (www.nsf.gov/crssprgm/reu). These summer programs usually pay for the students’ room and board, travel expenses, and a small stipend. You can find out about more opportunities by going to www.webguru.neu.edu.

Most campuses that offer undergraduate research opportunities also provide chances for students to share the results of their hard work at research events or symposia. Students frequently publish articles with their professors in scholarly journals. They also might be invited to make presentations at professional meetings or at undergraduate research conferences.

ChemistryCynthia Dretel, a senior at Moravian College in Bethlehem, Pennsylvania, discovered szopki, Polish musical puppet plays written in Holocaust concentration camps. The manuscripts were filed away in the United States Holocaust Memorial Museum in Washington, D.C., and little or no scholarly work had been done on them. Cynthia learned Polish in order to translate and analyze the puppet plays to show their historical importance and how the symbols were code for life in the concentration camps. “Cynthia’s project was unlike any other honors projects I have directed. She literally brought to life a musical manuscript,” says Cynthia’s advisor, Larry Lipkis. “She transcribed the music, created a modern edition that can be performed by choirs, and researched the background of the szopki tradition. It was a prodigious task—practically two honors projects in one—and necessitated an inordinate amount of hard work. Cynthia met the challenges she put to herself and in the process grew enormously as a scholar and editor. She has now set herself on a path for many years of advanced study in Polish Holocaust research.”

When Cynthia’s szopki performance from the Dachau concentration camp is eventually published, she will have created a singular and significant addition to Holocaust studies. Choirs in Polish Catholic congregations whose members may have lost relatives in Dachau and other camps will have a poignant musical connection to their past.

Blair Williams, a recent graduate of Hope College in Holland, Michigan, carried out his own self-proposed engineering research project with the support of Dr. Miguel Abrahantes in the engineering department. The project developed an automatic roll angle control system for a computer-driven bicycle, based on his undergraduate work in the mathematics department. The results were published last year in the journal PRIMUS: Problems, Resources, and Issues in Mathematics Undergraduate Studies. Blair received funding from the National Science Foundation and the Howard Hughes Medical Institute, and a scholarship from the Barry M. Goldwater Foundation. “My mathematics and engineering research experiences at Hope have been phenomenal,” he says. “Not only have they helped to lay the groundwork for my research studies in graduate school, but they have given me the opportunity to work closely with Hope faculty mentors on involved, rigorous research projects.” He graduated in May 2010 with a B.S. in mechanical engineering and will continue his studies at Stanford University in Palo Alto, California, through an NSF Graduate Research Fellowship.

Participation in hands-on research can transform students by deepening their learning, developing their self-confidence and a sense of accomplishment, and clarifying their interests. It can encourage students to pursue a Ph.D., hone oral and written communications skills, and incite a passion for science in ways that traditional classroom learning cannot. Beyond that, research can transform entire departments, campuses, communities—or even a scientific field as a whole.

• Professor Warren Montag and two student researchers in the English Department at Occidental College in Los Angeles are investigating the theological and political concept of “the stranger” and the ways in which this ancient notion continues to structure debates about the immigrant in Europe and North America. To what extent has it come to coincide with the equally ancient notion of “the enemy,” and what are the ethical implications of this coincidence?

• Jeffrey D. Weidenhamer and his students at Ashland University in Ohio studied lead levels in consumer products following the death of a four-year-old Minnesota boy who swallowed a bracelet charm containing lead. The experiment measured the lead content of children’s jewelry from local dollar stores and was conducted in a course for non-science majors on lead’s chemistry and toxicity. This became an ongoing research effort that has resulted in six publications (two co-authored by undergraduates) and a dozen national recalls of products with high lead content. The research has even been cited in a congressional resolution on U.S. e-waste export policy.

• Dr. Sue E. Hoppe and her students studying special education at Cameron University in Lawton, Oklahoma, participate each fall and spring semester in action research. They have developed a simulated classroom where students learn to teach children with autism using applied behavioral analysis strategies. They have presented research at local and national conventions as well as submitted articles for publication.

Participation in research enriches students’ learning experiences, provides improved preparation for graduate school or work, and creates involved citizens who address community problems. The opportunities are countless, and students who seek out such experiences will be rewarded with both engaging work and increased career options.

Diane Husic, Ph.D., is chair of the Department of Biological Sciences at Moravian College and President of the Council on Undergraduate Research. Kelly McConnaughay, Ph.D., is Associate Dean of Liberal Arts and Sciences at Bradley University and editor of CUR Quarterly.