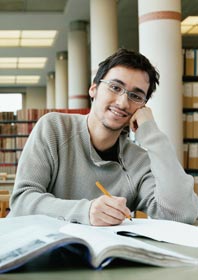 What does it take to be successful and happy in college (and long after)? Author, education expert, and President Emeritus at Harvard Derek Bok has some important insights on the matter.

Several million students are or will soon be entering college. If you are among them, you will have received much advice from parents and friends, and you will soon hear more from college officials. But you might also want to know what researchers have discovered about some important choices you will make that could have much to do with what you gain from your next four years.

Freshman surveys reveal why most students go to college. In 2012, as in prior years, 88% sought a “better chance for a good job,” and 81% wanted to be “very well off financially.” Curiously, however, most students today are not acting in ways that will help them reach these goals.

One careful study has discovered that the time undergraduates spend studying for class has dropped from approximately 25 hours per week in the early 1960s to below 15 hours today. Studying less is almost certainly a mistake. Research shows that students who study more tend to make greater progress mastering skills such as critical thinking, writing, and problem solving that are important for almost any vocation. Another survey has recently found that students in the 20% who improved these skills the most were three times less likely to be unemployed two years after graduation than the 20% who improved the least. Incidentally, undergraduates making exceptional progress could be found in every kind of college, from the humblest to the most prestigious.

Studying also has a greater effect on college grades than anything else you do, and grades tend to affect your chances of becoming “very well off financially.” One study of 20,000 alumni 15 years after their graduation from a group of well-known colleges found that those who finished in the top third of the class earned substantially more on average than those in the middle third, who in turn earned significantly more than classmates in the bottom third. Not surprisingly, more than 40% of these alumni (and over two-thirds of those in the bottom third), wished they had studied more in college.

The way you study can also affect success in college. Large majorities of students today admit to texting and reading e-mail during class. Those who do, however, tend to remember less, understand less, and receive lower grades than those who give instructors their undivided attention. The same is true of homework. Even listening to music while studying detracts significantly from retention and learning.

Whether students should study alone or with others is more complicated. In classes that assign problems as homework, group study is often helpful if students first try to solve the problems by themselves. But simply getting together with classmates to talk about assignments without first studying alone seems to inhibit learning rather than increase it.

In choosing courses, many students prefer classes with modest homework demands and easy grading. Yet taking harder courses with longer readings and more papers to write helps to increase learning. Classes on unfamiliar subjects can also expand the mind more than courses similar to ones you have already taken.

At this point, you may worry that success in college requires unremitting study. Not so. There will still be plenty of time for socializing and extracurricular fun. Once again, however, researchers find that not all outside activities are equally valuable. In general, active pursuits, such as participating in student organizations, talking with classmates, and community service, tend to be more fruitful, while devoting a lot of time to passive activities, such as watching TV or playing with the computer, seems to be linked with less conscientious study habits. Interestingly, paid jobs on campus are associated with higher grades, while off-campus jobs have the opposite effect.

Last but not least, college is a wonderful place to explore new interests, broaden your experience, and reexamine your goals. In doing so, you might think again about whether “being very well off financially” should be your chief reason for attending college. As it happens, there is research on that question too. According to several investigators, including a Nobel Prize­–winning psychologist, those most preoccupied with making a lot of money tend to be less satisfied with their lives, perhaps because they are more likely to neglect things that turn out to matter more, such as family, friends, and work they find truly absorbing and fulfilling.

Of course, the findings I have described are only tendencies and probabilities. Conceivably, you could be an exception. But don’t count on it.