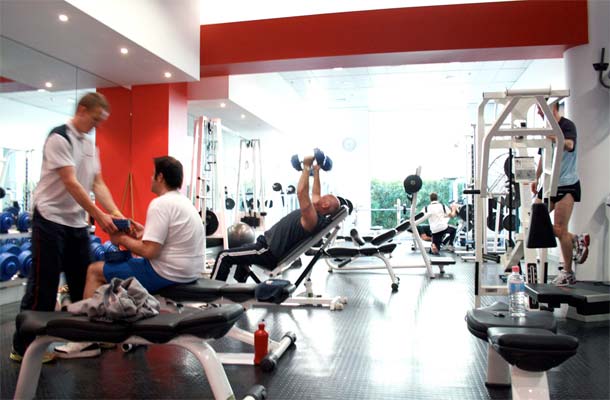 We’ve all been there, waiting patiently (or not so patiently) in the campus gym for the barbells or treadmill or pull-up machine to become available. So what do you do when the gym is crawling with your classmates and you can’t workout?

Margaret Moore glares at the backs of people on the treadmills. She has waited at least a half hour for someone to get off, but no luck. She taps on her water bottle, waiting, before finally giving up and deciding to go home and try again the next day. Though she has a plan for the gym every time she goes, she is a student at Indiana University and uses the popular campus gym, so she sometimes finds that whatever machines she intended to use are occupied.

At the University of Michigan, the beginning and end of the semester tend to see a significant increase in attendance. But before spring break, it’s a mad house, with gym usage doubling. There is often a wait for machines. “I remember one girl came in the day before spring break and tried to use a treadmill but they were all booked,” says Grant Hackton, a former college trainer. “She actually ended up waiting there for an hour before leaving.”

For students using college gyms, there are peak hours in the morning and in the evening when most people go to work out, so it can get crowded and hard to find a machine.

According to the International Health, Racquet & Sportsclub Association, 60% of gym goers are using weight machines or cardio equipment, so it’s important to go to the gym with a Plan B in mind so that you can get the type of workout you want even if the machine you planned to use is taken.

Stephanie Saravolatz, a student at U of M, waited so long in the gym one time that it closed while she was there. She sat waiting for a half hour for a treadmill to open up and ended up having to leave without ever exercising. “It was annoying and it was also embarrassing,” Saravolatz says. “I came wanting to run and got kicked out.”

College students have busy schedules and often times are all going to the gym during the same hours—morning or evening.  “I only ever have time to work out at night,” Saravolatz says. “I always want to get some cardio, in but I don’t feel comfortable running around campus at night, so I have to go the gym.”

Rather than going to the treadmill, Hackton believes that a swim workout is a good Plan B and may even lead to a better workout. “Swimming definitely has a big cardio element to it, but it also gives more of a full body workout than the treadmill does,” he says.

Hackton’s rule of thumb is that a 30-minute swim workout equals 45 minutes on the treadmill, due to the extra effort required. As for a specific stroke, he says that freestyle tends to be the most popular and the easiest.

Karen Sullivan, a certified personal trainer, says that though swimming is useful, it isn’t necessarily for everyone. “Regarding the difference between the treadmill and swimming, the deciding factor is in how well you can swim so that you can challenge yourself,” Sullivan says.

For those who aren’t comfortable swimming, jumping rope, running up stairs, or biking are good “Plan C” options.

Bailey Walker, a student at Wayne State University, usually prefers using weight machines to cardio, but hates it when he can’t find the type of weight he wants. “I’m not going to hurt myself by using a weight that’s too heavy for me,” Walker says. “But I’m also not going to waste my time by using weights that are too light either.”

For muscle-building workouts, body weight exercises are the best option. These types of exercises entail using your own weight to build muscle, through such exercises as planks, pushups, wall sits, handstands, etc. “Making sure that you do a workout that highlights every major part of the body is smart so you don’t over-extend anything,” Hackton says.

If you aren’t comfortable making your own body weight routines, gyms often have strength classes you may be able to drop in on. “There are obviously the big classes like yoga or Zumba, but most of the time the body weight classes and other similar classes don’t fill up as fast, so you can drop in and get a spot if you’re there when class starts,” Hackton says.

If you don’t want to do body weight exercises to build muscle, trying to find a rowing machine is another good option. “Rowing machines are crazy,” Hackton says. “They do so much for your body in a relatively short amount of time. They’re good for arms but also legs and back too.”

Moore, Saravolatz, and Walker have all played and enjoyed team sports. However, though Moore has managed to keep up with volleyball in college, Saravolatz and Walker say they don’t have anyone to play with.

“I heard that a lot of the college students I worked with wanted to play team sports but didn’t feel like they had options,” Hackton says. Some students who wish they could participate in team sports don’t feel comfortable playing intermurals or don’t have the time to commit to a team.

Playing racquetball itself is similar to tennis or badminton, though it doesn’t require a partner. You can use a racquetball court and hit a ball against the wall. It gives you a workout and a sports activity, but you can do it alone.

Whether you’re into cardio, strength training, or team sports, there is always a chance that what you’re planning to do at the gym won’t be an option, so it’s always good to pack gear that allow you to do your Plan B, or even C, once you get there, especially if you go the gym during peak hours. Having a Plan B worked out for Moore, who now brings a swimsuit with her whenever she’s planning on doing a cardio workout. “I finally won’t be wasting time waiting at the gym anymore,” Moore says. “I realized that I actually like swimming even better than I like the treadmill.”