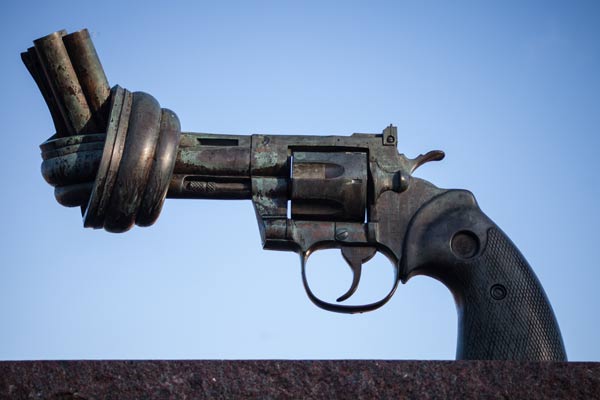 Locked and Loaded: Guns on Campus and How College Life Is Changing

More and more states are putting the Campus Carry law into effect, allowing concealed weapons on public college campuses. Here's what students, parents, professors, and others think about the controversial bill.

by Saidee Holmes and CollegeXpress

“Non-Violence” aka “The Knotted Gun”; sculpture by Carl Fredrik Reuterswärd; photo via Flickr

Seventy-six shootings occurred on college and university campuses between 2013 and 2015, according to Everytown Research. In 2015 alone, 30 people were killed and 52 were injured from gunfire on campus. These shootings are clearly devastating to students, their families, and faculty, but they also have long-term effects on the schools as a whole. At colleges where shootings take place, enrollment rates and student performance drop dramatically and continue to drop years after the occurrence. So how do we handle this far-reaching problem? Some lawmakers think we should more-heavily enforce current firearm regulations, while some think the exact opposite.

The National Conference of State Legislatures says that upward of 15 states have introduced bills that would allow concealed handguns on college campuses; however, only a few have passed. In Kansas and Texas, colleges and universities are prohibited from banning firearms on campus; in Arkansas and Tennessee, faculty and students are permitted to carry; and in Ohio, there is no ban on firearms on campus and the individual institution is given the choice to allow them or not. In Arkansas, where 220,000 residents have concealed carry permits, “Campus Carry” would allow guns on college and university campuses, in some bars, and in government buildings. The law will take effect on September 15, 2017, according to USA Today.

Parents of young adults in colleges across the nation are taking notice of these bills. Some are comforted, some are outright terrified, and others are undecided on the subject. “It does not make me feel so safe that any student of any age [will be] allowed to carry as long as they have a permit,” says Melinda Branum, mother of a sophomore at Henderson State University in Arkansas. “I do not think that college kids, alcohol, and guns mix very well, even if they are trained to carry.”

Branum does think this is a step in the right direction to decreasing gun violence on campuses across the country; however, she believes more stipulations should be added. For example, neither students nor faculty are currently required to report having a concealed carry license or whether they plan to carry a weapon on campus. If someone besides a police officer asks them if they have a permit or a weapon, they are not required to answer. This is worrisome to some parents who believe it is a school’s responsibility to be aware of how many handguns are being carried on their campus.

“Campus Carry” was introduced in the aftermath of the Virginia Tech Massacre. The bill is a little different in every state, with Texas recently becoming the eighth state to put the law into effect, according to AJ Plus. Under that law, people 21 years and older are now allowed to carry concealed weapons on public college campuses. This includes the University of Texas at Austin, the location of the first mass shooting on a college campus in 1966, where 16 were killed and 13 were injured.

AJ Plus reports that students and faculty are largely divided about Campus Carry at UT Austin. One student, Ana Lopez, started a campus-wide organization known as “Students Against Campus Carry,” and several professors have attempted to sue the state to stop the bill from passing. They claim that loaded guns in the classroom would inhibit classroom discussion and infringe on students’ first amendment right to free speech, but a federal judge denied their request to stop the law from going into effect.

One professor, Mia Carter, told AJ Plus she is particularly concerned for students of color; UT Austin’s student body is approximately 4% African American and 22% Hispanic or Latino. She is less concerned with mass shootings but does worry about “jumpy” students reaching for their guns too quickly in tense situations or students becoming angry and lashing out in class debate or arguments with fellow students.

At the University of Kansas, professor Jacob Dorman recently resigned from his tenured position to teach at a school in another state without Campus Carry; the state of Kansas’s law will go into effect this July. Prefacing his resignation letter published in The Lawrence Journal-World, Dorman said the Campus Carry policy “will do irreparable harm to higher education in Kansas and the well-being of Kansans” and “weakens its institutions of higher learning by driving off faculty members or applicants who feel as I do that there is no place for firearms in classrooms.”

Those for Campus Carry say they are looking at more than mass shootings. RAINN reports that 11.2% of students will be raped or sexually assaulted before they graduate, and 12% of all hate crimes are committed on college campuses. Students and faculty are concerned about their safety, and they claim Campus Carry gives them an opportunity to defend themselves against danger on campus. Tasers, they argue, are not sufficient self-defense options because a victim would need to be in very close range to the perpetrator, and they are not always effective. Mace or pepper spray, which is still prohibited at several campuses, has also been said to be less effective in dangerous and high-stress situations.

NRA Spokesperson Catherine Mortenson told Campus Reform, "Threats to personal safety don't disappear once you step on campus,” and "Denying law-abiding gun owners their God-given right to self-protection on campus leaves them vulnerable to attack.” But in an op-ed in The New York Times, the editorial board called this a “bizarre premise.” In addition, a study on college gun violence by the Citizens Crime Commission of New York City reports that more guns on campus equals more college shootings: there was a 153% increase in shooting incidents (101 from 2011–2016, compared to 40 between 2001–2006), and “Unsurprisingly, the increase was most profound on colleges in states with increased access to guns.”

Whether you are for or against Campus Carry, one thing should be in the forefront of everyone’s minds: student and faculty safety. While this bill has been controversial and widely debated, it has sparked a conversation about the safety of public institutions. Safety is bipartisan, and we should all be working together toward a safer future.

Are you for or against Campus Carry? Share your stance in the comments.