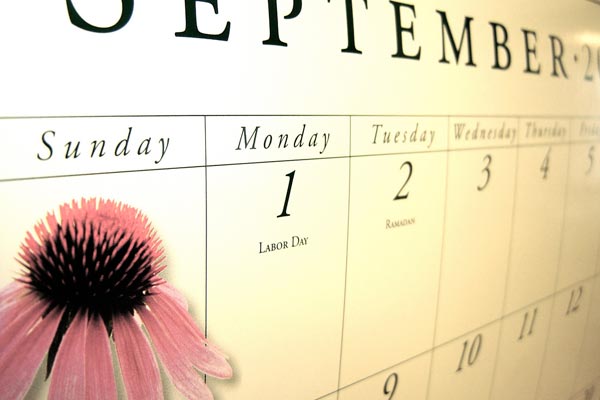 The First Day of College

Going off to college is both exciting and bittersweet. It can also be nerve-racking. Here, a college student who's been in your shoes shares her first-day experience.

I had been lying awake for hours, staring at the white ceiling in my cousin’s childhood bedroom. The room was painted blue and orange; living so close to the University turned everyone in the nearby working-class town into an alumnus whether they attended the college or not. As my eyes were surely boring a hole into the ceiling, I attempted to decide whether I was about to vomit or cry. Today was the day. Starting a brand-new life with brand-new people, and I wanted no part in it.

This wave of stubbornness had only washed over me in the past week. I had quickly realized that my friends and family were not coming with me, and I was pissed.

What do you mean my dad isn’t going to be there to make me breakfast every day?

I’m going to be 5,000 miles away from my best friend since birth?

Thanks but no thanks.

Before this week I was ready and raring to go! I imagined myself walking onto campus and commanding everyone’s attention. I would be the star pupil. I would go out every weekend and people would see me and think, I want to be friends with that ball of confidence. I would solely listen to obscure indie music and read feminist manifestos. People would find me interesting, dammit!

But here I was being anything but interesting, terrified to get out of bed and start this potential adventure. Eventually I did get up, mainly because I realized I couldn’t hide forever, partially because I had to go to the bathroom. What was my alternative option? Going to my local community college and living at home? All of my friends had gone away to school, so it wouldn’t have been the home I knew and I would have been severely jealous of all the fun my more courageous friends were having.

My parents and I thanked my aunt for her hospitality and joked that her living so close to my new home could prove dangerous. Maybe she’d join me at my first frat party. Haha. Our car was packed and it was time to leave. I moved as slowly to the car as I could. This had suddenly become very real. I thought to myself, Who do I think I am? I’m not ready for this. My parents seemed excited. I told myself it was just a façade to mask their anguish of their middle daughter leaving. Realistically they were probably actually excited for me to start my secondary education and have adventures I would be talking about for the rest of my life, because they’re good people.

As we approached the campus my stomach lurched. I was furious with my older friends for not warning me that this would be so terrifying.  We hauled all of my things up to my third-floor dorm room. All of the bags and boxes near the dresser seemed to be a physical manifestation of my 18 years. That was terrifying to me; how could my life be summed up into clothes and backpacks and socks and just shipped to the middle of nowhere, central New York? My room was bare, even stripped of a roommate. She was moving in late. She was supposed to be my built-in friend, someone I could go to orientation events and eat in the dining hall with, so I could avoid the misconception that I was a weirdo with no friends. Naturally I went into panic mode the second my parents and I said our goodbyes.

Who am I sitting with at dinner tonight?

When am I going to meet my “group”?

Did I pack enough popcorn?

And while I was sure I packed enough popcorn, the other questions rang in my ears like I had just been hit over the head with a cartoon anvil. All I wanted to do was call my parents and tell them to turn around, that this was too scary for me and I would be just fine working at my local mall and living at home forever. But I didn’t want to be the chicken that couldn’t hack it for one day. So I looked myself in the mirror, and as corny as it sounds, I told myself out loud, “People like you. You are fun, smart, and friendly. Go get ‘em, champ.” I literally said the phrase, “Go get ‘em, champ” to myself. Looking back on it, maybe I’m thankful my roommate wasn’t in the room for that shining moment.

Confidence as high as it could be for someone in my position, I walked right next door and knocked on the open door and said proudly,

A skinny boy with almost translucent skin and pale hair looked up and said, “Okay.”

Okay? Okay? Who did this kid think he was? I psyched myself up for an “okay”? I attempted to let it roll off my shoulders.

“Well, I’m just going around introducing myself. I’ll see you around!” I said, hoping my bruised ego was not peeking through.

Well, at least I got a name out of him. So maybe we won’t be best friends, I thought.

That’s how the rest of my day unfolded. I went around my floor for an hour and said hi to anyone whose door was open. I figured nothing could go as awkwardly as that first encounter, so what did I have to lose?

And the answer was nothing. I quickly realized that no one starts off college with a prearranged friend group. Everyone is just as scared as you are, and most of them are too nervous to break the ice and are praying someone else will do it for them. Anytime someone new came up to me and talked to me out of the blue I was so thrilled by it. So I had to assume that that’s how other people felt when I went up to them. The first few weeks were scary. Horrifying even.

Would I go to parties?

Who would I sit with in class?

Are the people I’m hanging out with the friends I want for the rest of college?

And even though it felt like I was the only one feeling like a nerd for not knowing how to do anything, everyone was in the same boat as me. Some people are a little better at hiding it, but everyone was feeling a little lost and scared. There’s no reason to be ashamed of that nervous feeling, because starting what is most likely the biggest change and transition of our young lives is scary. However we should hold on to that piece of excitement throughout our years, because that is what makes it an adventure.

What were/are your biggest fears about going to college? (We know you have some—we certainly did!) Let us know in the comments or on Twitter.

Meghan Stark is a rising sophomore at Syracuse University pursuing an English major. She loves cereal, Tess of the D'urbervilles, and tweeting everything she thinks.

CollegeXpress helped me find the school I am currently attending by consistently sending me emails of other schools. This allowed me to do research on other schools as well as the one I am in now!

I want to sincerely thank you all for this amazing website that's legitimately helped me find so many different scholarship opportunities. I've been stressing out for the longest time about paying for college since I would rather stay out of debt and have been working days trying to find any scholarship opportunity. When I found CollegeXpress, I discovered many easy scholarships that have given me hope for the future. Thank you and God bless!

I've used CollegeXpress quite a bit as a senior, particularly for colleges and scholarships, so it's been a very big asset in that respect! I would recommend it to anyone looking to pursue a college education, especially seniors! This scholarship will help me achieve my goals in ways I couldn't have before, and I know that there are opportunities like that for everyone on the website and in the magazines!