Bitopia author Ari Magnusson discusses his encounter with bullying in high school, and how he overcame it. 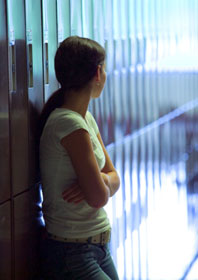 To say I didn’t fit the mold would be an understatement. I was an extrovert, a class clown, had lots of friends, a sharp tongue, and a sharper wit. And nothing about me was different, out of the ordinary, or could reasonably trigger a prejudicial response: a blandish Scandinavian/Italian blend, heterosexual, average build, with completely unremarkable features save for a big cowlick towering over my forehead. Through my elementary and middle school years, I was, if not a bully myself, someone who dominated some peer circles and solidly held my own in the rest. Nothing in my permanent record could have foretold that in moving from grade school to high, I would soon be a bullying victim.

My aggressor (I’ll call him Dirk) was perhaps a bit more textbook. He was big and strong, had few friends, and was always challenging others to fight after school. And winning. He was someone I instinctively realized early in my freshman year that I should avoid. Like any dangerous character, Dirk was fascinating to observe but to whom you wanted to appear invisible when his gaze swung in your direction. When or why he started bullying me, I don’t quite remember clearly. However, I do have a memory of sitting in a classroom, talking to the girls around me with him sitting nearby and him suddenly interjecting a comment into the conversation in an attempt at entry. The girls wrinkled their noses, and I, presented with the unspoken choice of continuing to bask in their flattering attention or casting my lot with the big, mean guy in the corner, let the social door slam shut in his face. Whether or not that slight of mine was the beginning of it all or simply a belief that stemmed from the standard victim response of thinking that the bullying was my own fault, it certainly would have been a logical starting point, payback for my arrogance and exclusiveness.

And how was I bullied by this ogre of a boy who had at least forty pounds on me, with brick-like fists scarred from use, and a long row of confirmed knock-downs stamped on the fuselage of his reputation? Quite easily: he instilled extreme fear. That’s right, this hard-swinging veteran of schoolyard scrapping never actually hurt me, not even once. Yet for most of freshman year I lived in constant dread and anxiety. I clearly remember his promise to me in the first few days after the turn in our relationship, when I had become a very bright dot on his radar, that he was going to knock my teeth into the back of my throat. And since the threat was coming from someone who routinely did just that to anyone foolish enough to accept his challenge, I had no reason to believe it wouldn’t happen. I remember the feeling of fear building when the bell rang and I had my next class with him, or when I did walk outside, around the school, at the thought of him suddenly appearing from around a corner to deliver on his threat.

Like the majority of students who are bullied, I of course didn’t tell my parents, any teachers, or even my friends. In my mind at the time, that would have been ridiculous, not to mention counterproductive. I absolutely had to figure this out on my own. I was a fourteen-year-old boy and, as I saw it, was big enough to handle it. Admitting to being bullied would have been an admission of weakness, I thought. And the last thing I wanted to do was to confirm to the aggressor the effectiveness of his bullying. Instilling fear was not against the school’s code of conduct, and so engagement of the school disciplinary system would have given him and me both a very clear understanding that the school was powerless to help. And now I see more truth in the powerlessness of others than anything; in my case, only I had the power to stop the bullying.

My salvation came out of the gray, literally, in the form of an unexpected snowstorm that put me, Dirk, and other classmates in an unmonitored study hall due to a lack of teaching staff. He immediately started turning the screws, knowing that he not only had his prey cornered, but with the lack of an adult presence that would require him to resort to his standard subtleties to escape notice, he could humiliate me in front of all my peers. As he started his work on me, however, a nearby classmate told him to stop. Dirk, surprised and angered by this challenge, turned to confront our classmate and rose to his feet. To my surprise, the classmate stood up as well. A heated exchange followed, and Dirk suggested they take it outside. But the classmate, instead of backing down, told him to lead the way. To my shock, Dirk, after a moment’s pause, declined and slowly sat down. The classmate sat and returned to reading his book as though nothing had happened.

For a moment, I was stunned. And then, replaying what I just witnessed in my head, I understood what had occurred. The classmate had shown no fear and stood his ground. Dirk wasn’t interested in a fight; he just wanted to demonstrate dominance. And that’s when I had the epiphany: Dirk never intended to hurt me. If he had wanted to, it would have already happened. Instead, it was my fear of him that allowed him to bully me, and my display of that fear gave him the satisfaction he sought and kept him coming back for more. So I started pretending that I wasn’t afraid (I still was) and stopped cowering (not easy at first), and not only did the bullying stop, but we even became friends.

In the current dialogue on bullying, it is anathema to say that victims have any level of responsibility for what happens to them. But I will be the first to stand up and admit without question that what made me a victim was the way I responded to Dirk’s behavior, the proof being how, when I changed my behavior, the bullying quickly stopped. And Dirk was not some vandalizing, pot-smoking poster child for the Three Strikes Law but rather a fourteen-year-old like me who wanted to leave the peer group fringe that all of us feared and move toward the center but who simply didn’t have the right social skills to get there. In the context of who we were at that time, the intersection of his aggression and my vulnerability to that behavior made his bullying of me inevitable and unavoidable.

We’re both adults now, scraping our way through life. Although we’ve lost touch—we haven’t spoken since graduation—I looked him up not long ago, as I was curious as to what happened to him. Did he, like some of the mainstream bullying literature today suggests, wind up on drugs, in jail, or worse? Quite to the extreme contrary: he runs a patio deck accessory business (not actually, but close enough), and a successful one at that. And his success suggests to me that he has developed his social skills and lost the insecurities that fueled his campaign of terror over me and, I learned later, many other peers.

I consider myself one of the lucky ones; I was not scarred from my experience as a bullying victim but rather, it made me stronger, smarter, and more resilient. I sometimes do wonder if things would have been different—if I would be a different person today—if not for that freak late-spring snowstorm. That long stretch of fear, anxiety, and dread didn’t have to go on for as long as it did, but nothing in my education up to that point had taught me how to understand and deal with the bullying that I faced. But I’m thankful for learning what I did that day, a lesson that I’ve already passed on to my two sons; I consider myself immune to bullying and will ensure that they are as well. And it’s not just my own boys I want to help; so important and life-changing was the lesson I learned that I’ve incorporated it into a novel, Bitopia, for middle grade and young adult readers, and used it as the basis for an anti-bullying guide for schools in the hopes of reaching young people everywhere. No one should endure what I went through for lack of knowing the solution. And if I do one day reconnect with Dirk, I just may thank him for his role in what was a very difficult, but invaluable life experience.

Ari Magnusson was born in New York but grew up on a farm in rural central Pennsylvania and spent his summers in a cabin on a river in upstate New York, settings that influence his writing, including many of the scenes in the land of his novel, Bitopia.

Ari attended Dickinson College, majoring in history and music. After college he moved to Boston, where he studied fiction and journalism at the Harvard Extension School and at Grub Street. He is currently working on a new book on bullying and a young adult fiction series set in a medieval-style period.

In his first year of high school, Ari was bullied and endured what felt like an eternity of fear, anxiety, and dread until the day a bystander intervened. Even better, he witnessed a technique used by the bystander that rendered the aggressor’s bullying behavior ineffective. From that day on, Ari put the technique into practice and was never bullied again. He is a passionate proponent of educating youth on bullying and individual empowerment techniques.