Spotlight on the Program: WaterBotics and GADgET at Triton College 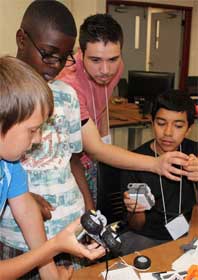 Not too many children can say they spent the summer programming robots that could swim underwater or constructing gadgets of their own imagination with tools they had never used before. For two weeks in July, Triton College’s Engineering Technology program provided youth the opportunity to showcase their creativity and work on projects with a STEM focus during its innovative summer youth camps, WaterBotics and GADgET.

The two camps are designed to expose youth to career possibilities in science, technology, engineering, and mathematics by introducing them to STEM professionals and Triton students currently pursuing their education in a STEM subject.

Sixth, seventh, and eighth graders dove into WaterBotics Camp from July 16–19, where they used logic and creativity to construct robots out of Legos®, then programmed them to swim underwater and accomplish specific tasks. All of the camp participants agreed that programming the robots was difficult, but by working with others, they were able to figure it out.

“It was definitely a challenge,” said 14-year-old Malek Sarhan. “Something seemed to always go wrong, but as a team, we would correct it and try again.”

Several of the students were enthused about one day becoming an engineer. “I love that in engineering you get to make robots from your own hands and program it to do what you want,” said 14-year-old Brandon Silva. “This camp has taught me that engineering is about more than building; it’s about the idea process of it too.”

Triton College Engineering Technology instructor Antigone Sharris believes that by exposing youth early on to STEM careers in an engaging atmosphere, they are more likely to develop an interest in their education and to work toward reaching their educational and career goals.

Following WaterBotics, GADgET Camp (Girls Adventuring in Design Engineering and Technology) empowered girls, ages 12 to 16, through the use of tools such as screwdrivers, hammers, and measuring tape to learn about engineering technology, which is currently a male-dominated field. The all-girls camp featured female role models in the industry and encouraged the girls to design and build their own “gadget” with tools and technology from Triton’s Engineering Tech lab.

The girls used metal, cardboard, plastic, foamboard, and wood for materials, and they received help in using heavy-duty machinery, like the drill press and table saw, to complete their projects that included a snack sorter, jewelry hanger, and light-up glasses.

Breanna Thompson, 12, said she struggled with her spinning LED light. “The wiring was difficult, but after I figured out what I needed to do, it wasn’t as complex as I thought,” she said.

Akeelah Taylor, 13, participated in last year’s camp and was inspired to become an engineer. “I like math and science and I like building, so I think I’d enjoy a career in engineering,” she said.

“Akeelah has always been a person to take things apart and work with tools and her hands,” said her mom Nicole Taylor. “And I appreciate how this camp allowed her to focus on a project and see it through to the end.”