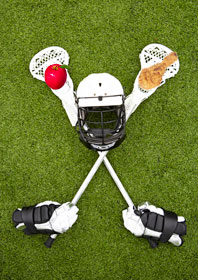 In the February 6 USA Today article "For parents, the search for summer camp is on," independent camp consultant Jill Tipograph pointed out two specialty summer camp sessions that are especially hot for camp seekers: cooking instruction and lacrosse.

We know our readers are nothing if not trendsetters, so we scoured our camp database to find the best culinary arts and lacrosse camps in the United States and abroad. Click on the camp names to view detailed program descriptions, age ranges, costs, and more.

Your DVR is overflowing with episodes of Top Chef and Chopped, you spend hours slicing and dicing instead of microwaving canned soup, and you joined Twitter just to follow @chefsymon: Sounds like a cooking/culinary arts program could be the missing ingredient from your summer.

Can we really call baseball "America's pastime" when it borrows so much from the British sport of cricket? Football rules the TV ratings, but it turns out viciously smashing your head against other heads for a couple hours a week is not so great for your brain. Basketball has always discriminated against the vertically challenged. And we were watching a fight the other day when a hockey game broke out.

It's not hard to see why lacrosse--a sport with Native American roots that may trace its origin to as far back as the 12th century--is gaining popularity among America's top young athletes. Check out one of the camps below to learn from expert instructors and compete against top athletes from around the country.