Swarthmore College, founded in 1864, is a private, liberal arts college with engineering. Its 425-acre campus is located in Swarthmore, 11 miles from downtown Philadelphia. 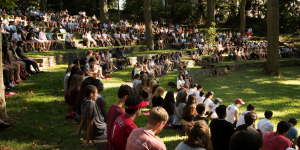 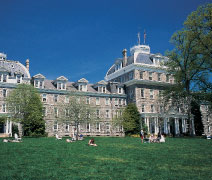 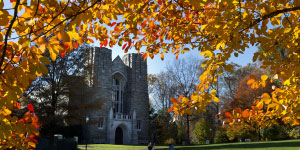 Don’t be fooled by the liberal arts label.

Swarthmore, Pennsylvania, is located 20 kilometers southwest of Philadelphia. Our idyllic 425-acre campus is a designated arboretum, complete with rolling lawns, creeks, and hiking trails. Downtown Philadelphia is less than 30 minutes away, and both New York City and Washington, DC, are a two-hour drive from campus.

Geographic Diversity: Students from all 50 states and 75 countries; 13% international students

International Student Services: Our International Student Center provides on-campus support specifically for international students. Other College offices also provide the same caring support that is available to all Swatties. This includes a 24-hour, seven-day-per-week staffed health center. All students have access to resources for academic support, religious/spiritual guidance, etc. Each August, the College hosts a special international student orientation program shortly before the broader first-year student orientation begins. Students enjoy a variety of activities on campus: all-campus parties, athletic events, music and artistic performances, academic conferences, movie nights, or just enjoying time with friends in a residence or dining hall. Swarthmore is proud to be a “cash-free campus”—that is, your annual activity fee covers all events on campus, so you don’t need to carry cash to pay for them. The activity fee also covers printing and laundry.

Swarthmore is located about 12 miles southwest of Philadelphia, the fifth-largest city in the United States. There is a train station on the edge of campus, and it’s a 25-minute ride to downtown Philadelphia on the direct commuter rail line. In addition, Philadelphia is a transportation hub for the East Coast. New York and Washington, DC, are two to three hours from Philadelphia. The Philadelphia International Airport is about 15 minutes away from campus by car.

Test Score Requirements: Applicants to the Swarthmore College Class of 2023 and beyond are required to submit either the SAT or ACT. We do not require the optional Essay section of the SAT or the optional Writing section of the ACT. If submitted, scores from those sections will not be considered in our application review. SAT Subject Tests are not required for admission but will be considered if submitted. Prospective engineers are encouraged to submit the Math 2 Subject Test. The TOEFL or IELTS is strongly encouraged for non-US citizens whose native language is not English and/or who are studying in non-English-language curriculums. In addition, students must submit certification of their family’s finances and secure a valid US visa. It is expected that students will be enrolled in the most challenging secondary school option available in their country’s educational system. Students will complete the same academic requirements to graduate as any other Swarthmore student.

Don’t be fooled by the liberal arts label. Swarthmore students in the sciences and Engineering win more than their share of National Science Foundation and other science fellowships. The programs in Astronomy, Astrophysics, Biology, Chemistry, Computer Science, Mathematics, and Physics are in a league with those at big technical universities. The difference at Swarthmore is that you can also pursue your liberal arts interests.

Academics that stretch your mind
Surveys of liberal arts colleges generally rank Swarthmore in the top three in the country. And it’s true that the academic life at Swarthmore is intense and exciting. It’s an alchemical mix of top-notch professors, brilliant students, excellent facilities, and an atmosphere with equal parts love of learning, cooperation, and mutual respect.

Swarthmore is exclusively undergraduate. That means the Engineering labs, weight room, radio station, and all other facilities are available just for you. So are the professors. (There are only eight of you for every one of them.) And because Swarthmore is small, you always have the chance to participate, even if you don’t make captain of the debate team or edit the newspaper.

Classes are tough, but you love them. Top grades aren’t the objective. You work hard because you want to, because there is nothing like knowing something new. You spend hours at dinner debating points of philosophy and language. You fall down laughing over biology jokes.

Come junior year, you can choose to study in Swarthmore’s unique graduate-style honors program, where you take final exams before a panel of distinguished scholars from other colleges. This will teach you more than you can imagine about the world, the process of learning, and—most of all—yourself.

Swatties are an unusual lot: smart, funny, a little off the beam. And they’re passionate about whatever they do, which is rarely what you’d ex-pect. Engineers go to Nepal to study philosophy. Philosophers edit chess magazines. Biology majors go on to medical school and develop a sideline in photojournalism.

You apply to Swarthmore because you love learning and you’re very good at it. What might surprise you, coming from high school, is that everybody here loves learning and is good at it too.

At first, being among this crowd can be intimidating. But when you discover how fast and how far they can take you intellectually, it starts to feel like flying.

Greta Studier ’19 designed components for NASA’s Mars rover in Swarthmore’s MakerSpace.
For her senior Engineering project, Greta Studier ’19 went from the MakerSpace—Swarthmore’s open and communal facility with resources for making, including tools for digital, mechanical, and manual fabrication—to outer space.

“The main mission is to be able to analyze Martian rock for evidence of past life,” says Studier, who previously interned at NASA’s Marshall Space Flight Center. “Instead of relying on the capabilities of a rover on Mars to analyze the content of Martian rock, we could instead bring it back and run more tests in a more robust laboratory on Earth.”

Studier, who was a co-recipient of the College’s McCabe Engineering Award and is working at JPL post-graduation, is grateful for the freedom of academic exploration afforded at Swarthmore.

“Coming into Swarthmore, I didn’t know what type of engineering I wanted to do, and taking a bunch of different courses at Swarthmore really exposed me to mechanical engineering and design,” she says. “Those courses that I took here really got me hooked.”

Tiyé Pulley ’19 won a Watson Fellowship to pursue documentary photography and filmmaking in Japan, Jamaica, and Ethiopia.
Tiyé Pulley ’19—an Art major with a Film minor from Annandale, New Jersey—never thought of himself as a filmmaker...that is, until his sophomore year, when culminated racial and political frustrations gave form to his first script.

With encouragement from his screenwriting professor and help from a Lang Center summer grant, Pulley was able to bring his vision to life in a way he didn’t even realize was possible.

“All of my academic experience prior to this had been concentrated in the world of papers, research, exams, and staring at a chalkboard, not understanding why I should care enough to do more than pass the class,” he says. “But working with my hands in the visual arts gave a tangibility to my dreams.”

Pulley, a Studio Art major, is now travelling to Japan, Jamaica, and Ethiopia on a Watson Fellowship to document through film and photography how skateboarding culture influences these places’ other art and subcultures.

“It’s honestly just really cool to be out of school and have a funded year of travel where I can focus on my art and the stuff I’m interested in,” he says. “Hopefully I’ll be able to make a photo book or documentary out of the experience and put it out.”

“I’ve always found myself surrounded by broken women who never received sufficient awareness to determine their own paths,” she says. “I developed the program to empower these girls to become the pioneers of change in their societies.”

Berjawi found inspiration for the BetterFly Camp from her work with the Danish Refugee Council the summer after her sophomore year, which was made possible by an Opportunity Scholarship from the Lang Center for Civic & Social Responsibility.

“I don’t think I would have been able to do it otherwise,” she says of the Lang Center. “They’ve been there, backing me up all the way.”