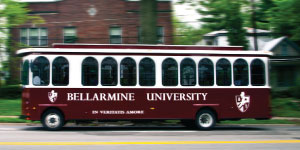 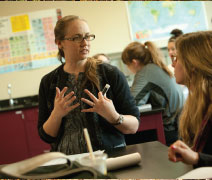 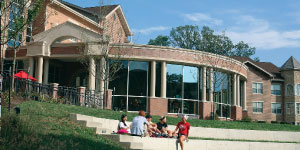 Where college is awesome

Bellarmine University Students:
Look you in the eye and say hello
Respect each other and everyone else
Hold the door open
Bless you when you sneeze
Pursue the truth
Take advantage of Louisville internships
Serve others
Love Bellarmine

There’s been a lot of debate in the media lately about the value of a college education. It’s no secret that good jobs are hard to come by for young people andthat college is expensive. Some pundits have even gone so far as to claim that a college degree might be less than totally awesome. Butask Bellarmine University students and they’ll say college is both awesome and worth it.

So what about those negative claims? Some naysayers are citingthe job market as evidence that a college education is a bad investment. The cost of education and the debt incurred by many students is often a tough mountain to climb when high-paying jobs aren’t readily available.

But a recent study by the Pew Charitable Trusts shows the drop in employment and income during the recession was much harder on people who lacked a college degree. Those without a bachelor’s or associate degree had a staggering 53% unemployment rate. On average, the study showed people who graduate with a bachelor’s degree will earn more than $1 million more over the course of their career than those with only a high school diploma. The bottomline: the key to opportunity and social mobility is still a college degree. As the New York Times put it, “Over the long run, college is cheaper than free.”

And that’s just a small benefit of going to college. Studies also show jobs with better pay are considered by workers to be more rewarding jobs. And there is, of course, the smarts, refinement, fun, and personal growth that come with college. As one current Bellarmine student said, “When I came to Bellarmine, I was a kid. Bellarmine is where I grew up. College is the link between being a kid and being an adult. I wouldn’t trade it for anything.”

Catholic tradition of educational excellence
So, why Bellarmine? Because it’s awesome.

Bellarmine University is a vibrant community of educational excellence and ethical awareness that consistently ranks among the nation’s best colleges and universities. Our students pursue an education based in the liberal arts and the distinguished, inclusive Catholic tradition of educational excellence—the oldest and most rewarding in the western world. It is alifelong education worthy of the University’s namesake, Saint Robert Bellarmine, and his invitation to each of us to learn and live in veritatis amore—in the love of all that is beautiful, true, and good in life.

Louisville, the livable city
On the edge of downtown Louisville—routinely ranked among the nation’s most livable cities and a top travel destination—Bellarmine is set on three beautiful hills in the artful and eclectic Highlands neighborhood. We are within walking distance of the Bards-town Road corridor, where coffeehouses, restaurants, and one-of-a-kind shops add to the overall Bellarmine experience. Downtown Louisville is just minutes away from campus and offers world-class theater, arts, sports, museums, and gorgeous riverfront parks. Louisville is situated on the mile-wide Ohio River, at the gateway to the South and the crossroads of the Midwest. Two-hundred million people—two-thirds of the nation’s population—live within a 500-mile radius of Bellarmine.

One of America’s prettiest campuses
Our 145-acre campus comprises 55 buildings, including the world-class W.L. Lyons Brown Library, the Norton Health Science Center, and halls home to nursing, education, and the arts and sciences. Bellarmine boasts eight residence halls, an architectural gem of a chapel, a campus center, and the University quadrangle. Our recreational facilities include indoor and outdoor tennis courts, a fitness center, and athletic fields, including the state-of-the-art Frazier Stadium, home to field hockey, lacrosse, soccer, and track & field. Our campus built on three hills and our award-winning architecture evoke the beautiful Italian hill towns of Tuscany, birthplace of our patron.

The student experience
A diverse student body from 21 states and four foreign countries attends Bellarmine. Our total enrollment is 3,369, of which 2,552 are undergraduate students. ACT composite scores range from 22–28 for the middle 50% of students. Our student-faculty ratio is 11:1. Our average class size is 20. There are 39 students or fewer in 91% of our classes. Teaching and learning like this just doesn’t take place at the megaversities, and it shows in our high four-year graduation rates and the successful careers of our more than 25,000 graduates throughout the world.

Price, cost, and value
In 2019–2020, tuition and fees cost $42,430; room and board cost $9,030. After financial aid, the actual cost is almost always far lower, and its enormously high value is an investment in your future. We provide millions of dollars in institutional scholarships and grants to entering students each year. Award amounts are determined on an individual basis and celebrate the strength and achievement of each admitted student. A person, not a computer, processes your application.

We understand that the cost of an excellent private higher education like the one you’ll get at Bellarmine University is a major consideration for you and your family. We also know that when it comes to investing in a secure, successful future, families don’t want to cut corners, sell themselves short, or settle for mediocrity. A Bellarmine education is an investment that will pay exceptionally highreturns for a lifetime. It’s Bellarmine University’s goal and commitment to ensure that every student receives ourbest comprehensive offer of financial assistance and that your affordable investment in a Bellarmine education becomes a reality. To find an estimate of your actual cost, please visit bellarmine.edu and use our net price calculator.

Awesome college, awesome financial aid
Is college expensive? Yes, but with generous scholarships, grants, work-study, and other financial aid, the cost comes way down. The average amount of institutional aid last year was over $28,000. And the investment in your future is priceless.
Whatever you do, we hope you’ll get a college education. But we really hope you’ll get a degree at Bellarmine University, where college is awesome.