Reed, founded in 1908, is a private liberal arts college. Programs are offered through the Divisions of the Arts, History and Social Sciences, Literature and Languages, Mathematics and Natural Sciences, and Philosophy, Religion, Psychology, and Linguistics. Its 100-acre campus is located in Portland. 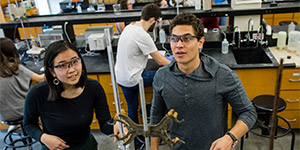 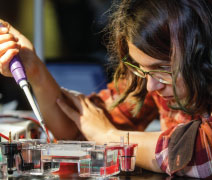 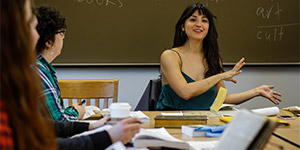 Spotlight on: Research in the Medical Field at Reed

Professor Erik Zornik was awarded a grant from the National Institutes of Health to support his research on mechanisms in the brain that generate rhythmic behavior. Because many neurological disorders involve disruptions of normal rhythms, the overarching goal of the research, he says, “is to discover novel mechanisms that underlie rhythm generation, potentially leading to novel treatments.”

• Percentage of students from outside the Pacific Northwest (Idaho, Oregon, Washington): 83%

• The College offers a Bachelor of Arts degree in 26 departmental majors, 16 interdisciplinary areas, and dual-degree (3-2) programs in Engineering, Forestry, and Visual Arts.

• Graduate schools most frequently attended by Reed alumni for Law, Medicine, Business, and other graduate study include the Universities of Chicago, California, Oregon, and Washington; Yale; Harvard; Stanford; Cornell; MIT; and Johns Hopkins.

• Reed has produced the second-highest number of Rhodes Scholars from a small college (32).

• “A Tale of Two Proteins: Towards Cloning, Expression, and Purification of the bHLHZip Domains of MondoA and M1x”

• “Action of Cytoskeletal Crosslinking Proteins in Nuclear Positioning and Migration”

• “Intersections of Global Capitalism and Indigeneity: Problems of International Environmental and Social Justice”

• “Suspending the Plot of the Real: Narratives of Collective Action in Chicana/o Literature and History”

• “Islam on the Inside: An Ethnographic Case Study of Muslims in an Oregon Prison”

• “The Dynamics of a Nonlinear Time-Delayed Electronic System”


What Do Reedies Do in the Health and Medicine Fields?

Reed College is located 10 minutes from downtown Portland, Oregon, a vibrant metropolis of waterfalls, bridges, and parks of every size.

For more than a century, the College has been a nexus for a diverse group of scholars who wrestle with big ideas and explore ways to apply those ideas to the world around them. Learning is cherished at Reed; it isn’t outside the norm to talk about your passions and discoveries. If you’re ready to look beyond the superficial, seek the truth, and discover unlimited possibilities, you’re ready for Reed.

With a student-faculty ratio of 10:1 andall classes taught by professors rather than teaching assistants, undergraduate education comes first at Reed. The conference method of learning brings together small groups of students to discuss great ideas, read primary texts by leading thinkers, and form opinions and defend them with skill and nuance. Guided by a thoughtfully constructed sequence of topics and architecture of ideas, students map an academic course that culminates in the senior thesis. They work alongside their professors, with whom they share a deep enthusiasm for scholarship, inquiry, and academic excellence.

Asking questions is a social activity for Reedies. You’ll overhear heated debates about Plato in the Sports Center and get caught up in string theory on the Quad. Whoever you are (even if you’re still deciding who that is), you’ll find that the Honor Principle supports differences and creates respect within the Reed community. Reed is a humanizing place of infinite subsets that offer you the opportunity to be yourself across all your interests. You’ll find your tribe in the classroom, exploring Reed Canyon, or hiking in the Cascade Mountains.

Four years of college can seem like a long time and paradoxically like no time at all, but your time at Reed will leave an imprint on you that will extend throughout your life; once a Reedie, always a Reedie. Exposure to the primary disciplines of human knowledge prepares graduates to go on to fascinating professions in science, art, medicine, global politics, education, and the environment. Reed ranks among the top undergraduate institutions in the nation in the percentage of graduates going on to earn PhDs in Physical Sciences (ranked #3) and the life sciences (ranked #2).

Student life
While there is a robust outdoor program, a recently renovated sports center, and a long tradition of club sportsat Reed, there are no varsity athletic teams. Campus social life is open toall, with no exclusive clubs or organizations; there are no fraternities or sororities at Reed. Some of Reed’s organizations include the Black and African Student Union, KRRC-FM (the campus radio station), a constantly growing comic book library, Oh For Christ’s Sake (Christian organization), Chabad (Jewish cultural organization), The Creative Review, the Feminist StudentUnion, and the Bike Co-op.

Pre-health advising at Reed
Reed has a team of four interdisciplinary faculty members in Psychology, Biology, and Chemistry, as well as a designated Pre-health advisor in the Center for Life Beyond Reed office, who serve as Pre-health advisors. This team collaborates to work with students one-on-one, offering support in Pre-health exploration, continuing education, and the application process. They also advise on events and volunteering to gain experience.

Students have access to all these members of the Pre-health committee as well as a plethora of engaged Reed alumni and volunteers. Alumni comeback to campus to support students and invite Reedies into the hospitals, universities, and clinics where they work for volunteer or job shadowing experience.

Spotlight on: Research in the Medical Field at Reed
Professor Erik Zornik was awarded a grant from the National Institutes of Health to support his research on mechanisms in the brain that generate rhythmic behavior. Because many neurological disorders involve disruptions of normal rhythms, the overarching goal of the research, he says, “is to discover novel mechanisms that underlie rhythm generation, potentially leading to novel treatments.”