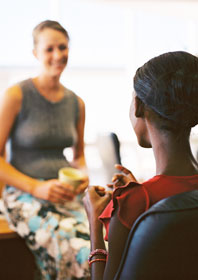 Half of the U.S. youth population (17.6 million kids) is considered "at-risk" of getting into trouble with the law, or "high-risk" and already in trouble. One solution that has been proven to work is mentoring.

Half of the U.S. youth population (17.6 million kids) is considered “at-risk” of getting into trouble with the law, or “high-risk” and already in trouble. Abuse, neglect, drug addiction, and more dire issues are major concerns in this country and around the world. One solution that has been proven to work is mentoring.

A mentor is a loyal advisor, a teacher or coach, a confidante and role model. He or she is a special friend who serves as an advocate and makes an effort to bring out the mentee’s best qualities. As a college counselor, you may already have some trouble allotting as much time as you would like to your students, but if you can, and if you can mentor others, you may an even greater impact on that child’s life than just helping them find their dream college.

So what, exactly, does mentoring entail? It’s not tutoring, which involves the teaching of a skill or discipline. Mentoring depends on the nurturing of a close, personal relationship. While helping with schoolwork can be a part of it, that’s just one aspect. Mentors inspire us to try harder and give us the confidence to reach for more ambitious goals. They teach us how to make good choices and open doors to new opportunities that normally wouldn’t be available.

A mentee, or protégé, is a novice, student, or learner. Mentored youth can be of any background and religion. They generally come from disadvantaged homes in poor communities. All children can benefit from the support of a mentor, but these particular kids especially need our help.

Research has shown that those who are mentored have improved school attendance and better academic performance, a better attitude, less hostility, more self-esteem, and many other improved qualities that are too numerous to name. Mentoring transforms young lives!

For example, Tasha lived in a poor neighborhood in South Los Angeles. A bright girl with many talents, she didn’t get along with her dysfunctional family. When she was 13 years old, she began running away from home. Tasha hung out with boys who got in trouble with the law, and she was sent to a number of detention institutions over the next few years.

Through Create Now, a charity that I founded in 1996, I met Tasha at a detention facility when she was almost 16. She eagerly signed up for our TV Writing Workshop with a professional writer. When Tasha was released from the detention facility and returned to her home, the mentor continued to visit her weekly. They formed a strong bond. When Tasha graduated from high school, her mentor helped her apply to USC Film School and arranged for a scholarship. The girl was one of only 50 people in the world to be accepted into their film program. Tasha moved to Chicago where she attended her first year of law school at the University of Illinois. She’s now writing film reviews for the Chicago Examiner and performing standup comedy around the country. She attributes her success to Create Now and her mentor’s support.

Mentors benefit greatly from their experience. It’s a powerful feeling to know that you’ve made a difference in someone’s life. Most mentors grow on a personal and professional level through this process. They also learn about different cultures. Many people who mentor develop leadership abilities and have a more profound understanding of children. Their own family bonds strengthen, plus they receive admiration and respect from their own peers.

There are different kinds of mentoring, including one-on-one mentoring, group mentoring, team mentoring, e-mentoring, and more. Peer mentoring is very popular with students, since kids would rather take advice from their peers than an adult. Another successful model is when older youth (such as high school students) mentor younger kids. Not only does it look great on their applications for jobs and colleges, but also their own confidence and self-esteem are enhanced when the younger children look up to them as role models. Long-term friendships often form.

If you want to mentor youth, think carefully about what your needs are and how you can best serve children before you decide which type of mentoring program is right for you. Visit MENTOR at www.mentoring.org to find a local mentoring program in your neighborhood where you can volunteer.

If you want to recruit volunteers to start a mentoring program at your school or facility, get listed on the MENTOR site. Reach out to your community by posting notices on www.volunteermatch.org and www.idealist.org. Network at local events, such as the Chamber of Commerce, library functions, and school gatherings. Put up notices at religious centers and community bulletin boards, and pass out flyers at popular gathering places.

You can also host a special project, such as painting a mural, cleaning up rubbish in a park, hosting a carnival, or taking senior citizens on an outing and see which mentoring relationships form naturally. Otherwise, arrange mentoring matches based on the goals and interests of the students and the mentors, as well as geography and schedules. Use your intuition too.

Be sure to carefully screen mentors by having them fill out an application and undergo an orientation and interview. Do a background check and security clearance on them (fingerprinting, references, TB, and Whooping Cough vaccinations if needed). If you’re not sure if someone would be a good mentor, then it’s better to err on the side of caution. A child’s safety should always be your first concern.

There are a lot of things that mentors can do with their mentees. Many of these kids have never been out of their own neighborhoods. Mentors could take them to the beach, the mountains, a movie, a restaurant, or a museum. Expose them to cultural events like the theater, museums, and the circus, or just hang out and talk.

Most importantly, listen! All kids need to communicate and vent. It’s important that mentors hear what they say and be as open-minded as possible. Most kids need reliable adults with whom they can talk about their fears, dreams, and concerns. Mentors serve as sounding boards, and, when asked, someone who can give trustworthy advice.

At-risk youth may not have any adults in their lives with the time, interest, or ability to listen to them. High-risk youth who live in residential institutions like shelters, foster group homes, and detention facilities may not confide in staff members, administrators, or even psychologists for fear of punishment. Yet they might share secrets with their mentor because of the trust that they have developed. It usually takes time, but when youth know that they can count on their mentor, they will start to open up.

Mentoring requires commitment and responsibility. Mentors must keep their word and be dependable to have a positive effect. If they break their word, they will do more damage than good. Many of these children have been let down by adults most of their lives. Imagine if a mentor comes along, full of hope and excitement, and reaches out to lend them a hand. They spend time together and bond. They slowly open up and start to trust a positive adult. But then something changes in the mentor’s life; perhaps he gets promoted to a different job in another part of town, or she has a new boyfriend who takes up all of her free time. Abandonment can be devastating to any child, especially at-risk kids.

It’s okay if mentors only have sporadic time available to mentor, since even a short relationship devoted to a youth plants seeds in fertile young minds and is better than nothing. But it’s essential that you as the facilitator, and also the mentor, communicate this clearly to the mentee. The most important thing is not to set their expectations high only to let them down later. If mentoring relationships must end, give them closure by organizing a celebratory party, even with Certificates of Completion. Leave doors open for future communication between the mentors and mentees.

These children represent our future. Through the support of mentors, we can introduce them to a larger world where they are contributors instead of just more statistics. No matter where mentors live or what they do, they can impact a child’s life. Mentors can make a big difference in your community, and the world!