Things I Wish My College Counselor Had Told Me 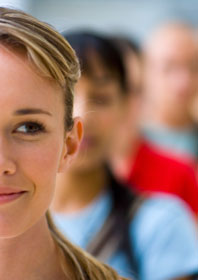 Addressing each and every college-related topic, from academics to social life, with college-bound high school seniors can be a difficult task for college counselors. First, it's part of your job to make sure students have everything they need in order to be accepted to the schools of their choice. Once that is all said and done, though, there is the actual prospect of attending college, and for some students, this can seem like a plunge into extremely unknown territory.

What is the #1 difference between a high school senior and a college freshman? Well, about three months. Besides that, it's the fact that as a high school senior you're a big fish in a small pond, and as a college freshman you're a small fish in a big pond, to use the hackneyed expression. When I started college, I was one of about 4,200 new freshmen at a large university that at first seemed like a city in and of itself. As much as I thought I had prepared, there were things I wish I had known before being thrown into unknown territory. No matter what the size of the school students are planning to attend, college comes complete with curve balls. The following advice is what I learned through trial and error over my four years of college and what I can now share with future generations of college students.

Okay, I hate to be the one to break the news, but joining all those clubs and organizations in high school to put on college applications isn’t over for your students quite yet. Now that they’re off to college, it’s even more important for them to stay involved in campus activities and clubs because in four short years they’ll be applying for jobs, and being part of the Campus Democrats might actually help them land that first job in politics. One of the great things about college that often differs from high school is the wide variety of clubs for everything you can imagine. If there is a club that doesn’t exist, oftentimes all it takes is a few friends and a professor to sign off on it and a new club is born. Do you have students who have always dreamed of being on the radio, writing for a newspaper, or being involved in television production? Many schools have radio stations, student-run newspapers or magazines, and television studios where they can volunteer to work. They might develop a skill they never knew they had or, on the contrary, realize that working at a daily newspaper isn’t for them at all. Either way, getting involved in activities always helps to filter interests and skills for the future. Plus, students often meet people with similar interests to them and engage with upperclassmen who can provide advice on where to live next year, the best dining on campus, and which classes to avoid.

“Get to know your professors!”

This can seem like a difficult task for students planning to attend a large college or university, but hope is not lost. Once on campus, students will find that college professors and student teachers will stress coming to office hours, an excellent way for students to interact with professors on a one-on-one basis and get additional help on class material. Getting face time with a professor, particularly in lecture classes, is a great way to get recognized and stand out amongst the hundreds of other faces that might surround a student in Psychology 101. Even stopping by for 15 minutes in between classes and asking the professor a few questions really shows that students care about their education and take their academic responsibilities seriously. Do you have students thinking about studying abroad or getting an internship in college? Both will most likely require letters of recommendation, and having a few professors that know them is extremely helpful when it comes time to send in those applications.

“Don’t pay more for school than you have to!”

College is an investment. An investment that students and parents often are paying off years after graduation. That said, scholarships are an incredibly resourceful way to minimize those future loans. Tell your students they shouldn’t assume that they don’t qualify for any scholarships because they weren’t all-star football players, first-chair violin in orchestra, or weren’t voted “Most likely to be the Next Albert Einstein.” Scholarships are available for a wide range of students, and all it takes is some research to find out which ones they’ll qualify for. Start by checking out the scholarship database on CollegeXpress.com to help them find scholarships based on their interests and qualifications! Thousands are available each year and many only require a simple application and essay. Your students shouldn’t let free cash slip through their fingers because they couldn’t find time to write an essay--they’ll thank their future selves when student loans start coming due!

A dorm-bound student might think he’ll wear that shirt that's been in the back of his closet for the past three years, but he won’t. Anyone who’s ever visited a college dorm room will know that the closet space--and walking space, for that matter--is very limited. Tell your students to do themselves and their roommates a favor and avoid trying to fit their entire high school bedrooms into their new college dorm rooms. They should take advantage of under-the-bed space and pick up a couple shallow plastic bins that can be used to store things they don’t use too often. It may sound simple, but they should also talk to their roommates before moving in and decide who will bring the microwave, coffee maker, television, etc. It will avoid those awkward situations of having two DVD players and no television to hook them up to!

Assuming they’ve already done extensive research before deciding on which schools to apply to and which one to matriculate into, your students should be research pros at this point. That said, they shouldn’t stop once they get to college. Many students make the mistake of not exploring all the opportunities their schools have to offer. A student who always wanted to play rugby but his or her high school didn’t have a team might check out the club and recreational sports offered in college; they’re a great way to stay in shape and meet friends, yet not as time-consuming as varsity athletics. Encourage your students to explore the city or town where you they’ll be attending school as well. Getting off campus and seeing what the local community is like can make them feel more comfortable when they arrive on campus as freshmen. Businesses in college towns often cater to students, providing discounted food in restaurants, student discounts at retail stores, and free admission to local museums and art galleries. They should take advantage while they can--after all they’re spending on college, they deserve a free meal!

“Professors are not your enemies!”

Tell your students that getting a “C” on their first paper in Introduction to Philosophy doesn’t mean their professor is out to get them. They can take advantage of the situation by going to office hours and discussing the paper one on one. The professor will see that they’re serious about their work and want to try to improve their grades on the next assignments. Plus, getting face time with a professor allows them to establish relationships beyond the three hours a week the class meets, and this can come in handy in the future (see point #2).

"Don’t get pressured into opening a credit card!"

In the first couple weeks of college, there will likely be credit card companies set up in the student union or other student gathering areas, offering students free T-shirts to open up credit cards. If not in person, they’ll get offers in the mail for reward programs for the more money they spend. Students who don’t already have a credit card would be wise to not open one as soon as they get to college. Credit card debt is no joke, and college freshmen are particularly susceptible to these financial quagmires. Debt racks up quickly when you don’t see the money immediately taken out of your bank account, and even one late payment can lead to a bad credit history. Credit cards are a slippery slope, and students shouldn’t fall prey to the notion that once in college owning a credit card is just part of the experience. They’ll be happy when they’re not still paying off those late night pizza runs five years out of college.

This might sound like the most cliché phrase in the history of advice to college students, but they shouldn’t take it lightly. What many students underestimate before they get to college is how much free time they’ll have during the day. It’s true that the work load is heavier and assignments are more time-consuming, but the amount of in-class hours is often less than high school. That said, successful college students are planners. They know when assignments are due, how long they need to spend on them, and how to properly utilize their time if their first class of the day begins at one o’clock. Having so much free time coupled with no parents reminding them to stay on task can be challenging. They can use those free hours during the day while their roommates are in class to have some quiet study time, so that later on they won’t have to miss out on the throwback Nintendo 64 video game marathon going on down the hall!

Every student’s recipe for a successful college career is different. No one piece of advice is going to apply to students across the board, but these general tips might give some guidance to students who may be overwhelmed with the transition. The best decision I ever made in college was joining activities that I had no prior experience doing. Getting out of my comfort zone and discovering a talent or interest that I never knew I had helped me decide on a major and a career path. It’s easy to let college pass you by in four short years by just going through the motions. Encourage students to make the best of their time, get outside the dorm and the classroom, or join a unique club, because they never know where it could lead!