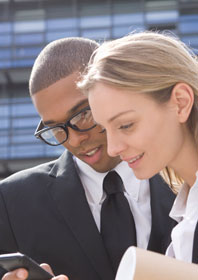 Where is the M.B.A. headed? And what should you consider as a potential M.B.A. program applicant? Editor for The Economist Bill Ridgers shares his insights and top 10 tips for finding the M.B.A. program that's right for you.

There is a touch of doom and gloom surrounding the M.B.A. at the moment. Last year just 116,000 Americans took the GMAT, the de facto entrance exam for business schools. Ten years ago 160,000 did. The days when an M.B.A. guaranteed a fast-track career with an eye-watering salary to match have faded. Even though fewer M.B.A.s are hitting the job market, a recent GMAC report suggested that M.B.A.s wages aren't keeping up with inflation.

I recently wrote a lengthy piece for The Economist suggesting that mid-tier American schools are in trouble: "In 2010 the average tuition fee charged by American institutions ranked within our top 100, but outside of the top 15, was $81,911 for the full two years. The average basic salary of those schools’ freshly minted M.B.A.s was $81,178 a year. Five years ago tuition at the same cohort of schools was nearly $22,000 cheaper—$60,247—while the average salary, $78,442, was barely less than today’s."

Clearly the value proposition has changed. So does this mean that prospective students should give up on the idea of a business education? I think not. The MBA has proved a resilient beast over the last hundred years. It is not the first time that it has faced a crisis of confidence. In the 1950s, business schools were sneered at by other university departments for being non-academic—mere vocational qualifications. Then, just a few decades later they were criticised for being too academic and lacking practical relevance for managers. After the Enron scandal in 2001, the corporate world was being derided as unethical and much of the blame was laid at business schools’ doors, as it was a decade later when the credit crunch hit. Yet, at each hint of trouble, the M.B.A. has reinvented itself.

It will have to do so again. The two-year full-time experienced, so cherished by U.S. universities, will come under pressure. Northwestern University’s Kellogg school has begun to rethink the model. Asian students, on whom the future growth of the M.B.A. depends, are less likely to give up two years out of the workplace, particularly when compared with the opportunity cost of heading to Europe, where programs can be half the length yet a fraction of the cost, and students often earn higher salaries once they graduate.

The one piece of advice I have always given prospective students is to aim as high as you dare when applying to business school. In a world in which an M.B.A. is seen by some as a commodity, the way to differentiate yourself from the market is by having the most prestigious degree possible. This doesn’t have to be from a full-time program. Part-time and distance learning M.B.A.s are no longer considered the poor relations. But for those considering applying to business school, there are some standard considerations. I can offer 10 areas in particular that will need careful evaluation.

For more tips, application advice, and business school news, or to network with Economist editors and other current and prospective students from around the world, please visit  www.economist.com/whichmba.