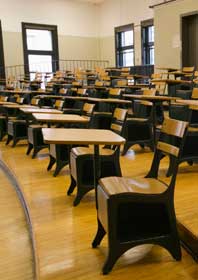 What Do You Expect? University in the United States

From a distance, it's easy to develop an idealized image of U.S. university life, but what happens when those expectations don't mesh with reality?

From a distance, it's easy to develop an idealized image of U.S. university life, but what happens when those expectations don't mesh with reality?

Before attending Drake University in Des Moines, Iowa, Shivkumar Morjaria only understood life in the United States from the American movies, news, and media he could access from his home in Kenya.

“I expected life to be extremely fast paced with people too busy to learn—or care—about others’ problems,” says Morjaria, now a sophomore. “I was also worried about the number of friends I would make, as I am from a completely different culture.” He was worried that American societal expectations, humor especially, would be lost on him. With those expectations in mind, Morjaria prepared to receive little support from his peers and be extremely independent at university in the United States.

At Drake, Morjaria found cultural differences were not as difficult to overcome as he had expected, and American students actually found his life in Kenya extremely interesting. “I was shocked at how little they seemed to know about life outside the United States,” Morjaria says. He was surprised that he was easily keeping up with the pace of life and his academic load—Morjaria has a quadruple major in actuarial science, finance, mathematics, and information systems—and by his first week he had made great friends and met almost everyone in his dorm.

“The cultural gap was not nearly as wide as I thought it would be, as the American students understood and, luckily for me, appreciated my humor,” says Morjaria.

In the middle of October of that year, Morjaria was diagnosed with Hodgkin’s lymphoma, a life-threatening illness. It was during this time, he says, “I truly learnt the error of my perception of Americans.” Morjaria’s new friends at Drake were by his side throughout his treatment, which continued into late April. His residence hall even held a fundraiser and shaved their heads, raising $3,000 for the Iowa chapter of the Leukemia & Lymphoma Society. His fraternity also gave him $2,500 to help pay for his treatment.

“The level of support I received was greater than anything I would have gotten in Kenya,” says Morjaria. “I am extremely grateful to my American friends and faculty, and can never hope to pay them back for the kindness they have shown me. So, yes, American lifestyle and culture took me by surprise—the most pleasant surprise I have ever received.”

The size of the United States is often intimidating for students from smaller countries. Ben Fredrickson, a junior from Wellington, New Zealand, says arriving at Regis University in Denver, Colorado, was an eye opener—the city had the same population as his entire home country. Despite this difference, the exercise science and physical education major says he felt he was a part of a close community almost immediately after he arrived, which helped him adjust and make friends quickly.

“I am to this day still so surprised with how kind everyone is here,” Fredrickson says. “I think America as a country is really trying to strive to be better and is driven by individuals like the ones I have encountered, who are so kind and hard working.”

A large part of that welcoming committee was the admission staff at Regis, who Fredrickson says worked through the particulars of an American higher education system with him. Understanding the American grading policies, choosing a major, and acclimating to general educational system differences add more work to an international student’s first semester. Especially since Fredrickson needed to maintain a certain GPA to play soccer for Regis and keep his scholarship, he says the admission staff was essential to his early success.

Before coming to the United States, Fredrickson had also heard American sports teams always had amazing facilities. He was surprised to find that the trainers, coaches, and athletic department were both impressive and extremely professional as well. A large part of Fredrickson’s support team at Regis was his head soccer coach, Tony McCall.

“Without his belief in me, none of this would have been possible,” says Fredrickson. “Coach McCall and the other assistant coaches made me feel like a professional athlete right from the start. They took the time to explain everything to me that I needed to know . . . and they made me feel like I was really wanted here.”

“Everyone who knows us and has gotten to know us has seen things from another point of view,” Fredrickson says. “I believe it has not only widened our experience of the world, but also brought that wealth of life experience to the lives of the Americans who we have met.”