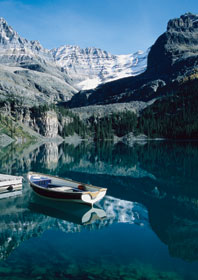 Canada enjoys a well-earned international reputation for the strength and quality of its political, economic, and educational institutions, ranking high on the United Nations' list year after year for being one of the very best places in the world to live and work.

Canada enjoys a well-earned international reputation for the strength and quality of its political, economic, and educational institutions, ranking high on the United Nations’ list year after year for being one of the very best places in the world to live and work. Canada is a multicultural nation, officially bilingual in English and French. Canadians across the country understand the value and benefits of living harmoniously and productively within a culturally and linguistically diverse society.

More than 100,000 students from around the world are welcomed to Canada’s public and private universities each year, drawn by the consistently high quality of education and the country’s cosmopolitan communities and campuses.

The second-largest country in the world in terms of landmass, Canada offers geographic and climatic diversity, from the temperate rain forest on the Pacific West Coast to the rugged coastline of Canada’s Atlantic provinces to the High Arctic. Though well known for majestic snow-capped mountains, wide plains, sparkling lakes, and thick forests, Canada also boasts some of the most exciting and cosmopolitan cities in North America, offering a wealth of cultural attractions and affordable and extensive public transportation systems.

Education in Canada is the responsibility of provincial (not federal) government. Each of Canada’s 13 provinces and territories establishes, funds, and assures the quality of public universities within its jurisdiction. In addition, approximately 90 of Canada’s universities are also recognized through membership in the national Association of Universities and Colleges of Canada (AUCC), headquartered in Ottawa, the nation’s capital. However, international scholars can choose from more than 160 degree-granting colleges and universities located in cities large and small across Canada, with programs, tuition costs, and living experiences to suit every student’s needs.

Research of global significance is conducted in Canada’s major universities, and not just at the graduate level. Increasingly, students are invited to participate in research projects as part of their undergraduate experience. Some of the most sophisticated laboratories, research facilities, and extensive libraries in the world—in fields as diverse as particle physics and international law—are located in Canada’s top-tier universities.

Canadian universities offer bachelor’s, master’s, doctoral, and professional degrees in the fields of medicine, health science, law, business, education, and others. A Canadian bachelor’s degree is typically a four-year program, fully equivalent to degrees from the United States and from other Commonwealth nations. Well-prepared students have access to numerous program options, leading to internationally recognized degrees in virtually every discipline in the arts, humanities, life and physical sciences, health sciences, business, engineering, education, environmental studies, and more.

Students applying to a Canadian university will need to have graduated from an accredited college preparatory program. Many Canadian universities recognize enriched programs, such as the International Baccalaureate Diploma, Advanced Placement exams, the General Certificate of Education, or the baccalauréat français, with first-year transfer credits on a course-by-course basis. Standardized tests, such as the SAT or ACT, may also be a requirement for those following a U.S.-style curriculum.

Most university programs are taught in English, and evidence of English proficiency is a standard requirement. Each institution publishes its own particular requirements but typically requires proof of English as a first language or a set number of years of schooling in English prior to admission. Students may also demonstrate their proficiency by meeting stated minimums on one of the internationally recognized proficiency tests of English, such as TOEFL or IELTS.

As a rule, Canadian universities do not require essays, teacher references, or lists of extracurricular achievement in addition to academic achievement. However, some institutions may invite students to provide a personal statement, and others may ask for supplemental applications for more competitive programs. Programs in the visual or performing arts may require submission of a portfolio or an audition. Additional information may also be required for scholarship consideration.

The academic year in Canada begins in September and ends in late April or early May. Some schools offer summer sessions, but with a more limited number of course offerings.

For international students, studying at a public university or college in Canada is relatively affordable, compared to similar institutions in the United States or the United Kingdom. The cost of living is also generally lower in Canada, offering students exceptional value in relation to the quality of education.

Nevertheless, a Canadian education is an investment, and Canadian universities expect that international students and their families will take primary responsibility for the costs of their tuition and living expenses. Students should be aware that international undergraduate tuition fees vary by institution and frequently also by program. As tuition fees are generally payable in Canadian dollars, fluctuations in the international exchange rate are to be expected over a four-year program of study.

All Canadian universities offer some form of scholarships and financial assistance to their students, but with differing levels of funding available, depending on visa status. Generally, merit-based scholarships are open to all students, but need-based funding is more limited.

More than half of Canada’s universities offer first-year entering scholarships recognizing academic merit to both international and Canadian students. Most universities will allow international students, once enrolled, to compete alongside Canadian students for donor-based awards and prizes, faculty-recommended awards, and other forms of recognition based on academic achievement.

Only a few Canadian universities are able to offer need-based scholarships to international undergraduate students, covering both tuition and living costs, commensurate with need. These are often renewable each year, provided the student maintains scholarship standing.

The Canadian government student loan program is only available to Canadian citizens and permanent residents. U.S. citizens with U.S. Stafford or Plus loans can apply these to study programs in Canada, provided the Canadian institution is recognized by the U.S. Federal Department of Education and has a Title IV code. In general, Canadian universities do not offer institution-based loans to international students.

International students intending to study in Canada for longer than six months are required to apply for a study permit (student visa). Students may apply for the study permit as soon as they receive an offer of admission from their Canadian school. Additionally, a temporary resident visa is required for nationals of certain countries. Residents of a number of countries must also undergo a medical examination before they can enter Canada.

Details of all these requirements can be found at the Citizenship and Immigration Canada website (www.cic.gc.ca). Application forms are available online and should be submitted together with supporting documentation and application fees to the nearest Canadian Embassy, Consulate, or High Commission.

Some universities allow international students to participate in work-study programs, which provide a wage subsidy to campus employers willing to hire students. Typical opportunities might include working at university food-service outlets, libraries, bookstores, or as assistants to faculty or staff on special projects.

The Government of Canada

Association of Universities and Colleges of Canada

I love this website and have been using it for years with my students. I originally bought products through Wintergreen Orchard House and appreciated having key facts at my fingertips when advising students. Your site is easy to access and offers a wide array of topics I need as a busy college counselor.

CollegeXpress has provided me with tips that were for college students, but as a high school junior, they were still very useful. Not only that, it also gave me an idea of what to expect when it comes to going to college or already being in college. I want to say thank you to CollegeXpress, and I hope you continue the wonderful tips until I hopefully get into college and throughout my college journey.