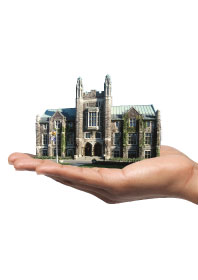 Worried about being just another freshman face in the crowd? Well, don't be! There are plenty of ways to find your niche at even the biggest flagship state universities.

Worried about being just another freshman face in the crowd? Well, don’t be! There are plenty of ways to find your niche at even the biggest flagship state universities.

You know the schools we’re talking about here: The ones where campuses have multiple ZIP codes. The ones where the student body could fill a small country. The ones with lecture halls so big you can fit your house . . . maybe your neighbor’s house too.

Many state schools have a massive student body and an equally sprawling campus. It can be daunting for any student to switch from the manageable hallways of high school, full of people you’ve known for years, to the multi-building campuses of large public universities, populated by thousands of freshmen just as lost as you are.

Students considering these schools may think they’ll be just a number in a school’s record books. While there is reason behind the concern—those big freshman year lecture halls are practically inevitable—all it takes is a little knowledge and gumption for a student to create small, accessible communities within the large population at these schools.

There is an endless array of classes, clubs, resources, and other extracurricular activities at public schools, and if you’re armed with this knowledge, you can make a big school work in your favor.

Acclimating to campus often begins before you even start classes, during orientation. Denise Rode, Director of Orientation and Coordinator of First-Year Connections at Northern Illinois University, says the main goal of orientation is to connect students with any and all resources that will lead to their success.

“I believe that orientation is a process rather than an event of one to three days,” she says, adding that Northern Illinois also hosts a family orientation to keep parents involved. “One of the key philosophies that underlies our program is that for students to be successful, it really is a partnership.”

So how can students forge the partnerships essential to their success at a large university? It’s all about being proactive, and using what each school has to offer. Rode believes that the best first step is getting involved in the residence hall, then growing from there.

Paul Palian, Director, Media & Public Relations at NIU, is still friends with buddies he met his freshman year—25 years ago.

“I still have a group of about 10–15 friends. We get together every year and do something,” he says. “These friendships last a lifetime; you can’t underestimate the first couple weeks of campus interaction. As you grow in the university and gain confidence, it’s almost a multiplier effect where you really start to feel at home and that this is your family.”

Lydia O’Dell, Executive Director and founder of DegreeMap, works with high school students to help them apply to college, find scholarships, and help them work on ways to make themselves more marketable for potential schools. She is also an advocate of getting involved on your floor. A graduate of the University of Utah, she worked with career counselors to discover what she wanted to do for a living. Turns out, she wanted to do what they did: help students find their niche at college and in their careers.

“The first thing to do is to really interact with that resident advisor, attend the meetings, and help with the various floor programs,” she says. “All of a sudden, [the student will] have a whole hall of familiar faces.”

O’Dell, located in North Carolina, says most of her students are programmed to enter the large state schools, such as the University of North Carolina, North Carolina State, and Appalachian State. Regardless, she addresses some fears, including large lecture halls, roommates, and feeling they’re “being swallowed whole.”

Another valid fear is having a short amount of time between classes, combined with classes on opposites ends of an expansive campus.

“Go to the key places you know you’ll go to, like the library, cafeteria, and academic buildings,” or anywhere you find a “comfort spot” for studying or hanging out. O’Dell says it’s important for students to familiarize themselves with routes too; figure out not just where buildings are but also the most efficient ways to get between them.

For many, it’s the classes themselves that are intimidating: large lecture halls, hundreds of students, and a lack of personal attention to individual students. Fortunately, most big universities try to make the massive general education lecture classes less scary.

At Arizona State University, freshmen are put into “cohort” classes with only 19 students. The class only meets once a week for one hour, but each course is taught by a staff member or upperclassman with a goal to continuously orient freshmen students and help them meet other people in their majors (or, for undecided students, meet other freshmen exploring their options).

Tim Desch is the Assistant Dean for Undergraduate Admissions at the W.P. Carey School of Business at ASU. “What we try to do is create a community that helps them as they’re going through, so the size of the university is not limiting, intimidating, or a negative factor for them,” he says. And with over 72,000 students enrolled at ASU, that’s very necessary.

O’Dell has a few tips for those who may be intimidated by a large class size: sit up front, remove all distractions, and go “old school” by taking only a pad of paper and a pen, because even a laptop can be distracting. Also, connect with teaching assistants (TAs) to get more personalized attention; if you ever struggle in a particular class, they can vouch for you after they see you putting in the effort. You can also take advantage of professors’ office hours, a great way to get extra help and differentiate yourself.

Finally, if you’re a member of the school’s honors program, you may have instant access to smaller classes and living communities, giving you a chance to bond in the context of the larger university.

Not so surprisingly, campus communities are often grounded in extracurricular activities. Caroline Radaj graduated from the University of Wisconsin—Madison in 2012, and says she met most of her friends through student organizations.

“Don’t pass up an opportunity you might have—even if you just have a remote interest in it—because it could lead to something huge,” Radaj says, adding that freshmen need to pay attention to their surroundings: students post information on walls and bulletin boards on anything from social events to club meetings.

Desch also recommends finding a campus job. “A lot of our students work here,” he says. “We do find that if a student gets a part-time job on campus . . . that becomes their small community as well.”

The important thing is for students to seek help if they need it. “The student has to know they have to ask for help; at a large university, no one is going to know [if you’re having issues], because they can’t,” O’Dell says—it’s impossible for universities to track every action of its students.

Yet, the benefits of a large university make the need to be proactive about finding your college community worth it: student diversity, varied and unique courses, and an abundance of campus resources.

“I truly believe that on a large campus, there’s something for everyone, but the students have to take initiative,” Rode says. “Come to a large campus ready to engage with the university. . . . Some of the students who struggle the most are those who have difficulty leaving [previous] identities behind. Be open to different experiences, stay connected, and don’t be afraid to get out of your comfort zone.”

For Radaj, it’s all about taking risks and exploring as many options as possible. “You’re doing a disadvantage to yourself by not expanding your horizons. [Being here] has given me a whole range of opportunities that I would have never been able to learn without being at a larger university.”

CollegeXpress helped in my journey by comparing multiple colleges for my final decision. While looking at different colleges, I was able to compare the tuition expenses and that landed me with the college that I’m currently enrolled in, Western Kentucky University. Thank you!