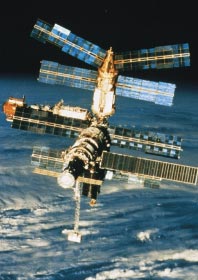 Labs at the Edge of the Final Frontier

"All the world's a lab to the inquiring mind."

“All the world’s a lab to the inquiring mind.” — Martin H. Fisher, German-American Physician and Author

The cure for polio was discovered in a petri dish in the lab of Jonas Salk. Alexander Fleming’s discovery of penicillin, which completely revolutionized modern medicine, had a similar origin—though it was completely on accident. Even Dr. Frankenstein’s monster was jolted to life in the fictional laboratory of Mary Shelley’s novel. In the lab, learning becomes doing and theory becomes application. It’s where the real magic of science happens.

You probably have been in some sort of lab before, filled with scientific equipment, maybe a hurried scientist in a white coat or two. There are many types of labs: a physics lab might include a vacuum chamber, a biology lab might use chemicals, and a psychologist’s lab may employ one-way mirrors in order to observe human behavior. Simulation labs allow us to recreate certain conditions so we can learn how to cope and operate when we face these simulated environments in the real world. And there are few more exciting and cutting-edge labs out there than those involved in space flight and related sciences. So if you have an interest in exploring the edges of the sky and the space beyond—or you’re just intrigued by the science happening in these labs—read on.

Perhaps the grandest lab of all, the International Space Station has orbited the Earth at a rate of five miles per second since 1998, serving as a microgravity and space environment research lab conducting experiments in biology, physics, astronomy, meteorology, and more. Much of the work conducted on the ISS involves the design and testing of spacecraft systems and equipment to support missions to Mars and the Moon. Some of the research currently being conducted includes how to best grow plants in a microgravity environment, how human circadian rhythms are affected by the absence of a 24-hour cycle of light and dark, and even the effects of space on sperm.

Space exploration drives an incredible amount of research and addresses challenges far beyond structure and safety of spacecraft. The field of human factors psychology focuses on the interaction of humans and systems, a critical aspect of space travel.Labs that study this human/system interaction allow us to learn about potential challenges that will impact humans during space travel and prepare for them before launch, such as cultural implications when people of different nationalities share space.

The Mobile Extreme Environment Research Station (MEERS) is an example of just such a lab. Amazing things are happening in the humble 1976 Airstream Travel Trailer that sits in Embry-Riddle Aeronautical University’s Research Park, adjacent to the Daytona Beach campus. The MEERS Lab serves as a hands-on classroom and test bed where students develop and enhance the lab with new technologies. This controlled environment is used to simulate the types of challenges humans will face during extended space travel, like a mission to Mars. The lab is designed to study human interactions and the technology that will support such a mission. “One concern about the mission to Mars is the communication time delay,” says Dr. Jason Kring, professor of human factors psychology and faculty advisor on the project. Simulating that delay and how it affects the people on the mission will help prepare for the real thing. The team will also study team human performance, cultural challenges, and basic functionality of the lab.

Simulating weightlessness is another way to help prepare humans for space flight, and NASA’s “Vomit Comet” program is designed to do just that. The feeling of reduced gravity is accomplished in a specially outfitted aircraft that flies in parabolas (radical up and down motion—imagine a dolphin swimming and jumping). The rapid descent not only provides a feeling of weightlessness, it can also make those aboard feel quite ill, hence the nickname. Select students are chosen each year to participate and conduct experiments in the craft. Thanks to the Zero G Corporation, students aren’t the only ones who can take the ride of a lifetime; anyone willing to pay the $5,000 ticket can ride too.

Back in Earth’s atmosphere, professional pilots also use simulation labs to perfect flight performance. From the dawn of flight, the skies themselves have served as a lab for pilots, and stalls and spins have been among the “experiments” conducted overhead. But the ability to train in a safe environment that mimics potential conditions in the skies saves money, is less risky, and can dramatically improve reactions to dangerous situations. Flight simulators serve this purpose and can be remarkably realistic. Full-motion simulators allow users to experience every aspect of flight, from the 360-degree visual displays to the effects of acceleration. These devices are so valuable to flight training that students earn actual flight time when training in them.

Pilots use other labs to perfect their skills as well. The threat of hypoxia is a serious one for pilots who spend their time at high altitudes. The military first introduced this kind of training, and its use has expanded to colleges. Students in a hypoxia lab experience a loss of oxygen, and the resulting effects are monitored by instructors and medical personnel in oxygen masks. As oxygen is depleted, a hypoxic environment is created that mimics the oxygen levels found at an altitude of 30,000 feet, and participants are asked to perform specific cognitive, motor, and flight tasks while instructors observe their performance, such as color discrimination, simple math problems, block puzzles, and peripheral vision tests. Experiencing hypoxia and understanding its effects prepare pilots for this phenomenon should they ever encounter it.

A little-known lab that operates beneath Earth’s surface is also a big player when it comes to space exploration: the NASA Extreme Environment Mission Operations (NEEMO) Lab. According to NASA’s website, NEEMO is “a NASA analog mission that sends groups of astronauts, engineers, and scientists to live in Aquarius, the world’s only undersea research station, for up to three weeks at a time. The Aquarius habitat and its surroundings provide a convincing analog for space exploration.”

Owned by the National Oceanic and Atmospheric Administration and located in the Florida Keys, the habitat is an extreme environment that can help prepare astronauts for the challenges of space. Aquanauts experience some of what they would face as astronauts, such as variations in gravity, simulated space walks, and an alien and hostile environment.

As you explore the skies to the seas and everywhere in between, you’ll see there are as many types of labs as there are technological challenges to overcome, diseases to cure, and exotic places to explore. As technology advances, labs will too. Scientists of tomorrow, strap yourselves in for an exciting ride. Society is relying on you to solve extraordinary problems, and while classrooms will help us understand those problems, the solutions will undoubtedly be discovered in those magic spaces—labs.

CollegeXpress helped me find the school I am currently attending by consistently sending me emails of other schools. This allowed me to do research on other schools as well as the one I am in now!

I used CollegeXpress to search for colleges. It helped me narrow down the schools on the West Coast and which schools had Construction Engineering programs. I made my decision to go to OSU and I am so excited about it.

As I transition to furthering my education, I can say with certainty that it simply wouldn’t be possible without the help of generous organizations such as CollegeXpress. Those who initially founded CX had no idea their platform would give a plethora of information to a first-generation homeless kid native to the ghettos of over half a dozen states. Everyone at CX and Carnegie Dartlet gave me a chance at a future when the statistics said I had none. And for that, I thank them.