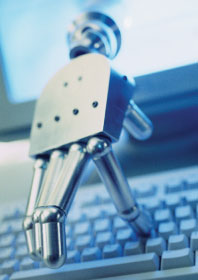 What will the future bring? No one really knows. But as human knowledge continues to expand at an amazing rate, all kinds of new career paths are emerging. Thanks to developments in science, technology, health, and medicine, today’s students can look forward to careers not even dreamt of in the past.

“Science and technology are ever changing,” says Dr. David Luzzi, Executive Director of the Strategic Security Initiative at Northeastern University in Boston, Massachusetts. “This has been true since the dawn of man. What is different today is that the pace of change has never been faster.” Accordingly, the job market is evolving just as rapidly. Here is a look at some of the most promising developments leading to new career possibilities.

Biology and numbers. That’s the essence of bioinformatics. This emerging field applies computational tools in the analysis of biological, medical, behavioral, or health data. For example, researchers trying to develop a new type of gene therapy might use complex mathematical models to predict the results of manipulating specific genetic combinations.

“In recent years advances in DNA sequencing technology have greatly increased the amount of sequence available to biologists,” says Eliot Bush, a professor at Harvey Mudd College in Claremont, California, who oversees the school’s new major in computational biology. “Understanding and interpreting this data has become a key part of biology.”

Bush points out that computational methods are becoming even more vital to many areas of biological research. They include genomics, molecular modeling, structural biology, ecology, evolutionary biology, neurobiology, and systems biology. In the future, all these fields will rely on professionals who are trained in both biological and analytical concepts.

Robots have long been a feature of TV and movies, but they’re a growing part of real life too. Advances in electronics, software, and other areas are making it possible for robots to perform an amazing array of functions. In factories, robotic devices help assemble cars or manufacture tiny electronic components. In hospitals, robots deliver medical supplies and assist in performing surgeries. And in nuclear power plants, robots carry out tasks that would be too dangerous for human beings.

According to the Robotics Industries Association, nearly a quarter of a million robots now operate in American factories, with that figure expected to increase rapidly in the years ahead. Add to that the expanding use of robots in agriculture, health care, the military, and elsewhere, and the future brims with excitement.

As robotic devices become even more common, the demand for those who design and work with them will surely grow. Promising career possibilities will include roles for engineers, technicians, software developers, and other specialists.

Who would’ve thought printing could be cool again? The newest thing in printing is three-dimensional objects. Through this process, the key details about an object are converted to digital information, and then the subsequent data guides a special device in creating the object in its entirety—in 3D. By layering tiny bits of metal, plastic, or other material, the printer slowly builds a new version of what had previously been only data.

“Communicating ideas from within this magical scenario is becoming increasingly easier,” says Erol Gunduz, who teaches related courses at New York University. “There are now systems in place which can translate 3D data into perfect representations of desired solutions.”

As this technology evolves, its use is expanding into a variety of applications, from creating medical devices to fashioning automobile parts. In the process, the manufacturing world is being transformed in ways that will lead to new career areas. In what is often called additive manufacturing (where the 3D printing process supplements or replaces traditional methods), specialists will be needed to develop new applications for this revolutionary process. Positions in areas ranging from engineering to product design will offer a host of career opportunities.

With the world’s increasing dependence on electronic communication, we’re all vulnerable to attacks on the systems that support the exchange of information. A virus on your home computer is bad enough, but what about an event that shuts down the power grid of a multi-state region? Or an instance when a manufacturer steals information from another company and then uses it to produce competitive products? Or the theft of secret information from the Pentagon’s computers?

According to the U.S. Department of Homeland Security, threats such as cyber theft rings, hackers, and data breaches pose challenges that change in number and sophistication on a daily basis. To help protect the nation’s cyberspace, DHS employs professionals to carry out duties in areas such as cyber incident response, intelligence and investigation, cyber risk and strategic analysis, systems engineering, digital forensics, and even “white hat” hackers, or people who try to beat hackers to the punch by figuring out how they might compromise a system.

These jobs can be found everywhere, from large corporations to smaller security firms. Demand for cybersecurity specialists may grow substantially as this becomes a priority for more organizations. Those who have studied in a field related to information technology (IT) will be best prepared to take advantage of this trend from a career perspective.

For some emerging careers, the motivation is not so much the development of new technology as it is a new understanding of old knowledge. That’s the case in some areas of health and medicine, where practices long considered out of the mainstream are gaining new credibility.

Over centuries, people have developed a wide variety of strategies for healing the sick or promoting wellness. In modern times, many of those approaches have lost credibility or failed to gain acceptance, as the medical community pioneered new approaches based on established scientific principles. In recent years, however, researchers and medical professionals have begun to place more credence in some aspects of alternative medicine.

For example, the use of acupuncture has not only become increasingly popular, but it is also more widely recognized within the overall medical community. Similarly, some types of herbal medicine have been proven to have real therapeutic value.

Looking ahead, career options are expected to broaden for those interested in providing treatments or services such as nutrition counseling, massage therapy, relaxation training, acupuncture, and biofeedback. As new research demonstrates the validity of approaches previously considered outside the scope of recognized medical practice, even more career options may be found in integrative medicine.

Bigger is not necessarily better. In fact just the opposite may be true with cutting-edge developments in miniaturization, where the ability to make functional objects smaller is paramount.

In recent decades, the ability to shrink the size of components was made possible by the development of cell phones and other portable electronic devices. But that is only the start. Today, miniaturization is becoming commonplace.

At Carnegie Mellon University in Pittsburgh, Pennsylvania, engineers are developing electronically active medical devices that can be implanted in the body by swallowing a pill. That project typifies this area of expanding knowledge, where researchers in medicine, the biological sciences, and other fields are making it possible for the smallest of devices to be effective.

Other examples include the development of camera-bearing drones that look like hummingbirds, small satellites that cost less to place in orbit than ordinary hardware, and hearing aids that are less intrusive. From military hardware to consumer products, efforts to render smaller objects are bringing impressive results. And just as with other technological advancements, new career prospects can be anticipated for engineers, technicians, researchers, and other specialists.

These are just some of the areas where advancing technology and new levels of knowledge are bringing promising career possibilities. Many others are emerging, and more loom on the horizon.

The key to breaking into any field, of course, is obtaining the right educational credentials. To get started, check with the college of your choice. Look for programs that seem to be a match for your academic strengths and possible career interests, and go from there. Once you get started, who knows what your future will bring?

“The important takeaway message is that there will always be a great need for professionals educated in science, mathematics, and engineering,” says Northeastern’s Luzzi. “If you study any of the many fields in these domains and if you’re able to work well in a team, your future success will be assured.”