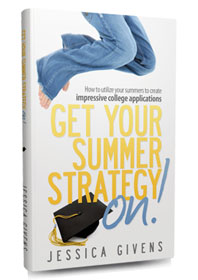 For the past 15 years, Jessica Givens, founder of All-In-One Academics, has immersed herself in the world of college admission. By working hand-in-hand with students, reviewing countless admission essays, and constructing diverse college applications, she has developed a keen understanding of how to impress college admission boards.

In her new book, Get Your Summer Strategy On!, Jessica writes that summers offer a golden opportunity for students to delve into personal or community interests—and in today’s cutthroat college admission environment, summer activities can elevate an application over others with similar grades and test scores.

In this interview, Jessica offers some tips for students hoping to make the most of their summer.

Do you find it’s mostly parents or students taking the lead in planning summer activities?

It depends. When I’m working with ambitious kids who are interested and motivated about their future, they seem to be more proactive and they’re definitely looking for things on their own. We’ve had kids who created their own opportunities: people who started astronomy clubs over the summer and got their friends interested in looking at the stars. It’s nothing formal, but it’s them taking an interest and building on it.

And it depends on the program. I’ve found that when you introduce kids to the concept of internships, students are more excited than when we just talk about taking classes. Kids sometimes go to college just because it’s the next logical step, when it should be the portal to your career path. Summer activities are separate from academics, and if they can spend the summers doing something fun and productive, they’re generally excited about it.

In your book, you write about how students can use their summers to help “focus” their college applications. What are some ways for students to demonstrate their passion over the summer?

I think that’s the most important takeaway from any interaction I have with students about college admission. Colleges want a well-rounded superstar, but they also want students who identify a passion ahead of time. If you’re applying to major in biology, your activities should corroborate your interest—I tell them to work on a research project, or even create one on their own. I want them to be out there demonstrating a real interest.

I have a student who’s passionate about fishing, and wants to work in the fishing industry and go to a school that’s strong in marine biology. So we have him doing a program going out on boats and collecting samples, and everything we do demonstrates that interest in marine biology.

If you’ve seen some of the statistics coming out on acceptance rates, it can be terrifying. If everybody on paper is good, you can see a clear difference in acceptance rates for students who have a “Melba Toast,” or bland, record of experience. We work with one girl who’s really passionate about biblical studies, and she’s read different versions of the Bible and written about them. And she might look the same on paper as other students, but she’s getting in where others aren’t because she has a demonstrable passion that shows in her application.

What tips do you have to parents or students evaluating an expensive summer program and trying to figure out if it’s worth the cost?

Obviously it relates to how much expendable income the parents have. But if it’s something that requires letters of recommendation from teachers, the application process is selective, if it’s at a university that they would like to attend or it really matches their interest, I really encourage them to do it.

I don’t think it has to be expensive to make use of your summers. I had one student who did a summer program at Stanford, but it wasn’t as interesting as when he developed the plans for an ancient war machine that he constructed at home. The Stanford program allowed him to study number theory and it was certainly a good experience, but what was really interesting to him was that, with some wonder and some screws, he constructed an ancient catapult.

What are some options outside of formal courses and summer programs?

There are several. Serve.gov is supported by the U.S. government and it has a lot of plans and blueprints for starting your own volunteer programs—and it’s free. Figure out some interest you have in the community and start your own service project. It shows that you’re willing to put time in to help others, and develop skills to motivate and manage other people. You are changing yourself as an individual when you’re helping other people. Any time you’re applying to colleges and you can show how you took initiative, it shows you’re different.

Other kids start small businesses, or create their own summer science research projects. You should definitely contact teachers to see if they’ve heard of any local competitions. Look at summer as a three-month period: You can allocate time to still have that summer job, still have time at the pool, but also do something productive.

Something I hadn’t heard of until I started working with students is the Congressional Service Award. If students start working on it over the summer, especially if they start early, that can be really exciting. It’s something that you can work towards every summer.

When I was in high school, I volunteered at a humane horse ranch and thought I was really incredible for spending a few Friday afternoons with retired horses. But today kids have so many opportunities that you have to do something more targeted. You need to have more than just accumulated hours—they have to be targeted towards a certain goal. Start working with a specific group and if kids are really active, they will find out what their passions are.

At what age should students start filling summers with activities?

The congressional service award allows you to start at 13 and a half, which is usually the summer after eighth grade. If they’re working towards that goal, I encourage students to start before middle school because it’s nice to have that completed by the end of junior year.

When you’re younger is the time to do some sampling. There are programs now even for middle schoolers—science programs, writing programs—that expose kids to what it means to be in a particular field of study. I have students that are really passionate about something, and then around junior year decide they don’t really want to be a doctor; they want to be an engineer. I just say, “Okay, let’s make the next project about that, and you can write your essay about the process of making the discovery.”

Nobody expects you at 15 years old to have that all hammered out. What you want to show is you’re taking an active role in exploring what your interests are. You can talk about the growth that comes from trying things out and finding things that aren’t the right match for you.

I’m glad I tried so many different things and I’m so happy with what I do now. And it came out of exploring what really suited my personality, my mind, and my abilities. You do your best to plan and to figure out what interests you, and no one’s going to hold you to what you wanted to do when you were 14.