Multnomah University, founded in 1936, is a private, Christian University and seminary. Its 25-acre campus is located in Portland, Oregon. 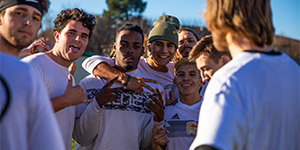 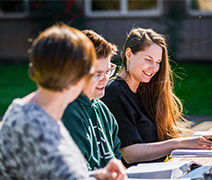 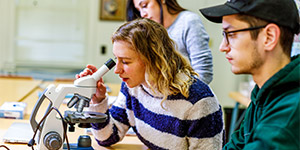 "We can have an impact for Christ."

The best way to learn about Multnomah University is by hearing from our students and alumni. Countless MU graduates are serving Jesus with their life’s work. So can you.

“We can have an impact for Christ”
Lindsey Weaver dreams of taking her knack for business to a nonprofit after graduation. In the meantime, she’s getting plenty of credible experience. The Business major recently interned at a nonprofit that connects Italian ministries with overseas volunteers. As a project manager, she designed and coordinated two summer camp programs. “Being able to plan everything and see it come to fruition in Italy was the best,” she says.

Weaver also collaborated with a Portland nonprofit to create handbooks for the hundreds of volunteers who help provide free back-to-school clothes for local foster kids. “It’s really exciting to learn how we can have just as much of an impact for Christ in the marketplace as a pastor can in a church,” she says. “Being at MU has really helped me define what I want to do.”

Robinson is currently earning a master’s degree in Mathematics. He’s one step closer to his dream of becoming a professor at Stanford or the University of Oxford—a dream that took flight under the guidance of MU’s faculty.

“MU professors are premier scholars in their fields,” he says. “They’re brilliant and qualified, but I learned more from their lives than from their classes. The people here taught me how to love Jesus.”

Perry had an opportunity to share that love when she volunteered with her classmates in Rwanda. After graduation, she scored an internship with Hope Teams International, where she’s currently learning how to run a nonprofit and manage short-term mission teams.

“I’m willing to go anywhere in the world God takes me,” Perry says. “Being at MU was an opportunity for me to hold out my faith to Him and define what I believe. It helped me become my own person.”

“You’ll be a better and stronger person”
When Erik Mendoza came to MU to play basketball, he was worried the school’s size would limit him. Instead he grew by leaps and bounds. Mendoza shared the Gospel on mission trips to the Czech Republic and Taiwan, and he volunteered weekly with his teammates at a local children’s hospital. At MU, he emerged as a leader while serving as team captain.

“Those experiences made the basketball team more than a basketball team,” says the Psychology major. “If you stick around, you’ll be a better and stronger person.”

After graduation, Mendoza was hired as a retail marketing specialist by one of the world’s top sports brands, Adidas. “MU challenged me and gave me the ability to perform at a high level,” he says. “It also instilled a genuine love for people.”

Read more of our student stories at multnomah.edu/studentstories.