Keep Students' Eyes on the Prize with Summers in Sciences

When the first-ever White House Science Fair this past October invited middle and high school students to display their award-winning projects, it was no ordinary science competition. There were no judges and no prizes, and attendees included President Obama, high-ranking policy makers, Nobel laureates—even Bill Nye the Science Guy.

Among the honorees was Erika DeBenedictis, a high school senior from Albuquerque, New Mexico, who won the 2010 grand prize of $100,000 at the prestigious Intel Science Talent Search (STS) for her project developing a software navigation system to improve spacecraft travel through the solar system. But before she won the award often described as the junior Nobel Prize, Erika honed her research skills at the Summer Science Program, a residential summer program in California and New Mexico in which gifted high school students complete a challenging, hands-on project in celestial mechanics. 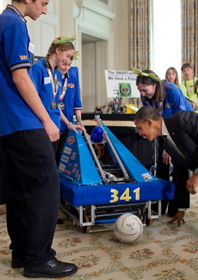 Many of the finalists and semi-finalists at Intel STS and other highly regarded science fairs developed projects at summer programs. Since its founding in 1983, the Research Science Institute on the MIT campus boasts six Intel STS winners, and in 2003 and 2007 RSI participants took home the top prize at both STS and the Siemens Competition in Math & Science.

For students interested in high-level science research, summer programs at colleges and universities offer access to a community of scientists and advanced laboratory equipment not available at their home schools.

Because the science curricula at most high schools are not project-based, summer programs provide invaluable experience developing projects with real-world applications. Program participants may join ongoing projects conducted by professors, undergraduates, and grad students, often with opportunities to contribute their own specialized research.

The most prominent summer research programs enroll students entering their senior year in high school, with applications usually due the previous fall. The admissions process is often as cutthroat as applying to selective colleges: Summer Science Program received more than 530 applications for about 70 openings in 2010. Expect to be evaluated on your grades, standardized test scores, essays, and teacher recommendations.

Outside of formal summer programs, you may be able to arrange a research opportunity with an individual professor or scientist, especially if you live near a university or research facility. Search websites for projects that interest you and email researchers to arrange an on-site or virtual mentorship. Be sure to highlight any advanced science courses you’ve taken and demonstrate a familiarity with the researchers’ work.

Have any of our readers attended summer science programs? Anyone plan on applying for next summer? Let us know in the comments!

President Barack Obama examines the inner workings of a soccer-playing robot, one of the projects on display in the first White House Science Fair on October 18, 2010. (Photo by Pete Souza/courtesy whitehouse.gov)