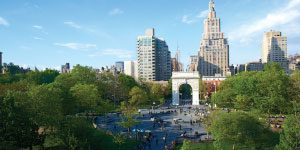 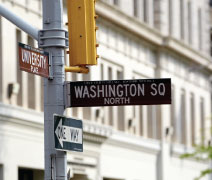 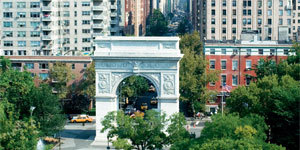 New York, New York, is the world capital of finance, communication, and culture.

New York, New York, is one of the most influential cities in the world. The capital of finance, communication, and culture, the city offers the best in theater, dance, music, film, museums, and galleries. New York is a city of distinct neighborhoods such as Little Italy, Chinatown, Wall Street, Times Square, SoHo, and the South Street Seaport. NYU is located in Greenwich Village, a calm oasis in an energetic city. Each tree-lined street winds its way in an unpredictable fashion, giving the neighborhood an old-world flavor.

FINANCIAL AID: Scholarships and grants are limited for non-US residents and permanent residents. To be eligible, international students must complete the CSS/PROFILE.

TEST SCORE REQUIREMENTS: Applicants may submit a variety of test results to apply. International students whose native language is not English must submit an English-language proficiency test. Visit admissions.nyu.edu for details.

It is comprised of distinct neighborhoods like Little Italy, Chinatown, and SoHo. NYU’s neighborhood is Greenwich Village, a calm oasis in an energetic city.

With its New York, Abu Dhabi, and Shanghai campuses and academic centers worldwide, NYU is a truly global university.

NYU Abu Dhabi
NYU Abu Dhabi blends global academic experiences with a liberal arts, sciences, and engineering curriculum. In Abu Dhabi, one of the world’s most dynamic cities, you will conduct research, volunteer, intern, and travel in the region and throughout NYU’s global network.

Admission
Admission to NYU is highly selective. The Admissions Committee evaluates each application based on many factors, including your academic record, a combination of standardized test scores, letters of evaluation, and your personal statements and essays. The committee also reviews your talents, personal attributes, and goals. For details, visit admissions.nyu.edu.