There is an interesting debate going on in college athletics right now, and it’s all about money. I was sent an article the other day regarding this issue and was shocked to find that there are many layers to this discussion.

Just to illustrate the depth of the topic and how current it is, I typed in "college athle" into Google and this is what popped up: 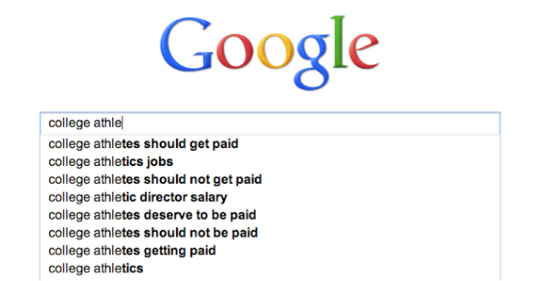 Who would have thought?!

Needless to say, I'm totally hooked after finding there were so many facets to this issue. So for my next few blogs, I will dive into the areas where money is permeating into the college athletic industry at the moment:

Where do you fall on this debate?

I think there are valid points to both sides, but what it comes down to (for me) is that the college experience shouldn’t be tainted with money. There are so many talented individuals who aren’t on the field who don’t even receive scholarships to go to school; this money is much better spent elsewhere instead of on the same people over and over again who already have their college education, books, and room and board paid for.

What is your position? Should college athletes be given a salary for playing?

What is the NAIA?