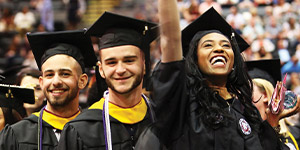 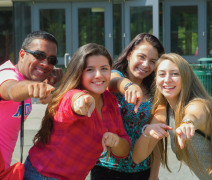 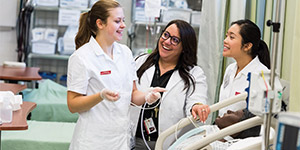 College-bound students and their parents are always looking for an academic environment that offers the best fit for the student and the best value for their tuition dollars.

When you come to Molloy, you stay at Molloy.

Our retention rate is one of the best in the country.

When you stay at Molloy, you graduate from Molloy.
Our graduation rate is among the best in the region.

When you graduate from Molloy, you get a good-paying job in your chosen field.
Our graduates’ salaries are $10,000 higher than our competitors’ on average.

Molloy College continues to earn national honors
Last year, Molloy was ranked the #18 “value added” college in the US by the Wall Street Journal, arguably the nation’s premier financial publication. Additionally, in December, Newsday produced an enrollment overview of the many private colleges in our region. While most of our competitors struggled in the 2012–2017 period, Molloy “saw the largest increase, rising by more than 11%.” Molloy has also earned other honors, including being ranked the #10 “best value” among Catholic colleges nationwide by College Values Online.

“We are dedicated to providing our students with the best possible value. If you come to Molloy, you graduate with a job in your field at a salary that’s significantly higher than average.”
— Drew Bogner, PhD
President, Molloy College

Investing in student success
“We invest in student success, and we challenge our students to succeed. Molloy students are committed to a value system that stresses a strong work ethic, resiliency, professionalism, and leadership,” says President Bogner. “This is why they graduate and why they get hired. We reach beyond the classroom and educate the entire person.”

A small student-faculty ratio of 10:1 means students are more than a number to their professors, who provide input and guidance that enable students to “live their story” and pursue their dreams.

Drawing on the strength of the New York metropolitan region
One of Molloy’s many strengths is its proximity to New York City. Nestled in the Long Island suburbs just minutes from Manhattan, Molloy takes advantage of the New York City metro region to provide its students with the highest-quality internships and clinical placements. The largest metropolitan region in the country, the NYC metro area is a world leader in health care, business and finance, education, criminal justice, performing arts, and much, much more.

What’s new
Founded in 1955 by the Sisters of Saint Dominic in Amityville, New York, and home to approximately 4,900 undergraduate and graduate students, Molloy recently opened its new facility at 50 Broadway in Lower Manhattan. The space serves as the new home of the Molloy/CAP21 BFA in Musical Theatre and also hosts other academic programs and special events. Additionally, Molloy recently opened its newest residence hall, the College’s third, on its main campus on Long Island.

The College continues to expand its flexible learning options for many of its programs so that students can take night, weekend, hybrid, or online classes. Some of Molloy’s newer offerings include an online MBA as well as a new degree-completion program that will enable returning students to easily complete their undergraduate degrees. Additionally, Molloy recently received New York State Education Department approval to offer two new advanced certificate programs in the School of Education: School Building Leadership and Gifted Education.