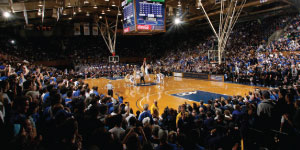 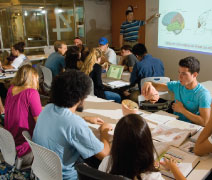 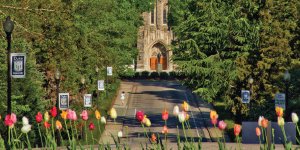 DUKE LIBRARIES, one of the nation’s top 10 private research library systems, comprise six libraries across East and West Campuses, including the Rubenstein Rare Book & Manuscript Library and the separately administered libraries serving the Schools of Business, Divinity, Law, and Medicine.

SARAH P. DUKE GARDENS are 55 acres of landscaped and woodland gardens in the heart of Duke’s West Campus. Each year, more than 300,000 visitors enjoy the gardens’ five miles of walkways and over 8,000 species and varieties of plants.

THE NASHER MUSEUM OF ART opened in 2005 and is a major center for the arts on campus. The museum serves the University, Research Triangle, and surrounding region with an ambitious schedule of exhibitions and educational programs.

THE DUKE SMART HOME is a research-based approach to smart living sponsored by the Pratt School of Engineering. Primarily focused on undergraduates, the program encourages students from different academic disciplines to form teams and explore smart ways to use technology in the home.

DUKE FOREST covers 7,200 acres in separate areas of Durham and nearby counties and serves as a natural outdoor laboratory for Duke and neighboring universities. The forest is used for research, protecting wildlife and rare plant species, and studying timber management practices. It’s also a popular place to walk or run.

THE RICHARD H. BRODHEAD CENTER FOR CAMPUS LIFE, which opened in fall 2016, is a gathering spot for informal meetings, relaxing, and dining.

DUKE LEMUR CENTER is home to the world’s largest colony of endangered primates, including more than 200 lemurs, bush babies, and lorises.

CAMERON INDOOR STADIUM is considered the crown jewel of college basketball. Cameron was renovated in the late 1980s and underwent a series of improvements in 2009 to enhance the game-day experience.

DUKE PERFORMANCES hosts 60–70 professional performing arts events each year, including music, theater, dance, and talks on campus. Many events are held in the Rubenstein Arts Center and Page Auditorium, with others held at Reynolds Industries Theater, Baldwin Auditorium, and the Nelson Music Room.

THE RUBENSTEIN ARTS CENTER is an over 70,000-sq. ft. hub for artistic production at Duke and in the Triangle. The building includes flexible multipurpose studios, seminar classrooms, a makerspace with over a dozen 3D printers, a film screen theater, and a studio theater.

BRYAN CENTER is the hub of student activity. It serves as an expanded student union and contains theaters, restaurants, a coffeehouse, book and merchandise stores, an information desk, a post office, and more.

DUKE CHAPEL, an iconic symbol of the University, is at the center of the Gothic West Campus. Built in 1932, the chapel is dominated by a 210-foot tower housing a 50-bell carillon, which is played at the end of each workday.

MARY LOU WILLIAMS CENTER FOR BLACK CULTURE, established in 1983, features an art gallery, performance spaces, a library, and a lounge. The center sponsors speakers and events on race, ethnicity, and social difference.

PAGE AUDITORIUM is Duke’s largest theater, with a capacity of 1,200 seats. It has been the site of thousands of performances and lectures since its opening in 1930, including speeches by Senator John F. Kennedy and the Reverend Martin Luther King Jr.

DUKE SPORTS HALL OF FAME showcases all of Duke’s teams in a public museum featuring video, audio, trophy cases, and a theater.

Duke University is an institution with the ambition and boldness to make a global impact in our new century. The student-driven campus is located in the heart of one of America’s most fascinating and vibrant areas: the city of Durham, in North Carolina’s Research Triangle region. With a unique cultural identity, this midsize city is known for its innovative research, nationally recognized cuisine, rich history, and vibrant arts community. As diverse and creative as their community is, Duke students embrace learning and collaboration through an impressive range of academic, cultural, and service experiences. Students who aspire to a Duke education tend to be ambitious, curious students who pursue challenges, are unafraid to question convention, and seek out innovation.

With over 50 million possible paths through our curriculum, Duke provides limitless intellectual opportunities for our students to develop their minds and enrich themselves as individuals. Through programs like Focus and Bass Connections, Duke provides every undergraduate easy access to faculty, research, and independent study as well as service and learning opportunities around the world. We encourage students to explore all their interests—almost 85% of Duke students graduate with more than a single major, and our 23 multidisciplinary certificates are particularly popular options. Wide-ranging, proactive support services assist students in their academic pursuits, including pre-professional and career advising.

While they’re engaged with their coursework, Duke students also have plenty of space for imagination and exploration through service and study abroad opportunities. DukeEngage—a fully funded, immersive summer service program—allows students to address critical human needs and provide meaningful assistance to communities in the United States and abroad. Each year, students participate in a variety of civic engagement activities such as environmental advocacy, community outreach, global health, education, social entrepreneurship, and more.

A private institution tracing its roots to 1838, Duke enrolls approximately 6,640 undergraduate and 9,350 graduate students who represent every state in the nation and over 80 countries around the world. The University continues to evolve in response to the changing needs of the world its graduates serve.

Life at Duke
Duke’s home campus in Durham, North Carolina, a city of more than 270,000 people, is comprised of 250+ buildings on 8,532 acres, including 7,044 acres of the Duke Forest (see sidebar). The campus is divided into three main areas: West and East Campuses and the Medical Center, which are all connected via a free bus service.

Duke students often refer to the campus as “the Gothic Wonderland,” a nickname referring to the Collegiate Gothic architecture of West Campus. Much of the campus was designed by Julian Abele, one of the first prominent African American architects. In 2016, Travel + Leisure listed Duke among the most beautiful college campuses in the United States.

Students are required to live on campus for the first three years of undergraduate life, fostering a close-knit campus community. Accordingly, approximately 82% of undergraduates live on campus in housing that caters to students’ many varied interests, from learning communities to first-year student clusters. All housing on West is organized into about 80 “houses”—sections of residence halls or clusters of apartments, each with its own unique identity—to which students can return each year.

More than 400 clubs and organizations spanning all manner of student passions, talents, and cultural backgrounds operate on Duke’s campus. These include numerous student government, special-interest, and service organizations. Over 75% of Duke students pursue service learning opportunities in Durham and around the world that advance the University’s mission of “knowledge in the service of society.” About 30% of undergraduate men and about 40% of undergraduate women participate in one of the 39 recognized Greek chapters at Duke.

Financial aid
Duke is committed to a need-blind admission policy for US citizens, permanent residents, and undocumented students, meaning it admits undergraduates without consideration of their families’ ability to pay tuition and other costs and meets 100% of students’ demonstrated financial need for four years. Over 50% of all Duke students receive some form of financial aid, including need-based, athletic, and merit aid. The average need-based grant is more than $50,000. For more information, visit financialaid.duke.edu.