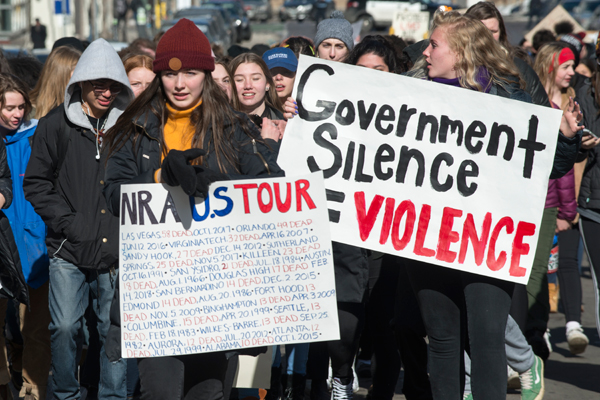 In the Aftermath of a School Shooting

With the extreme prevalence of gun violence and school shootings in the US, many students are afraid of what could happen when they step on their own school grounds.

On Wednesday, February 14, 2018, 17 people were killed by a 19-year-old former student armed with a semiautomatic rifle at Marjory Stoneman Douglas High School in Parkland, Florida. This attack, the 17th school shooting of the year, according to Everytown, has affected not only those involved but students across the country as well.

With the extreme prevalence of gun violence and school shootings in the US, many students are afraid of what could happen when they step on their own school grounds. “Before I left the house, my dad told me to not be the first one to leave if a fire alarm goes off,” said one Brentsville District High School senior in Nokesville, Virginia. Zoe Sampson, a junior at Brentsville, added, “I had a nightmare that we had a school shooting. I could wake up and tell myself it was just a dream, but there are people who cannot do that.”

With so many emotions following the attack, it is important to not keep them in. If you need help processing these events, talk to your friends, parents, teachers, and guidance counselors. And know that although the news is truly devastating and going to school may seem scary right now, this attack is being viewed as a turning point by many and an opportunity to invoke tremendous change.

Students at Marjory Stoneman Douglas have been turning their fear, confusion, and anger into action to help prevent future massacres. Their efforts began when they documented and posted videos of the shooting on the 14th, showing the true horrors to the rest of the world. While these videos are extremely unsettling—with students hiding from gunfire, police storming classrooms, and others fleeing to safety—they helped spark a more serious need for changes in gun control laws. These students, who have grown up in a media-centric world, have been maturely answering reporters’ questions, calling out congressional leaders, and using the event to create their own gun control movement.

Already there is widespread protest, with several walkouts and marches happening across the US. Students and families of Marjory Stoneman Douglas protested the capital in Tallahassee with tremendous support on February 21, and more teens stormed Washington, DC, the same day with hopes of effecting change.

On March 14, the Women’s March Youth EMPOWER group encouraged students and teachers to walk out of their schools at 10:00 am for 17 minutes—one minute for each of the victims in Parkland. Over 3,000 schools participated, according to EMPOWER. While there was some backlash, with some students receiving suspensions or detention for participating, there was an overwhelmingly positive response overall. It’s helpful to know that numerous colleges are not counting disciplinary action relating to social activism as a viable thing to hold against students in their admission decisions. The National Association for College Admission Counseling compiled a list of some of those colleges and universities that you can view here.

A nationwide protest, March for Our Lives, was held on March 24, and #NationalHighSchoolWalkout is being planned for April 20, the 19th anniversary of the Columbine Shooting, in protest of the lack of change in gun control laws since the attack almost two decades ago. In addition, other schools such as Patriot High School in Virginia have planned their own individual protests. If you want to plan one at your school, make sure to coordinate with your administration.

Related: Locked and Loaded: Guns on Campus and How College Life Is Changing

I used CollegeXpress to search for colleges. It helped me narrow down the schools on the West Coast and which schools had Construction Engineering programs. I made my decision to go to OSU and I am so excited about it.

I wanted a school that wasn't too far away from home and could provide me with a full-ride scholarship. CollegeXpress helped me put into perspective the money I had to pay to attend those schools, which ultimately drove me to choose to attend a community college first to get used to being in college before transferring to the University of Michigan–Ann Arbor, one of the colleges I was able to research further on CollegeXpress.

I'm a senior in high school, and CollegeXpress has helped me in so many ways this year in trying to navigate the process of deciding and committing to a university. The COVID-19 Student Resource Center has helped me many times with the most up-to-date and accurate information, along with financial aid and student life [advice]. During these uncertain times, CollegeXpress has been a great recourse to relieve the stress as a senior. Along with the COVID-19 Student Resource Center, I'm constantly using the extremely helpful tools off the site to aid me during this stressful process. Tools like the lists and rankings of universities have been the most beneficial. I've also used the site to receive expert advice on topics like financial aid. Finally, CollegeXpress has helped me easily apply for several scholarships. I'm thankful to be given the chance to win a scholarship to lessen the burden of my college debt.