Careers for People Who Want to Use Their Creativity

Being an accountant is great if you love numbers, but that's not everyone. If you're looking for a position geared toward the creative types, read on!

If you enjoyed art class, music lessons, or being in plays when you were in school, you were probably told that those activities wouldn't serve your future the same way math or science would. But as the modern workforce continues to change and grow, that isn’t so true anymore. There are countless careers for those who want to put their creativity to use.

This field doesn’t get demeaned as much as other creative industries, but there’s still the misconception that you're not really a professional writer unless you create the next Harry Potter. This simply isn't true. If you want to work as a writer, you don’t have to go the traditional book publishing route. You could get into journalism, whether through newspapers, radio, magazines, or television.

You could also become a freelance writer, work for yourself as a travel writer, or become a blogger. Or become a copywriter, creating text (or "copy") for advertisements, either as freelance or in more typical office setting. (A note on freelancing: it's hard to break into and the pay varies, but the flexibility and freedom it provides can be invaluable.)

In its many forms, media is not a field most people think of when they talk about creative professions. But many jobs that fall under this umbrella put a serious emphasis on creative ability.

I'm not talking about "the media" in the sense of news media and paparazzi, but about online content and advertising. For example, you could work designing, shooting, and editing YouTube videos on your own channel or with a team. Even bigger than that, the film and television industries have a high demand for creative skills, from acting to scenery design to camera work to costumes.

If you want a more typical desk job, there's also social media and website design. A strong website and social media presence are imperative nowadays, and many companies use graphics and text to draw in and inform consumers.

There are more artistic jobs too, from creating website layouts to designing graphics and logos in Photoshop. If these jobs appeal to you, a good place to start is to work toward Adobe certifications in programs like Photoshop, InDesign, and Premiere Pro.

Related: Getting Your Graphic Design Degree

While working in the music industry is tough, just like writing, you don't have to perform at Carnegie Hall to excel in this diverse field.

Let's start with a job you’re already familiar with: teaching. Whether it's teaching in a traditional classroom, giving private voice or instrument lessons, or leading a high school band or choir, you have a variety of options to share your passion for music with others.

Related: The Best Way to Pay for College as a Music Major: Become a Private Teacher

There's also the more traditional idea of performing as part of a professional orchestra, band, or solo act. If you play an instrument that can be used to accompany, you could become an accompanist for vocalists, weddings, musicals, or even movie and television soundtracks.

You could also compose music or arrange others’ compositions. There are also jobs behind the scenes in music engineering and even in the medical field in music therapy.

Ever dreamed of the bright lights of Broadway or the red carpet in Hollywood? The most obvious path here is acting, but it's not the only one. If being on stage or in front of a camera isn't for you, there are many jobs behind the scenes, such as moving sets and operating lights and sound during a show.

There are also sets to build and costumes to make and maintain. Higher up, shows at every level are led by a team of the director and various designers. And we can't forget the people who sell tickets, keep the theater clean, and ushers.

Visual art ranges from the Mona Lisa to video game animation. That's right—as video games and other animated works like movies become more and more detailed, animators have become artists. And animation is just one of the many options in this field.

Like all the other disciplines I've mentioned, you could teach anywhere from a pre-school classroom to a college one. There's also freelancing as a graphic designer. Or, if you're scientifically minded too, you might pursue art therapy. Even fashion design falls under this umbrella!

With dance, you could become a performer, whether joining a classical ballet company, a touring group from a specific genre, or performing in musicals. You could also teach lessons or choreograph groups for various reasons. Also, like music and visual art, the dance therapy industry is growing.

In addition to professions that delve into the world of the arts, there are jobs that help support those jobs and the artists who do them. If these sorts of jobs don't appeal to you, you still have options for helping share the arts with the world.

You could work for a nonprofit organization, give tours at an art museum, run the finances for a professional orchestra, or plan book release events for new authors. It takes so much more than the artists themselves to share their work with the world and make it sustainable.

Related: What Can You Do With an Arts Major?

Whether you love theater, writing, visual art, dance, graphic design, or so many of the other arts, if you have the passion, there's an opportunity somewhere for you. Your creativity is a powerful tool, so don't limit yourself to what might be called more “traditional” career paths. 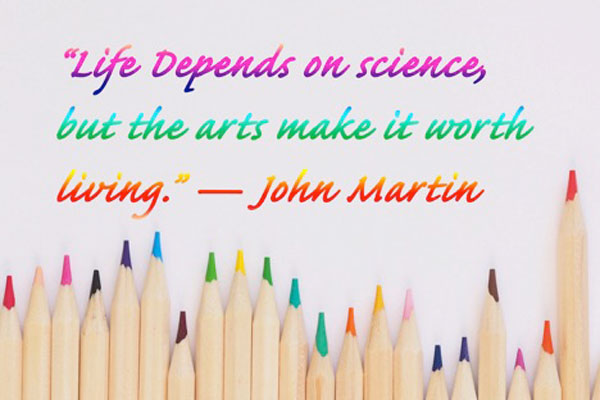 Check out our college search tool to find your perfect-fit arts program!

Emily is a college freshman at Morehead State University, where she is studying communications and theater. When she is not in school, she is an actor, musician, singer, and writer.