Every college or university should have a good ghost story. Here are a few campus ghost stories from real college students to get you in the Halloween spirit!

With Halloween only a few days away, we wanted to take a minute to address your campus ghosts. No, we’re not talking about that Bumble date who hasn’t talked to you since you met for coffee two weeks ago. We’re talking about real, live—well, previously live—ghosts that haunt colleges across the country. We asked CollegeXpress users for real campus ghost stories, and you guys delivered! Here are some spooky stories about some seriously scary campuses and real-life encounters with school spirits from the great beyond. Some stories have been edited for clarification and space. (Artwork by Matt Bradshaw of Gerbil With A Jetpack)

Thank you to everyone who contributed! Some of your ghost stories were a bit too scary or gruesome for this compilation, but we appreciate you sharing them and keeping us up at night. 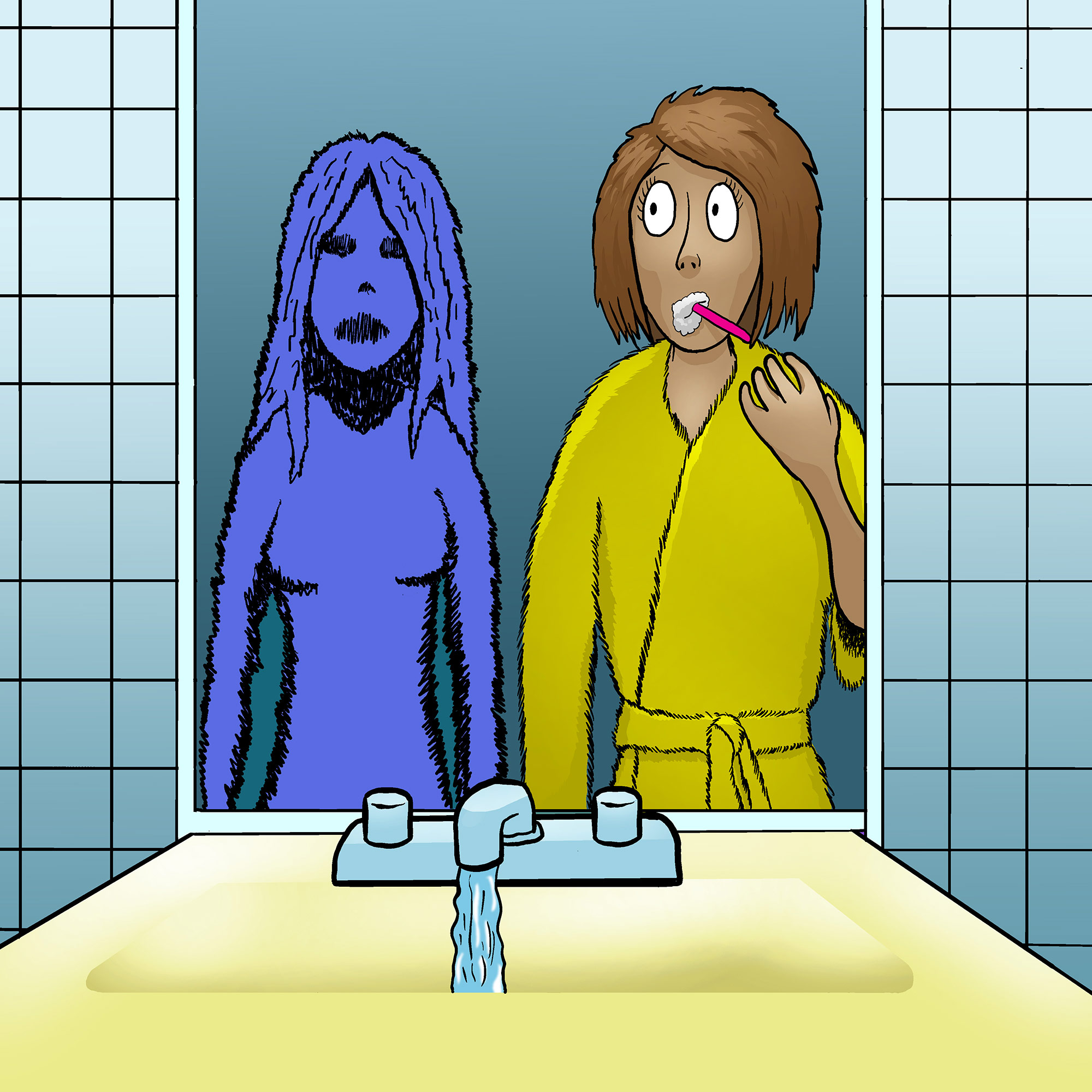 Who turned out the lights?

In a dorm years ago, a freshman student hanged herself in the top-floor bathroom. Students today still feel her presence, and there have been reports that she watches when girls come into the bathroom and will randomly shut the lights off and appear in the mirror next to them.

Marathon training stops for no one

Legend has it, there was a man who went out for a late-night jog out on River Road when he was hit by a car and died. It’s said that the man still runs on River Road every night. Students have reported seeing a man jogging down the street in a T-shirt and shorts at 2:00 am, even in the winter.

This was at my high school. A long time ago, there was an English teacher who would roller skate down the halls. He was a well-loved teacher, so it was a shame when he passed away. Present day: The 300 building was already creepy, but it got creepier at night, since all the noise that students made was nonexistent. Some teachers who stayed late liked to keep their doors cracked open. Doors would slam shut even though there was no breeze in the hallway. During the winter, a few teachers reported seeing a set of unknown footprints walking in the snow. We know it’s the roller-skating teacher because one teacher reported hearing his skates coming down the hall and the wind rushing as his ghost passed by. 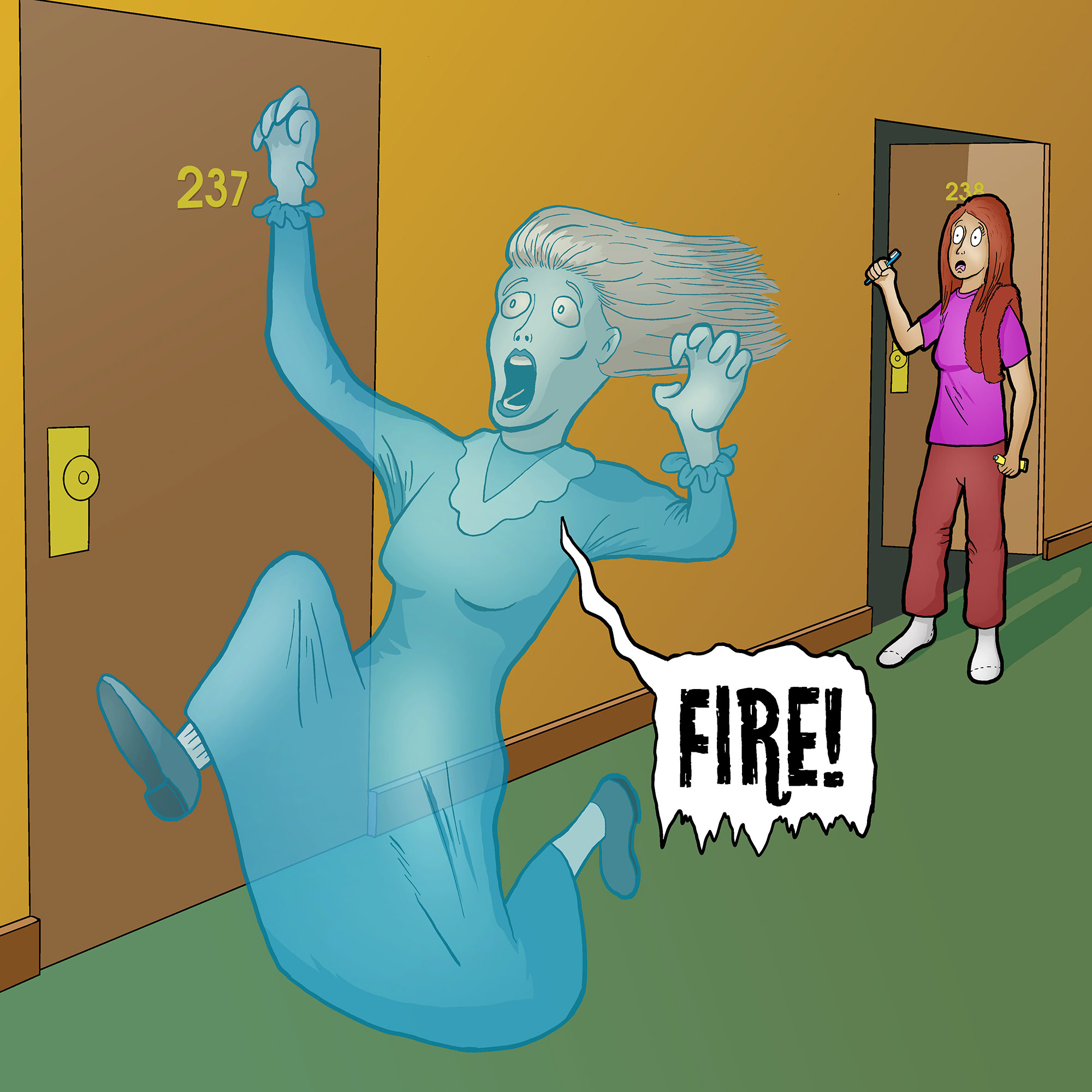 Bridgewater State is a super-haunted university with a lot of ghosts. Here are just a few:

When I was at UMaine, a friend told me that Estabrooke Hall was haunted and the ballroom on the first floor was part of the inspiration for The Shining by Stephen King (a UMaine alum!). The big open space with chandeliers definitely had an old, creepy vibe, and I just waited for blood to spill out of the elevators whenever I walked past them.

Come and play with us…

The dorm I lived in my freshman year was built on top of the ruins of an orphanage that burned down in an accidental fire. Four children died from smoke inhalation, and it’s said they now haunt the halls of Berry Residence Hall. There were always false fire alarms, and I would sometimes hear the sound of marbles in the hallways or kids laughing. The weirdest thing to me was that I lived on the sixth floor and would always hear someone walking above me in what sounded like high heels. That seems pretty normal for a college dorm, except there was no floor above mine. 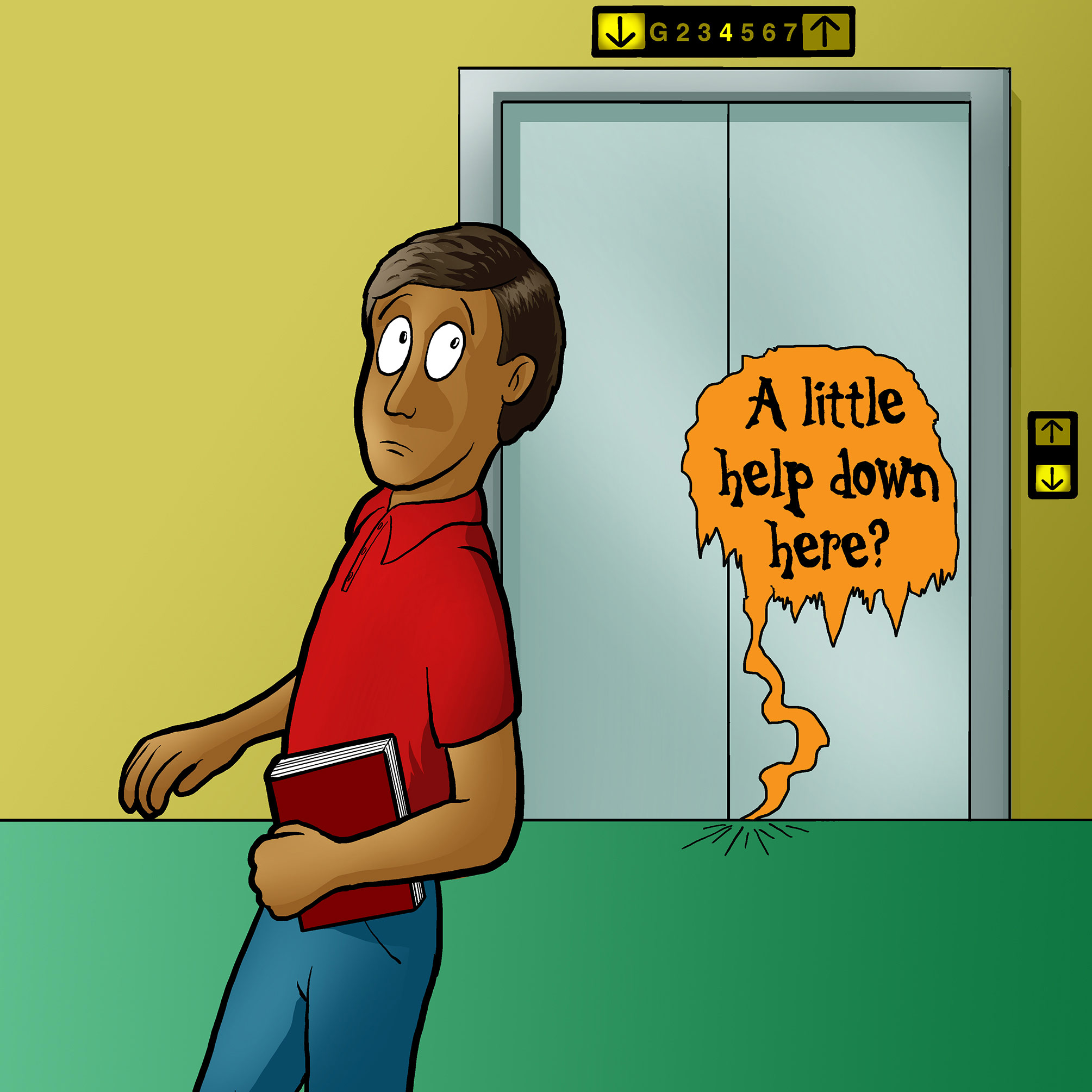 There’s a legend around campus that a custodian fell down the elevator shaft while cleaning one night. When you walk by the building, you can allegedly still hear him calling out for help.

Spirit, if you’re here, turn on the light!

My freshman year of college, my roommate and I bought two pairs of battery-operated lights. A few times the first semester, we would wake up in the morning and one or both pairs of lights would be turned on, and we just assumed one of us was sleepwalking, although neither of us had a history of that. One night, we were talking about it and I joked about us having a ghost named Light. About an hour later, we were both sitting in our beds and both the pairs of lights turned on at the exact same time. We were so freaked out but were hoped there was another explanation. After that night though, it continued to happen randomly throughout the semester, but we were no longer afraid of our ghost. We would just say “Hi" when it decided to pay us a visit.

There’s a ghost named Pepe who roams around one of the dorms because she allegedly killed herself there decades ago. People hear footsteps, lights turn on and off, and stuff falls off shelves—nothing too nuts. All the residents know about her and are okay with it, but they have to acknowledge Pepe if she’s there or she gets mad. 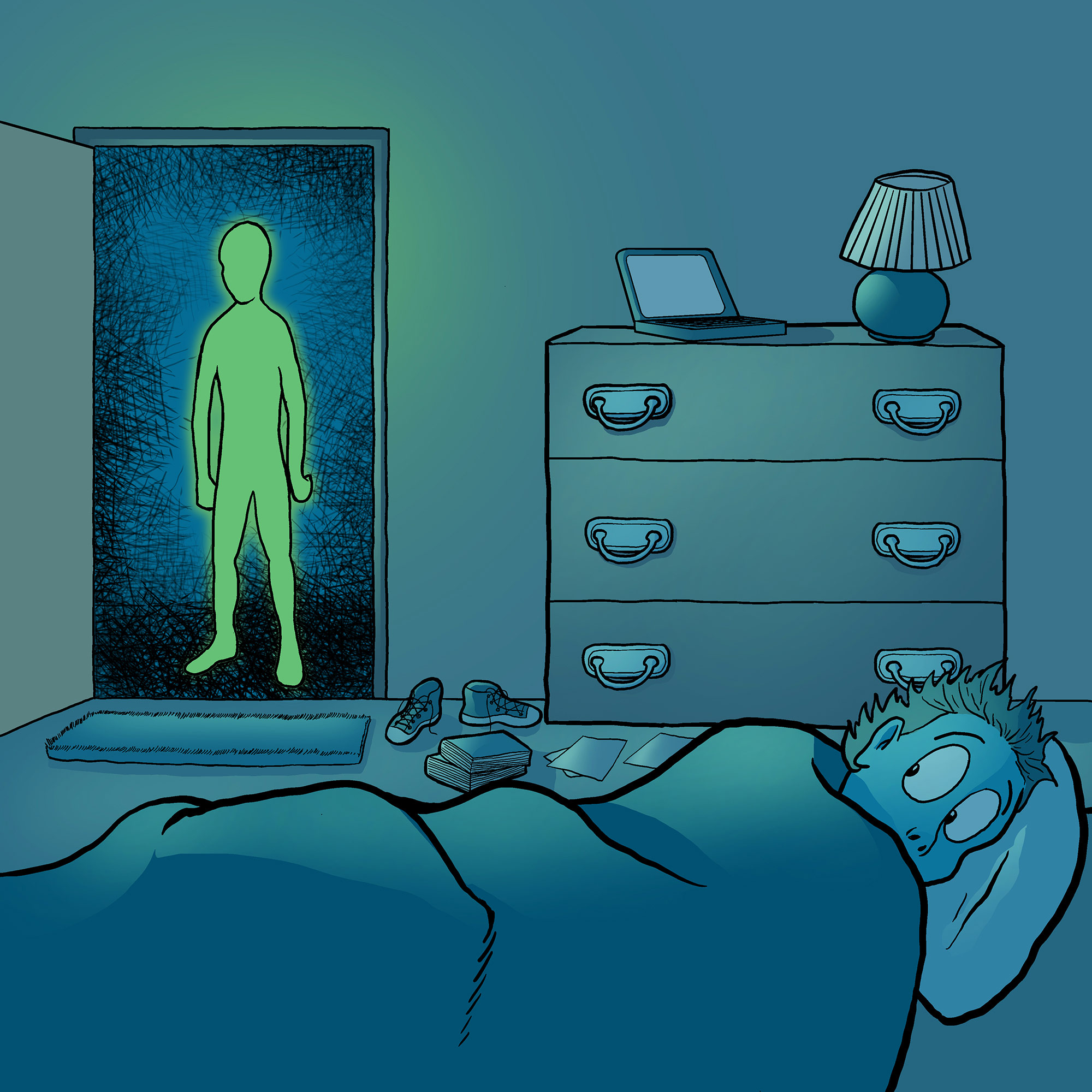 The doors in my suite used to slightly open all the time, and they would make a noise that sounded like somebody was there. My suitemates and I would yell "Hello" constantly, but there was never anyone there. A few times my roommate would wake up at night and think there was someone standing in our doorway, so we decided to only sleep with the door closed. The final straw for us was one night when we were sitting around, suddenly our phone rang loudly. When we picked up the phone, there was nobody on the line. Could it have been the air pressure in the suite opening doors and our friends pranking us? Sure. Does it seem more likely that this was the Hash Slinging Slasher? Absolutely.

All the first-year residence halls at Champlain College are renovated Victorian-era houses. I lived in one that used to be a fraternity house. Our RA told us we had a ghost named Chet, a frat brother who had fallen out of the widow’s walk to his death. My roommate would hear knocking and banging on the door when I was away, and there was a girl whose clothes would always be separated in her closet. Our room had a sloping ceiling because we were right under the roof, and I kept hearing footsteps above me, like someone casually walking on the rooftiles.

Tragedy down by the lake

Allegedly in the 1800s, the campus land was a private family estate, and the owner’s son drowned in Sebago Lake on the property. Students say the lakefront is haunted and that you can sometimes hear creepy splashing noises at night when no one is out there.

And there you have it—a bunch of great spooky campus ghost stories! Did any of these make you want to attend one of these colleges or universities? It certainly made us want to at least visit more than a few campuses. Happy Halloween! Stay safe and stay spooky!

Find a college or university campus you’d like to call home…forever…with our College Search tool!

I joined CollegeXpress just a few months ago. I had been struggling with severe anxiety, causing me to not be able to tour schools and make sure a college would be perfect for me. I came across CollegeXpress one day when I was searching for colleges online, and it completely changed the game. I was easily able to choose colleges that would suit me, and I also entered a few giveaways! Thank you so much!

Towards the beginning of last year, I was searching for scholarships to apply to through my school, town, websites online, and anything else I could find. I asked tons of questions [online] about scholarships and the best places to find them because I was desperate and I needed as many as I could find. I came across a ton of bogus websites but as soon as I found CollegeXpress, I knew I had to tell other people about it. It was definitely the most helpful site I came across, so I told my friends about it. . . . CollegeXpress is definitely a website worth giving as a source.