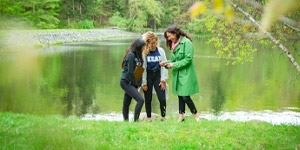 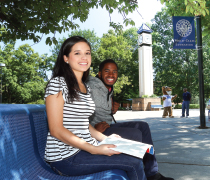 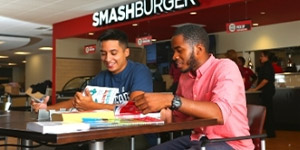 • One of the top five most diverse campuses in the United States, as ranked by DiversityInc

• Federally designated as a Hispanic-Serving Institution

• 30 minutes to New York City, with a train station adjacent to campus

• Study abroad in 30+ countries, including Wenzhou-Kean University (WKU), one of only three US colleges with English-speaking campuses in China

Ranked as one of the top five “Most Diverse Schools” in the nation by DiversityInc and a designated Hispanic-Serving Institution, Kean University prepares students for challenging careers in the evolving global economy.

New Jersey is a global pharmaceutical hub. In the sciences, the University’s Research First Initiative is the only program in New Jersey that offers a core curriculum in the first two years that integrates science and mathematics courses across STEM disciplines. And U.S. News & World Report named Kean’s Occupational Therapy program one of the best in the nation.

The Michael Graves College carries the name of one of the world’s premier architects and designers, Michael Graves, who infused his socially conscious philosophy into Kean’s Architecture and Design degree programs.

Known as the producer of the best teachers in New Jersey, Kean celebrates the success of all alumni, from chief researchers at national health care brands to athletic trainers on the sidelines at NFL games and beyond. Kean prepares students for rewarding careers, lifelong learning, and fulfilling lives—all while maintaining one of the lowest tuition rates in New Jersey.

Student and campus life
Life at Kean is a vibrant mix of academic, social, and cultural activities—students get involved both on and off campus with access to résumé-building internships locally and in Manhattan. Kean is a 30-minute train ride to New York City direct from campus, while world-class music, dance, and theatrical performances engage you right here. Premiere Stages, one of seven theatres on campus, is a professional equity theatre that supports the development and production of work by local playwrights. Theatre majors at Kean have the uncommon opportunity to earn professional credits in the Actors’ Equity Association as students here on campus.

With 170+ cultural and student organizations, honor societies, fraternities, and sororities, Kean offers students a wealth of social and educational opportunities.

Athletics and recreation
As a National Collegiate Athletic Association (NCAA) Division III institution, Kean houses several facilities on its main campus that support our athletic and recreation programs as well as personal fitness. Both the men’s and women’s volleyball teams are top seeds in their respective divisions, while the women’s field hockey team is ranked eighth in the country.

Financing your education
Kean is the most affordable comprehensive university in New Jersey, with students graduating with 32% less debt than the national average. With Kean’s scholarships and aid programs, including an out-of-state campus residency scholarship, students can achieve their academic goals with less of a financial burden by using a wide variety of University, federal, and state financial assistance, including merit scholarships, grants, and loans. kean.edu/financial-aid

Visit Kean to learn more about the University and its many opportunities and to experience our world-class facilities. Find your path to climb higher! kean.edu/visit