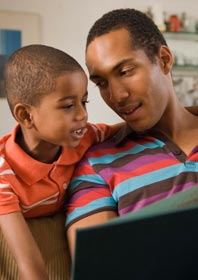 Remember when the idea of educating women was considered ludicrous? Neither do we. In fact, women have outpaced men in higher education for over a decade now, comprising about 60% of matriculated college students. Of course, in educational achievement as in all things, we want equality, and as men are lagging behind, more higher education analysts and advocates are wondering how we can—again—close the gender gap. Not only that, the disparate college enrollment indicates further-reaching problems: men and boys aren’t performing as well in school and they’re even dropping out in disproportionate numbers. As a parent with, say, one son and one daughter, you want them both to face equal chances of gaining a solid education and reaping all the opportunities that education affords. Author Daryl Capuano takes on this new gender achievement gap in his book Motivate Your Son: Inspire Your Boy to Be Engaged in School, Excited For College, and Energized For Success. Though the insights apply to any child, he addresses parents with sons and shares his perspectives here!

Greatness awaits! Your son might be able to create a career that provides more wealth, free time, and enjoyment at a far younger age than those in our generation could have ever dreamed. Yes, we are facing a turbulent economy. Nonetheless, today, your son could develop a combination of outstanding skills, credentials, contacts, and work character. He then could create an abundance of happiness and success through his work. The Facebook-Google-Twitter guys are the most spectacular examples of thousands of young adults creating their own extraordinary work lives outside the corporate grind.

Yet, approximately one-third of young men in their 20s and early 30s are not and may never become financially independent. Their young adulthood will consist of sporadic employment and underemployment, in and out and back into their parent’s homes and pocketbooks.

We live in a chaotic period of radical work path transformation. This is not the high school to college to stable career linear path we were cultured to expect. There will be some that thrive in this new landscape, others that struggle, and some that will face perpetual disaster. Your son is heading into this sea change.

What can you do? You can be the hero of your son’s journey. How? Embrace your role as his Chief Education Officer. If you expected that some teacher or coach or member of the village was going to inspire him or that he would “figure it out on his own,” think again—that 33% of men who have failed to launch prove otherwise.

You, as his CEO, are in position to shift him from outer-directed; only doing work to avoid nagging, to self-directed; doing work in order to reach his potential. To do so, you need to educate yourself on how to motivate your son. But, before you begin, you need to be motivated.

After several years of nagging to seemingly no avail, most parents give up. They say they tried their best and now “it’s up to him.” And, most certainly did try. After working long days, they would come home and ask their son if he had done his homework. They would check on him periodically to ensure that he was working. After subpar grades, nagging would ensue: “You better work harder!” Threats of punishment would follow: “If you don’t get good grades, you will lose your Xbox!” Warnings of a dim future would come thereafter: “You’ll never get into a good college!” Criticisms would be inevitable: “How can you be so lazy?!” If you hear yourself in these statements, you are not alone.

As CEO, your first and most compelling area of attention should be learning how to inspire your son. This is not easy but it is the better way. Nagging is indeed necessary in the short term. You have to make sure he studies for tomorrow’s test. But, inspiring is the long-term solution. If you succeed, everything else—his deficient study skills, his limited outside reading, his penchant for playing video games endlessly—becomes more manageable.

To inspire your son, think of yourself as his coach. All great coaches are amateur psychologists. They understand patterns of the human psyche: how to identify the specific patterns within their trainee and what unique motivational triggers need to be pressed in order to help their trainee make the most of his or her potential.

What is the initial step to becoming a great coach? Know thyself. Your inspirational messages emanate from the way that you are wired. However, it is likely that your son is wired differently.

For example, you might be primarily driven by the need for security. Adulthood may have accentuated this fixation but as a youth you also prudently sought stable paths. As a parent, you try to inspire by saying things like “You should study hard so that someday you can get a secure job.” While this may be generically sage advice and would have worked with you, it might have the opposite effect on your son.

Your son might have a psychological pattern that is primarily driven by the desire for freedom. For you, a secure job translates to a fortress against anxiety. But, for him, it may seem more similar to a future prison. Doing something that makes him feel trapped now, like studying, in order to get more of the same feeling later will have a deflationary motivational effect.

“You should study hard so that someday you can have freedom.” In today's new world of work, this is an equally valid paradigm. Those who will put themselves on the path of abundance will work intensely for periods of time and then, if desired, choose freedom from work. As evidenced by otherwise lethargic teens running wind sprints when striving for athletic success, even the most apathetic adolescent boys understand that one has to work in the present for future rewards. If you inspire him sufficiently, he’ll engage in the struggle. And, you’ll be his hero.