How to Make Your Own College Roommate Agreement 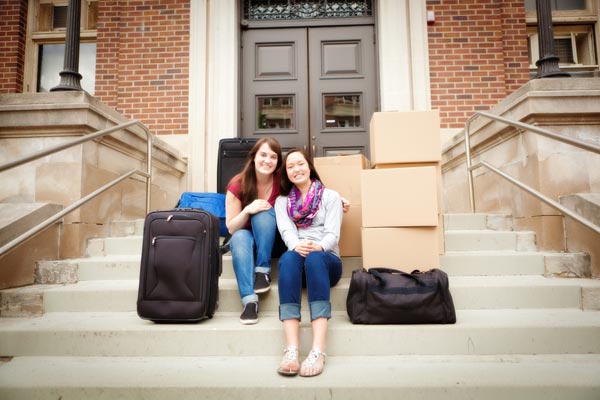 Even if you don’t want to use an official roommate agreement, you should still talk about these important issues with your new dorm roomies. Make sure you do it early on in the semester too!

BTW: there's a sample roommate agreement at the end of this article you can download and use too, just in case you need it!

At the top of the list of many new college students’ fears when they move away from home for the first time is living with a roommate. How are you supposed to know how to live with a complete stranger? Yet, one of the top things that gets pinned as “lame” by new college students is the roommate agreement. It might seem silly to sit down with your new RA and talk about what you want and expect from your new roommate. No one wants to be the “un-cool” one and talk about when they go to bed or whether or not they drink, but most of the time it’s helpful to have these conversations.

If your college or university housing department doesn’t give you a roommate agreement (or you just decide you don’t want to use it), here are the top things you should write down and talk about with your roommate(s)—before it’s too late.

I know you don’t live at home and you don’t have anyone telling you when to go to bed, but setting a loose bedtime for yourself isn’t a bad idea, especially if you have classes early in the morning.

In any case, you should talk about it with your roommate, if only a little bit, so you both know when the other usually goes to bed, if they tend to nap, if one of you comes home much later than the other, etc. And when it comes to actually going to bed, you should talk about whether you need total silence and darkness to sleep after a certain time or if you can sleep with lights on or music/TV playing (this goes for if one of you gets up way before the other too).

It’s really easy to come up with an agreement for these things, actually. I’ve been in situations where me and my roommate texted each other if one of us went to bed while the other was still out so we’d know not to come in screaming and slamming the door. This is also a good time to talk about what you’d like to do (texting, calling, etc.), if one of you will be gone for a night. That way you don’t wake up to find your roommate never came back and start to panic. Yes, I say this from experience.

Related: Getting Along with Your College Roommate: What NOT to Do

College housing offices tend to cover this one pretty well, since dorm security will often require you to sign guests in and out. But it’s still worth talking about, especially if you and your roommate have vastly different ideas about what having people over entails.

Important topics to discuss: How do you feel about guests of the opposite sex? How do you feel about people staying the night? Do you want to designate certain days/times as guest-free so you can study, work, or sleep? When do guests need to leave at night? How much advance notice, if any, do you both expect?

You might also talk about where your overnight guests would stay if your roommate isn’t there. Some people are fine with their roommate’s friends sleeping in their bed; others are not. A good rule I was told: if roommate A is gone for the weekend and roommate B has someone over, B sleeps in A’s bed and B’s guest sleeps in B’s bed. That way no one has a perfect stranger sleeping in their bed!

Your dorm building will probably have its own rules on guests, so that can help get this conversation going with your roommate. But, to be honest, unless you have a super vigilant RA or things get rowdy, the rules probably won’t be strictly enforced. That’s why it’s important to talk to your roomie on your own. Because having strangers in your space can be a touchy subject for people.

This is something that doesn’t get covered by a lot of college housing offices, but it should. And you never realize how important cleaning is until it gets neglected or all falls on one person. Things to think/talk about: Who cleans what? When do we clean (how often)? Who’s responsible for buying cleaning supplies? How neat and tidy to you like to be overall?

Related: How to Avoid Fighting With Your Roommate

You’ve been learning about sharing since preschool—but there will still be people who aren’t great at it when they get to college. In some dorms, especially those for freshmen, you may not need to worry about this much; you could do a “this is my side, that’s your side” thing in your dorm and nothing more. Then again, you may have a shared mini fridge or microwave, or maybe you’re cool with sharing your clothes and want you roomie to know that. Or maybe you’re really not okay with someone touching your stuff; that’s fine too, but you want to get these things out in the open ASAP.

And in larger dorms where, say, you have your own bathroom, there becomes the issue of shared spaces, who wants to watch TV when, who is taking up all the shelves in the fridge, who’s hogging the bathroom sink in the morning, etc. Some of these things you won’t figure out until you’re well into the semester and everyone’s nailed down their own routine, but it’s still a good idea to have the conversations early to nip potential problems in the bud. You don’t want to be bottling up your frustration all semester and exploding the next time your roommate uses your shampoo without asking.

Your or your roommate’s allergies could be a minor problem you don’t even need to talk about. Or they could be a huge issue that you have to be constantly aware of. Depending on how bad the allergies are, you may not be able to have certain foods in your room, and you might want to talk to your housing office if, for example, you just can’t live without peanut butter and your roommate can’t live with it. Also, if one of you works with animals you’re allergic to a lot or really likes a certain perfume, the issue may not be as serious but might be worth mentioning (though with scented things like perfume, it’s best to spritz easy and be considerate no matter what!).

Drinking (and other intoxicating substances) can be a touchy subject. Some people will be very comfortable talking about this while others won’t; some people have strong feelings about drinking while others don’t care. However, this one is really important to talk about on your own with your roomie, because I can almost guarantee it won’t be on any roommate agreement you have to fill out from the housing office, since most traditional college freshmen aren’t of legal drinking age and you probably won’t be allowed to have alcohol in dorm buildings anyways.

Even though it’s probably illegal for you to drink, I’m including it in things to talk about with your roommate because, let’s be honest, you’re both adults and drinking happens in college. And while you can’t control each other’s lives, you both have a right to not be put in situations that make you uncomfortable, especially where you live. So have a frank discussion about your feelings and expectations about drinking.

Trying to live with someone you’ve never met before can be scary. You want to be “cool,” maybe even become friends, but you also don’t want to get in over your head if your roommate likes partying a lot more than you do. But like so many things in college, it all comes down to maintaining a balance: family and friends, schoolwork and your social life, having fun and not having too much fun. (Like, getting arrested fun.)

This is especially important when it comes to your roommate(s); you both have a right to live your own lives, but you are not each other's parents. Even if you were the “mom” in your high school friend group, it’s a very fine line between acting concerned and coming across like you’re trying to control your roommate. (Of course, it’s a different story if you think there is an actual, serious problem that could get someone hurt, in which case you should take to an RA and/or campus police. But I digress.)

All in all, living with someone in college can be intense, but it can also be amazing. You won’t realize until you get there, but almost everyone else is just as scared as you are. And there’s much to be learned from each other and a lot of fun to be had.

PS Just in case you need it, we also put together a roommate agreement you can use! You can view and download it here and by clicking the image below. (Let us know what you think in the comments!) 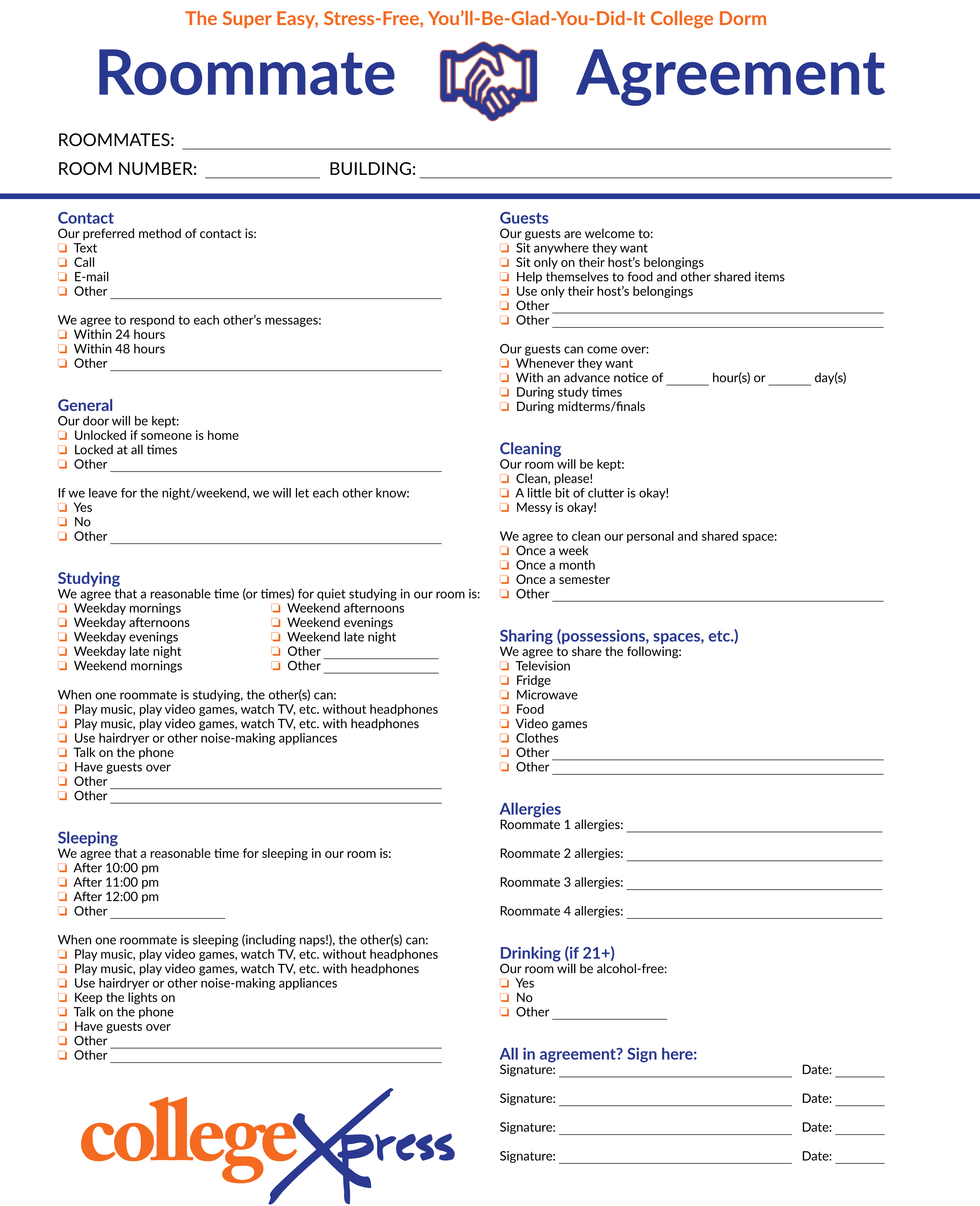