What Are Test-Optional Colleges All About? 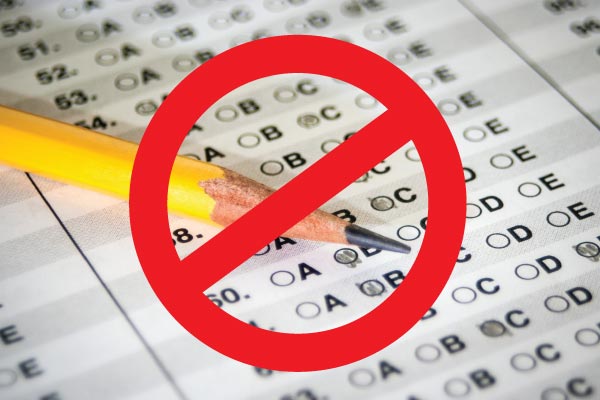 Test-optional schools—aka schools that don't require SAT or ACT scores—have been changing college admissions in a big way. Here's what the test-optional movement is all about and what you need to know as you apply to colleges.

When high school students hear more and more colleges aren’t requiring any standardized tests in the admission process, they get a little suspicious. After feeling the initial relief, they wonder if it’s too good to be true.

In short, this test-optional trend really is happening—but it’s not so universal that you can just write off the exams altogether.

Lots of colleges and universities are deciding the long-used standardized tests don’t give them enough information about a student to require them for admission. The tests aren’t without controversy either; organized groups wage battles and bring lawsuits against the test companies claiming the tests are discriminatory and not used properly. However, the majority of colleges still believe test scores provide useful information about their applicants. And they still require them.

So…what exactly do college admission folks want from you on the standardized test front? Let’s take a closer look.

What is “test optional” about?

Colleges with test-optional admission policies make sending in test scores just that: optional. You get to choose whether to send your scores to that school or not. If you took the ACT and did well, you can send the score as part of your application packet. If you weren’t happy with your score, you can leave it out. However, it’s important to keep in mind that other things may take the place of the standardized tests. For example, test-optional schools may ask for graded writing samples. And, without tests, other parts of the college application (GPA, rigor of high school classes, essay, etc.) may become more valuable.

“In the last couple of years, there’s been a sharp surge in more schools going test optional,” says Bob Schaeffer, Public Education Director of FairTest: The National Center for Fair & Open Testing, a nonprofit in favor of—you guessed it—test-optional admission policies. “More and more schools are recognizing that test scores don’t play a necessary or even useful role in the admission process.”

But even Schaeffer’s test-optional world doesn’t let today’s high school juniors and seniors off the hook. “The reality for high school students is that they will likely apply to one school that requires the test,” he says.

Another standardized test critic, Jon Reider, Director of College Counseling at San Francisco University High School and the co-author of Admission Matters, says he should be thrilled with the tests, as students at his school turn out consistently high scores, but he believes the tests are more detrimental than helpful. Still, he wouldn’t advise any of his students not to take them because they’re part of today’s college application landscape.

What tests are we talking about anyway?

Traditionally, high schoolers have taken the SAT or the ACT in their junior and/or senior years. Some colleges also require at least one of the 20 SAT Subject Tests, which measure proficiency in a specific subject such as biology, math, chemistry, world history, and various languages. Many students take the tests more than once in hopes of increasing their scores, which are then sent to the colleges the student is thinking of applying to.

In spring 2016, the College Board (the company that administers the SAT) debuted a revised version of the SAT they said would “measure the essential ingredients for college and career readiness and success, as shown by research and have a stronger connection to classroom learning.” (However, many critics said they were just trying to be more competitive with the ACT, which recently eclipsed the SAT as the more popular admission test.) Major changes to the new SAT included not taking off points for wrong answers, a focus on more “real-world” math, and bringing back the old 1600-scale scoring and an optional essay.

With all the focus on standardized tests, it’s sometimes hard to see the scores are only one part of the admission process.

“In my admissions office, the single most important factor is the quality of the curriculum a student has engaged in and the achievement in those courses,” says Michael Beseda, Vice President of Enrollment and University Communications at Willamette University, which plans to transition to test optional in fall 2017. “If you’re working very hard in your classes, that’s what’s going to get you into college, not one test on one weekend.”

David Hawkins, Executive Director for Educational Content and Policy at the National Association for College zon our research, the most significant part in college admission decisions across the board is the grades you earn in high school,” he says. “We want to clear up any misconceptions that a test score will make or break them in the admissions department.”

Experts want parents and students to remember that even a perfect test score doesn’t guarantee admission to any school. It’s quite the achievement, to be sure. But from a college admission perspective, if it comes from a student who does no other activities, spends the summer in a test prep camp, and writes a poor application essay, it doesn’t mean as much. “Schools that are moving to test optional say they can’t tell if the high test scores are the result of a well-read verbal kid or of one whose parents spent $15,000 on test prep,” says Schaeffer.

Essentially, colleges use your application to figure out if you’re a good match for the school. No test score tells them that, but the high school transcript, extracurricular activities, community service efforts, and essay give a better picture, says Reider.

Beseda says the admission office thinks about high school courses in the context of the school each student comes from, and they see if students are challenging themselves. “If they are, that’s the single best predictor of success in college and the most important factor,” he says. But test scores can help the admission team as well. For instance, a student with mediocre grades but exceptional test scores might warrant a little more investigation.

Madie Duffey, a senior in Leominster, Massachusetts, knows standardized tests aren’t everything, but she says its importance still weighs heavily on her. “I think that it would be smart of colleges to make it optional,” says Duffey, who took a few free practice tests online and signed up for an SAT prep app. “Some people cannot take tests [well], yet they know the content better than anyone else. Tests like these can be extremely stressful since you don’t know what will pop up.”

Reider says the colleges that decide to go test optional do so because they are placing a different value on a student’s record. But although the trend is growing, he doesn’t see the majority of schools tipping to test optional any time soon.

With 70%–75% of four-year colleges requiring at least one standardized test, Hawkins says colleges see SAT and ACT scores as useful. “The tests have become interchangeable within the college admissions requirements,” he says. “The construction and philosophy on the tests are different, but the predictive ability of the tests are the same. Only a handful [of colleges] prefer one over the other.” Translation: it doesn’t really matter if you take the SAT or ACT.

How should you prepare for the tests?

Amid all the anxiety about test scores and where they fit into the college application process, standardized test prep companies—think Kaplan, The Princeton Review, or local tutors—are reaping the benefits of students and families terrified over test scores. Not only that, the families that don’t (or can’t) send their students to an expensive test prep course worry their kids will be at a disadvantage. But is test prep worth it?

In a word, yes—but not exactly in the way you might think. “In our test prep research, the largest share in an increase on test scores is associated with familiarity with the tests,” Hawkins says. Essentially, the better students know the tests, the better they tend to do. And you don’t need to take a test prep course to get to know the SAT and ACT.

Because the tests are a standardized assessment of all the different information a typical high school student has amassed, you can’t really cram for them. Instead, test prep is effective because it helps you get comfortable with the test format and what it feels like to take it.

“The most important part of any test prep is taking the practice tests,” says Schaeffer. “You learn how fast you have to go and you get comfortable with making guesses. If your practice tests reveal you to be in the [score] range of the schools you are applying to, take the test once and get on with your life.” And if your scores are lower than what your chosen schools are looking for, that might be a nudge to get a little more practice under your belt. You can review your results to see where your weak spots are. Practice tests can also help you figure out if you perform better on one test over the other.

You should set aside time and take practice tests until you feel comfortable with the style and content. There are many free or cheap practice options available today, including several free programs through Khan Academy and the College Board site. With the ACT, for example, you can download a free Preparing for the ACT booklet. Test prep might also be offered through your high school, or you can order test prep packages online. If you’re more social, sign up for a class or hire a tutor. You can also sign up and get a weekly practice question for the ACT or a daily SAT practice question. The more exposure you get to each test, the better.

So, should you take standardized tests?

But above all else, put college admission tests into perspective. Don’t blow them off, but don’t expect them to change your world either. “Do the best you can do,” says Reider. “Take a couple of Subject Tests, do the essay. Forget the score choice and just send all your scores.”

Hawkins agrees. “Focus your energy on your course work,” he says. “Given that the tests are a fact of life, then practicing can help. Becoming familiar with the test format is the best thing you can do. If you familiarize yourself with the tests, then you are on your way. Tests are only one piece of the puzzle.”

Still looking for the college to send those test scores to? Try our super easy, super fast college search tool.