A Day in the Life of a Health Care Team 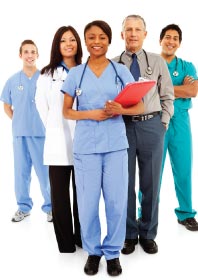 From physician assistants to radiologists to dietitians, there are so many career options in medicine beyond the doctors and nurses you’re accustomed to seeing on television and during your yearly checkups.

Team-based care—a group of health care providers working together to administer the appropriate treatment to a patient—has become the standard model, as professionals share their complementary skills and knowledge. If you’re considering a career in medicine but aren’t sure where to start, it can help to take a look at the many different types of health care providers out there. We hope to give you an overview of those providers and their responsibilities through the following scenario. (Though a fictional story, this is quite representative of how a team of medical professionals works together to ensure patients receive the best care possible!)

One night Lauren was driving home on snow-covered roads when she noticed a small vehicle spinning toward her large SUV. She had a choice: swerve off the street and hit a huge pine tree or stay on the road. She chose the road and a few seconds later, the spinning car plowed into the vehicle carrying Lauren.

Someone in a neighboring house heard the crash and called the police, who were on the scene within minutes. When the ambulance arrived, Lauren was adamant about not going to the emergency room because her leg “wasn’t hurting that much.” After a few minutes, the paramedics convinced her to go to the hospital.

Paramedics serve on ambulance crews and, in the case of accidents, can be the first medical provider to the patient. According to the UCLA Center for Prehospital Care, paramedics with backgrounds as emergency medical technicians (EMTs) have skills that include “administering medications, starting intravenous lines, providing advanced airway management for patients, and learning to resuscitate and support patients with significant problems such as heart attacks and traumas.” The paramedics safely transported Lauren to the local hospital’s ER.

Lauren was greeted by a friendly emergency room nurse as she was wheeled into the patient room. “In a typical day (if there is such a thing!) the emergency nurse may well treat patients with everything from severe respiratory distress to chest pain, overdose incidences, seizures, pulmonary edema, and countless other scenarios,” says Anne Manton in her article “Emergency Nursing.”

As the emergency room nurse assessed Lauren, the emergency room physician made a quick visit to her room. After he finished interviewing her and conducting a physical exam, the doctor ordered an X-ray of Lauren’s shin and ankle. According to the Department of Emergency Medicine at the University of California, Irvine School of Medicine, “The emergency physician’s role is to assess, treat, admit, or discharge any patient that seeks medical attention at any time of day or night.”

Lauren was wheeled out of the room and into the X-ray room. There she met the radiologic technologist who performed the X-ray on her. Radiologic technologists “are the medical personnel who perform diagnostic imaging examinations and administer radiation therapy treatments,” says the American Registry of Radiological Technologists. These health care professionals work with radiologists, who the American College of Radiology describe as “medical doctors (MDs) or doctors of osteopathic medicine (DOs) who specialize in diagnosing and treating diseases and injuries using medical imaging techniques,” from X-rays and MRIs to ultrasound.

Once the radiologic technologist finished, she told Lauren she would take her back to her room and the radiologist would review the X-ray, report the results, and discuss them with the emergency room physician.

Soon after, the emergency room physician visited Lauren to inform her that her ankle had sustained a fracture and she needed to have it casted in the orthopedic division. Once in that area of the hospital, Lauren met with the physician assistant (PA). These medical professionals “perform physical exams, diagnose illnesses, develop and carry out treatment plans, order and interpret lab tests, assist in surgery, provide patient education, and in most states, prescribe medications,” according to the King’s College PA program website.

The PA reviewed her X-ray and escorted Lauren to the casting room. As she waited for the PA to return with the orthopedic physician, Lauren noticed the array of casting tables, supplies, and instruments. Lauren’s doctor showed her the fracture on the X-ray and explained the casting process, and even let her pick out the color of her cast. Orthopedics “focuses on injuries and diseases of your body’s musculoskeletal system,” according to the American Academy of Orthopaedic Surgeons. “This complex system includes your bones, joints, ligaments, tendons, muscles, and nerves and allows you to move, work, and be active.”

Lauren returned home from the ER and started experiencing some soreness in her neck. The next day, she scheduled an appointment with her family physician to discuss the accident and her pain. Lauren was checked in and escorted to her room. The nurse asked if it was okay to allow a third-year medical student to observe the appointment, and Lauren agreed.

Students in their third year of medical school participate in clinical experiences in each of the six core disciplines of medical education: surgery, medicine, psychiatry, pediatrics, family medicine, and OB/GYN. As part of their medical education, medical students get to see patients during their studies so they can learn from them and the other members of the health care team. Lauren explained the accident and her symptoms to the med student and family physician, who reviewed the negative X-ray and ordered an MRI of her head and neck.

As she entered the MRI facility, Lauren met the medical assistant, who checked her in for her MRI. These professionals “work alongside physicians, mainly in outpatient or ambulatory care facilities, such as medical offices and clinics,” according to the American Association of Medical Assistants.

The medical assistant notified the Magnetic Resonance Imaging (MRI) technologist that Lauren was ready for her. “MRI technologists perform scans using radiofrequencies within a magnetic field to produce images of bones, organs, and soft tissue,” says the American Registry of Radiologic Technologists.

As Lauren lay patiently while the MRI was being completed, she tried not to move, as the MRI technologist requested. Once the MRI was completed, the MRI technologist informed Lauren that the radiologist would evaluate the MRI, write a report, and send the information to her family physician. Lauren was satisfied and left the appointment with hopes the she would soon have an answer to her neck pain.

The MRI revealed that Lauren had sustained a muscle strain, better known as whiplash. Therefore, her family physician suggested she see a chiropractor. “Doctors of Chiropractic perform patient management and conduct diagnoses, giving special emphasis to neuromusculoskeletal conditions,” according to the New York Chiropractic College.

Lauren was comfortable with this suggestion, and during the office visit, the chiropractor informed her that there were issues with the cervical vertebrae of her spine. Her chiropractor advised Lauren to continue with biweekly appointments and not to lift anything over five pounds. She was hopeful that this would help her manage the neck pain caused from the car accident.

As Lauren continued her treatment plan, it was soon time to return to the orthopedic physician’s office for her cast removal. Once the cast was removed, Lauren was taken for additional X-rays of her ankle and given the fantastic news that it had healed and she did not have to be casted again.

Because her ankle was in a cast for six weeks and her muscles had weakened, the orthopedic surgeon suggested she see a physical therapist to regain the flexibility and strength in her ankle she had prior to the accident. Lauren was thrilled that her recovery from the accident was almost complete and that she would soon be able to return to her normal activities.