Declaring a Major On Your College Apps 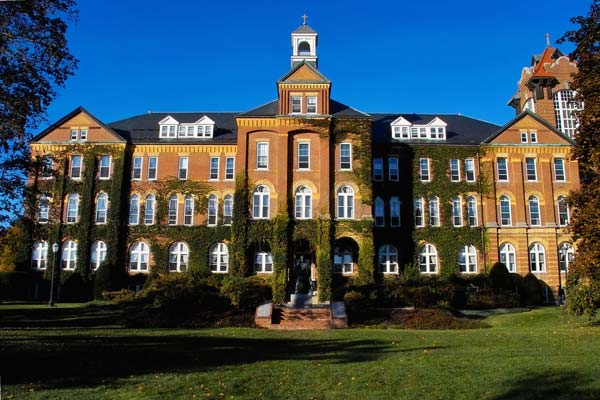 You’re breezing through your college apps, and then this seemingly life-changing question stops you in your tracks: what is your intended major?

Maybe you feel pretty certain about checking off “Biology” or “Marketing and Communications” or “Civil Engineering.” Maybe you have no idea what you want to major in and you’re ready to say “undecided” and leave it at that.

There really isn’t a wrong answer here. However, there are advantages and disadvantages to declaring a major (or not) on your applications. And you should know what those pros and cons are, because they can have a big impact. On what? Keep reading.

What does declaring a major on your college application actually mean?

Sometimes declaring a major on your application is basically saying to admission folks, “Hey, I’m really interested in this subject.” And if you change your mind down the road, NBD. This tends to be true at liberal arts schools in particular, like Grinnell College. “The majors students list on their applications have no bearing on admission to the college,” says Director of Admission Gregory W. Sneed. “The fact that a student lists an intended major on his or her application tells us a little about the student’s academic interests, but we do not put much stock in it.”

It’s similar at Scripps College, says Director of Admission Laura Stratton. She points out that most students simply haven’t experienced enough in their 17-ish years to make an informed major choice when they’re applying. And a lot of colleges take that into account.

Other times, however, declaring a major on your college apps is more serious. It can be the same as saying, “I want a spot in this program at your school. Not that program. This one.” When that’s the case, your application will be judged against all the other students interested in that program, and you could be making a pretty serious commitment to that academic path.

But here’s the crazy part: there are some colleges out there that require students to declare a major (or a first-choice major and some backups) and some that encourage students to remain undecided for a year or two. It varies from school to school—and it’s up to you to figure out where your potential colleges stand.

“Be aware of the admission process and options at the schools you are considering,” advises college admission consultant Eddie LaMeire. “For instance, the University of Illinois at Urbana–Champaign has a tremendous Computer Science program. It is also very competitive. However, UIUC allows students to be considered for admission into general studies in the event that they are not admitted to their first-choice major. Conversely, in the case of UC Berkeley, students have one chance at a major. In the event that they apply to the College of Engineering and they’re denied, there’s no safety net of an alternate major to be admitted to.”

Luckily, a little online sleuthing or a phone call to the admission office might be all it takes to figure out how your colleges consider declared majors. Then, once you know, you can make an informed decision. Beyond that, here are some general pros and cons for declaring a major or going in undecided.

Related: Find a college that fits you (and your major) here

Another big advantage to declaring a major is eligibility for major-specific scholarships. These could be awarded through the college, or you may find scholarships through outside organizations. A less lucrative but still fun “pro” is the ability to live in special major-specific campus housing.

Declaring a major can be especially helpful if you’re interested in a program that dives into its course work early on. For example, many Engineering programs include major prerequisite classes as early as freshman year. So if you’re considering such a major, you’re probably better off declaring it when you apply, because catching up with the pre-reqs and transferring into the program later on may be difficult.

Having a specific major in mind can also help strengthen your overall college application. You can showcase your sincere interest in your major both through the activities you list and in your application essay. For example, a future Business major could write about any side hustles they’ve started. You’ll give admission reps a clear picture of the kind of student you’ll be—and make a strong case for a spot in their freshman class.

“Noting your intended major on a college application is generally a good idea, because it shows admissions committees that you have a firm direction and plan for the future,” says Stephen Black, Head Mentor at the admission consulting firm Admissionado. “Even if you’re not 100% sure that this will be your major—and virtually nobody is certain—it nevertheless shows that you are interested in exploring a particular field.”

In some cases, declaring a major on your college apps can complicate things. On the one hand, declaring can help you distinguish yourself. “This is particularly true in the case of students applying to majors in Engineering, Business, Fine Arts, and other competitive fields,” says LaMeire. On the other hand, in those same competitive majors, admission standards (like test scores, high school course rigor, and math abilities) tend to be higher. So you’ll probably be up against more competitive applicants too, LaMeire adds.

Stratton says a declared major can sometimes have a stronger impact on your college trajectory than you might want as well. When colleges require students to declare a major when they apply, it may be difficult to change majors after enrolling, she says. That’s not to say you can’t change your mind; in fact, if your admission credentials weren’t up to snuff to get into a more competitive major the first time around, you can spend a year improving your GPA to (hopefully) get in later—but there’s also no guarantee a spot will be open. (This is why trying to “sneak” into a school by declaring an “easy” major and then switching is a bad idea.)

If you have questions, talk to admission reps at the schools you’re considering. Ask questions like, What happens when students want to transfer into a particular major? Are spaces limited? Do students still tend to graduate on time?

And remember, even if you already know…or think you know…or sorta-kinda-almost know…what you want to major in, it’s still good to keep an open mind. You just might end up changing your major anyway. In fact, most students—an estimated 50%–70%—do. As Sneed says, “College is a time to explore your interests.”

Don’t know what you want to major in? All the experts agree: that’s okay! “There are some students who have their lives planned out from the time they are in middle school. But the majority of students need a little more time than high school to figure out their academic interest and their professional focus,” LaMeire says.

If you do need more time, “it’s recommended that you show a high level of interest in future academic exploration,” on your college application, according to Black. This means demonstrating your motivation in other ways—by earning high grades, demonstrating extracurricular involvement, and discussing your future goals in your application essay.

The essay is a great place to show your true colors if you’re undecided. While you definitely want to steer clear of anything like, “I have no idea what I want to do with my life,” you can write about how you’re undecided because you have multiple interests and know that this college is the perfect place to investigate them all. After all, being undecided in college allows you to explore your interests to find the major that truly fits. You can take classes, talk to students and professors, and join clubs to get a feel for all your options.

Some research even suggests students might be better off if they’re undecided. For example, students in a recent class at Western Kentucky University had higher four-year graduation rates when they waited two years before declaring a major (83.4% graduated on time, compared to 72.8% of students who declared and didn’t change their major). And graduating in four years is a big deal, since it saves time and money.

Many schools offer specific courses and other resources to help undeclared students make a decision too. The University of Cincinnati has a Center for Exploratory Studies, one of many similar programs found at colleges all over the country.

Since statistics show that you’re fairly likely to change your major anyway, going in undecided can be a good way to take control of your academic destiny. Provided you have a plan, of course…

Many of the cons of being undecided are just the opposite of the pros of declaring a major: you may lose out on a space in a competitive major, as well as major-specific scholarships or housing programs.

It’s also important to remember that being undecided isn’t just a free pass to do whatever you want. You really do need to have some ideas and a plan in mind for exploring and declaring a major eventually—or it can cost you. If you wait too long to declare a major, you might miss courses you need to fulfill the degree requirements or end up taking classes you can’t apply to your degree. You’ll then need to spend more time and money making up those credits. If you work with your academic advisor (and/or the major exploration program at your school), you should be fine. But it is work, and you’ll need to be ready for it.

At the end of the day, make sure you do your research and keep your eyes on the prize: finding a college that fits you and your future goals. “The college search process is just that,” Stratton says. “It’s a student’s opportunity to move through a process—and get to know themselves better while doing it—searching for a college [and a major!] that is right for them.”