The College Intramural Sports You Want to Play 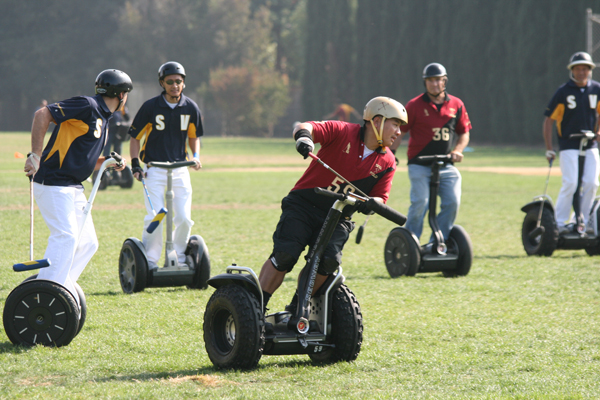 Basketball, football, hockey. Yeah, yeah, yeah. We know those are big college sports. But there are so, so many more options out there, especially when you dive into the super fun and varied world of college intramural sports. Here’s a look at a bunch of fan favorites.

Although it may not be as popular as Quidditch, Segway polo is quickly rising in numbers of college intramural sports. The game is just like polo, except where horses were once running, the 21st century has replaced them with Segways. Each player is equipped with a polo staff and Segway in order to go into battle.

This is an insanely vibrant game of seeing who can hit the target as many times as possible with exploding dye shots. Except the target is moving and it is probably the enemy. The object of the game is to purposefully hit the team or individual on the opposing team without getting hit yourself. Many games are played on outdoor terrains with movable props where you can take shelter from the colors splattering around you. Though plenty of colleges offer paintball it as standalone intramural sport, many university teams also play the game to strengthen teambuilding and teamwork. A quick warning if you decide to join in on the fun: you may have some battle-worthy bruises in store.

Do you remember when your cool friend was given a foam sword for their birthday? And how you two would fight imaginary monsters with them? At some universities, Swords is the game played where two groups meet on the school lawn and battle with these foam swords and other soft weaponry. (Different from fencing!) Practices include battle techniques, teamwork, swordplay, and javelin or knife throwing. The workout is insane and it is amazing of how much more agile you will become.

Hands up who has ever read Harry Potter? Well, for those of you who do not know, in the wizarding world of Harry Potter, Harry attends a magic school where their main school sport is Quidditch. Sadly, as muggles (aka non-magical humans), we cannot fly broomsticks, so instead we have created our own game of Ground Quidditch. There are four positions in which two players are on the defensive and two are on the offensive. Those on the offensive have to throw one type of ball through three metal hoops to earn points, whilst their defense must guard their own goal hoops. There is one player, called the Snitch, who does not play for either team but runs around in gold attire. The object of this player is to avoid being caught by special offensive players of each team, the Seekers. The Seekers chase after the Snitch, who, if caught, gives extra points to the winning team and the game ends.

Those Friday nights spent at the bowling alley in high school weren’t for naught. Bowling is quickly becoming popular at many universities, with some scholarships even being awarded at certain schools. If you’ve never enjoyed the game before, the object is to throw a bowling ball, weighing about 10 pounds, down the alley and knock all the pins down. Games usually last about an hour and a half, but there are certain techniques to be learned in order to become pro. In this intramural sport, you will learn about everything from velocity to how much spin to put on your ball. Time to dust off your dad’s bowling shoes from 1987, because it’s your time to shine!

This game is seen at idyllic family picnics and backyard barbeques. In cornhole, aka beanbag toss (among many other names), you throw a beanbag from a distance onto a slanted piece of wood—ideally into a hole in the wood. Where the beanbag goes in determines your points. Mix in frat boys and sunburns, and, well, cornhole gets a little crazy.

Were you always the last kid to be picked for a football team in middle school because of how small you were? Not to fear, sprint football is here! In this game the player cannot weigh more than 172 pounds, according to the official rulebook. Famous people like Jimmy Carter and Joe Biden have played sprint football during college. The game is exactly the same as regular football, including full contact, but the player’s main goal is to be quicker and more agile than the norm. If you are good at running, you will undoubtedly be able to run the football all the way to the end zone.

This new sport has been gaining in popularity on the East Coast. The Woodsmen is a student athletic club that practices loggings skills such as logrolling, the standing block chop you see in all the movies, sawing, and pole climbing. These are the true pioneers of the great outdoors; brain and brawn are required for these hearty classics of American culture.

Imagine the game of golf. Now imagine instead of holes in the ground with flags coming out, there are metal baskets standing upright. Oh, and take out the golf balls and add a bright yellow Frisbee. And you have Frisbee golf! Players compete in this game by throwing a Frisbee into each basket from a certain point on the course. The teams have to take into account the obstacles of wind, strength, and sometimes even tossing over a lake!