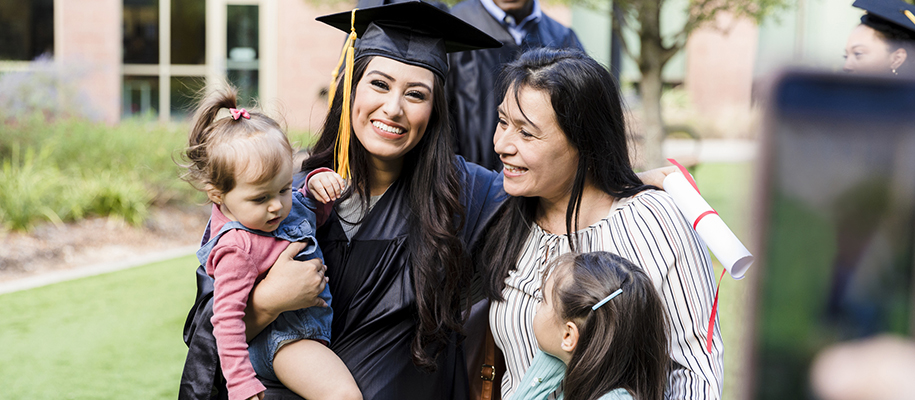 Eve Huizar finished up her master’s degree in advertising while on bed rest during pregnancy. But babies don’t exactly adhere to course syllabi, and just as she was setting up the webcam for her final online exam, Huizar went into labor.

“The exam proctor kept asking, ‘Are you okay?’” recalls Huizar, 31, who received her master’s degree from Boston University in 2010. “I said, ‘I can do this.’ I got through it,” she adds with a laugh. “They monitored my labor from the nurse’s station. I didn’t want to take the test with a newborn baby.”

Students like Huizar, who juggle graduate school with family and work, seem to share a common sense of determination. “I definitely made some sacrifices,” Huizar says, “but it was worth it.” Her master’s degree, she says, helped her land a great job at Microsoft.

Without question, going back to school involves a major investment of time and money. Why spend money on graduate school instead of, say, a shiny new car or vacation to Hawaii? Many say the rewards of education far exceed the costs, and a new array of options, such as online, blended, and weekend programs, make graduate school more flexible than ever before.

Laura Gilbert, Ph.D., wrote her book Back to School for Grownups after getting her law degree from Hamline University in Saint Paul, Minnesota. It was her third time returning to school as an adult, so she knows a bit about the juggling game. Her secret to success? Letting go of perfection.

“I had to redefine what ‘best’ meant for me,” she says. “Suddenly a kid has a basketball game, the washing machine dies, the cat gets sick, and finals are coming up . . . I grew up getting A’s or B’s. Sometimes a C had to be the best on top of everything else.”

Indeed, as Huizar, Gilbert, and others well know, balancing graduate school with a full life takes grit and careful planning. Here are 10 tips to get you juggling like a pro.

A clear sense of purpose can help keep your eyes on the prize. Gilbert finds that adults typically go to graduate school for one of three reasons: to change jobs, to advance a career, or to fulfill a personal goal. It’s important, she says, to be moving toward a goal. “It should be, ‘I want to do that,’ as opposed to, ‘I’m hoping it will fix me.’”

Since you’re bound to encounter some rough patches along the way, it helps to establish your commitment upfront. “In my experience, self-awareness and self-management are the key,” says Richard Maloney, faculty advisor for Boston University’s graduate program in Arts Administration. “You have to understand what your needs are and respect yourself and your needs enough to advocate effectively for them.”

2. Look for a flexible program

You never know what the future will bring, so look for a program that will let you speed up or slow down your pace, if need be. While online programs offer the most flexibility, they also require the most discipline. Many on-site and hybrid programs are geared specifically to the needs of working adults, but even so, it helps to go in expecting the unexpected.

For Philip Kolling, a 2014 graduate of the Managing Mission-Driven Organizations program at Marlboro College in Brattleboro, Vermont, the “unexpected” meant a new job and baby in the course of his graduate program. He decided to add extra classes during his wife’s pregnancy so he could slow down once the baby arrived. Around the same time, Kolling got a promotion from Project Supervisor to Executive Director of SerVermont, Vermont’s Commission on National and Community Service. The new job required a bigger time commitment, but his program let him Skype a class he had to miss. “It was like, I can have my cake and eat it too,” he recalls.

3. Involve significant others in the planning

Once you’ve picked out a program, you can involve others in the planning. “It has to be a team commitment,” says Sean Conley, an Associate Dean at Marlboro College. “Others need to see this has an upside for you as a family.”

Conley recommends working out a temporary schedule with significant others. For example, you and your spouse may decide that for the next four weeks, you’ll get the kids off to school in the morning and take the evenings to study. At the end of four weeks, reassess the schedule. What worked? What needs to be tweaked? This communication prevents resentment from building up.

Steve Gordon, 34, an aerospace manager, father of three, and 2014 graduate of the Saturday M.B.A. program at California State University, Long Beach, reached out to his children as well as his wife. “I know it’s tough,” he told them, “but you can help by telling me what’s really important and what you can cut me slack on.” They decided, for example, that birthdays were important but could be scaled back from big parties to more intimate family affairs.

Even the most supportive of partners needs a break. Try to spread around the responsibilities so no one person gets overtaxed. If you’re feeling stressed about a big school project, try tapping your classmates for advice and support.

Gilbert was a single mother of four children, ages four, six, eight, and 10, when she went back to school for the first time to transition from music teacher to human resources professional. Without any relatives in the area to help pick up the slack, she found it “heart-wrenching” at times to miss her kids’ games and recitals but set aside “sacred time,” such as Sunday nights with the family. Her children learned to take buses and get rides from classmates to their activities. “They became very independent,” she says. “They value their own education.”

Going back to school means you’ll have less time for vacations, social events, and TV. But once you graduate, life can go back to normal. “I’d come home from weekends drenched in academia, and my wife was tired and drenched in baby drool,” recalls Kolling. “But it’s pretty finite. There’s an end date.”

Gordon credits Google Calendar with helping him stay on track while two of his classmates dropped out of the program. “They both underestimated how much time it would take,” he says.

Conley, who counsels students at Marlboro College, is also a graduate student himself, working on his doctorate at Columbia University Teacher’s College. To juggle his multiple responsibilities, he uses a time-management system called the Pomodoro Technique. “It’s such a funny idea,” says Conley, 49. “Pomodoro means ‘tomato’ in Italian, and it’s based on an Italian tomato kitchen timer that’s 25 minutes long. I’ll take the phone off the hook and focus on a project for 25 minutes. Then I’ll get myself a cup of coffee. It’s had a huge impact on me.”

7. Communicate with faculty members and peers

When family or work responsibilities get in the way of school, let your professors or faculty advisors know. At Boston University, Maloney works out alternative arrangements with students. “If you are having a problem at work and it is somewhat connected to the material being studied in class, ask your professor if you can present it to the class for discussion,” he says. “Your classmates will get to practice applying their business analysis skills to a ‘real’ problem and may come up with a potential solution you had not considered.”

While your roles as student, worker, and family member are bound to conflict at times, they can also complement each other. Many students wow employers with new skills they pick up in the classroom. Huizar, for instance, used her new knowledge of e-commerce to drive new traffic to the website she developed for her boss’s automotive accessories stores. “I started with a tiny little informational website that got 1,000 users a month,” she says. “I brought it up to 45,000 a month.”

Gilbert, in turn, involved her children in her schoolwork. “I’d do my presentations for them and know that, if they were bored in five minutes, others would be in 10,” she says. In law school, she’d turn case studies into bedtime stories for her grandson, starting with “Once upon a time . . . ”

9. Take care of yourself

At the end of the day, after you’ve dedicated so much time and energy to meeting the needs of your professors, coworkers, family, and friends, don’t forget about meeting your own needs. It’s actually crucial to accomplishing your educational goals—and you won’t make it to graduation if you burn out along the way.

Eve Espindola, a student in the part-time M.B.A. program at CSU Long Beach, treats herself to a massage at least once a semester. “I try to do it right after I finish a project or exam,” she says. She also tries to exercise, eat right, and get enough sleep, although she admits that’s sometimes a challenge.

Be open to soaking up new knowledge and engaging with faculty members and fellow students. Networking can help open up new doors for your career. “I loved it,” Huizar says about her time at Boston University. She even found school a comfort rather than a burden while she was on bed rest. “The graduate program was my saving grace,” she says. “It allowed me to focus on something other than going stir-crazy. You can only watch so much TV.”