Inside an Interviewer's Mind 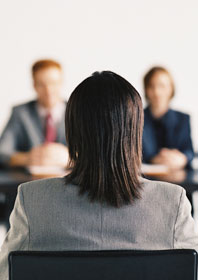 Whether you're embarking on those first post-grad job interviews or you're gearing up for the internship or co-op interviews to come this semester, it helps to have a little insight into what your interviewer is thinking. Or, rather, not thinking. Here, author Andrew LaCivita shares chapter two of his book Interview Intervention: Communication That Gets You Hired, discussing what really goes on in an employer's mind during and after the interview.

Behind the Scenes--An Insider’s View

Your qualifications get you the interview. Beyond that, they have very little to do with getting you the job.

The truth is once you secure the interview, your job qualifications and fit for the company have very little to do with whether you are offered the job or not. Realize, if you have already secured the interview, through either your own means or someone else’s, the hiring company has essentially granted that you have qualifications worth evaluating. So what happens between the time you begin your first interview and the company’s decision whether or not to hire you? People speak to each other.

There are three reasons you actually get the job. Unfortunately, you can only control one of them.

Based on my observation from thousands of interviews between my clients (the hiring companies) and candidates (prospective employees), I have concluded that a candidate’s attainment of the job is largely contingent on three often undetectable success factors:

Can you hear me now?

It might be easier to think of the first two issues, which require interpretations, by another name—communication gaps. Essentially, I refer to these gaps as encoding and decoding issues on the speaker and listener’s parts, respectively. The candidate’s role will obviously change from one to the other, as will the interviewer’s, throughout the discussion. Why do these gaps occur? Let’s review how this works in general. As communicators, we speak and listen with a certain bias that was formed from our perspectives of life, a particular situation, work history, and so forth. These biases are somewhat similar to the previously mentioned confirmation biases, but they are more systemic in nature. As a result, we often miss essential information about what others think or how they perceive our actions. This can be further exacerbated if either party does not accurately articulate what they think.

During your interview, you have knowledge of what you’ve accomplished, experiences you’ve gained, what you’re trying to communicate, and how the interviewer’s actions appear to you. You don’t, however, fully understand the interviewer’s needs or how you appear to her. As a result, you only have half the information necessary to accurately interpret the situation. The situation is made worse when neither of you are aware of it. Instead of recognizing these gaps, you fill them with your own assumptions. This occurs
naturally, leaving neither person feeling the need to clarify or question their reasoning or understanding. The most unfortunate part is that the candidate bears the greater burden of ensuring that neither misunderstands what is communicated (because theoretically the employer is the party with something to offer).

They won’t forget how you make them feel. And they’ll use two adjectives to remember it.

Your ability to influence the interviewer so she has a positive, favorable memory of you plays just as key a part in your interviewing success (albeit during the aftermath) as your ability to accurately interpret each other. There are two critical elements of importance related to her memory. The first occurs during the interview, as you plant the memory, and the second is related to how she later recalls it.

During your interview, the interviewer is simultaneously interpreting your comments and projecting your potential contributions and long-term fit within the organization. Her interpretations tend to be based on how she “feels” about you. You know who she thinks fits well in her organization? Someone she likes. This always brings to mind one of my favorite quotes by Carl Buechner, who said, “They may forget what you said, but they will never forget how you made them feel.”

Obviously, it is paramount that you impress the interviewer to elicit a positive reaction and feeling at that moment, but it is equally important to ensure she can recall it later. Why? Because an employer’s hiring decision simply does not happen in “real time.” Often, companies are meeting days or weeks later to determine which candidate to hire. Sometimes, in the worst and all-too- often cases, a human resources or recruiting official is chasing an interviewer a week or more later to gather her feedback from your interview. You need the interviewer to give you a thumbs-up. What now? You need her to remember that she “felt” you would be a great employee. Since your interview, she has interviewed three other candidates and has worked several projects amidst a host of meetings, working overtime, and navigating through a number of other “urgent” matters. How will she remember you?

Let me share some insight regarding how her memory works. There are many factors that influence memory, including the emotional charge (your first child), mood (stressed or anxious), distraction (am I prepared for that next meeting), age, and so forth. In addition to those emotional influences, there is the ever-present Forgetting Curve. Hermann Ebbinghaus, the German psychologist, conducted a well-known study that highlighted the pace at which we forget. In short, he showed the exponential decline in how quickly humans forget, with the sharpest decline occurring in the first 20 minutes, followed by the next largest within the first hour, before the leveling off occurs after one day.

Assuming the interviewer is now required to access her long-term memory, most of which is depleted, she can do that in one of two ways—recognition or recall. Think of recognition as a means of remembering through multiple choice options and feelings of familiarity (e.g., I’ve seen that face before). Recall, on the other hand, requires her to proactively search her memory on her own. As you can imagine, this requires much greater effort.

We have all had to do this before, so it is easy to believe that she would want to store information so she can retrieve it with as little energy as possible. Regardless of when the memory occurred, she will not be able to recall it with much detail. Instead, as psychologist Daniel Gilbert points out in his book Stumbling on Happiness, her brain has recorded the seemingly necessary details and will fill in the rest when it is time to remember. Essentially, she did not store your discussion in her memory in its entirety. Rather, she compressed it down to summary phrases (“short, red hair” or “great candidate”). Later, when she needs to recall the experience, her brain will quickly reengineer the memory, not by actually retrieving it, but by fabricating most of the information. This occurs so effortlessly that she will have the false impression that it was in her head the entire time.

You now need the interviewer to recall those summaries of you. You want her to remember phrases such as “positive energy,” “detail oriented,” “articulate,” “knew the technology,” “implemented it before,” and “team player.” I assure you she will not remember the details of why she thinks this, but she will definitely remember these impressions. I can certainly attest to thousands of interview debriefs I’ve conducted with clients, who relay how they felt about the candidate but are unable to explain in detail to me why that is. Sometimes these calls occur mere hours after the interview.

For now, simply be aware of these critical, unseen success factors related to interpretation and memory.